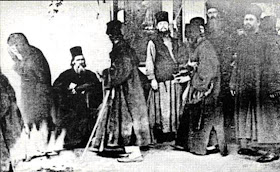 By John Sanidopoulos
The first-ever photo studio on Mount Athos appeared at the Russian Saint Panteleimon Monastery in the early 1870's. With the blessing of the elders, all events in the life of the monks were recorded on film. The photo history of the Russian Monastery lasted till the 1930's, but it gradually fell into decay due to lack of money. The Monastery’s pride is the negative of the photo above showing the giving of bread to poor monks, among whom they consider to be the Mother of God herself dressed as an abbess of the Holy Mountain.

The photograph above was taken on August 21/September 3, 1903 and released in 1997 from the archives of the Russian Athonite Monastery of Saint Panteleimon. It was taken as a souvenir photograph of an old custom: the Russian Monastery would give alms to the poor monks who lived in the Cells.

At the time it had been decided that this custom of giving alms to the poor monks would not be repeated the next year because the reserves of the Monastery had fallen. What may have contributed to this was the bad situation in Russia, which reduced donations to the Monastery.

Monk Gabriel, the photographer, decided to photograph this event for the last time to commemorate it. However, he noticed, amid the fathers, a woman moving in a wondrous manner. He therefore photographed the scene, and the woman that he alone saw was imprinted on the photographic paper in a flash.

According to the chronicle of the Monastery:

On August 21, 1903, as poor monks were receiving alms at the gates of Saint Panteleimon Monastery, Monk Gabriel took a photograph. When the photograph was developed the image of the Mother of God appeared miraculously to the left of the picture, humbly receiving a blessed crust of bread. Not long before, several brothers had clearly seen the Holy Virgin among the monks at the gate and wanted to tell the gatekeepers about it, but on the day the picture was taken no one had seen Her.

The fathers concluded that the All-Holy Virgin, who is the abbess over all the monks and ascetics of the Holy Mountain, was sad over the fact that it was decided this was the last time alms would be given to the poor monks by the Monastery, so they withdrew their decision to stop this act of charity.

In 1903, more than 1400 monks lived at Saint Panteleimon Monastery, while today there remain only some 35. 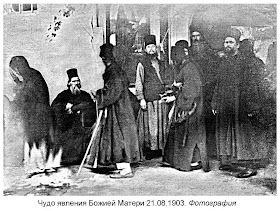 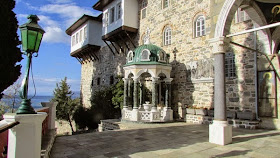 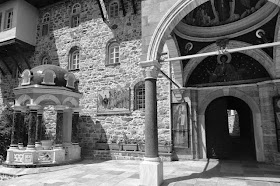 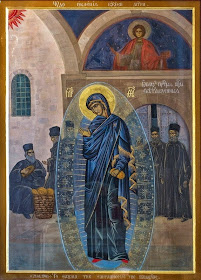