Steven Runciman and the Fall of Constantinople 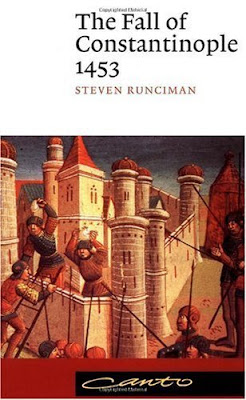 May 29, 1453. We mourn. We contemplate the mistakes, the difficulties, the dangers. We feel sadness for the loss of Constantinople, the beloved city. We reminisce the days of former glory. Without intolerance, but with wounded pride, with nostalgia, conscious that the past can never return. That is why we have no hostile feelings towards those who are masters of the City until today, but we remember.

For those who therefore insist to remember and for those who want to learn about the details of the fall of the "Queen City", which was called by Constantine Paleologos as "the Splendid City and Hope of the (Greek) Nation," they have only to consider the book titled "The Fall of Constantinople" (Cambridge University Press) written by the most valid and responsible scholar of Byzantium, the late British historian and vigorous philhellene, Sir Steven Runciman, who said: "The Greeks have a legacy for which they can feel proud of, a heritage that should not get lost in the changing physical conditions. In the darker ages of Greek history the (Greek Orthodox) Church was the one which, despite many difficulties, disappointments and even many humiliations, it did not only offer spiritual comfort but also preserved and maintained the traditions of Hellenism."

Before addressing the proposed book, the writer who is anything but random deserves a look. The late Sir Steven Runciman was the top Byzantinist of the past century. He loved the most misunderstood part of Greek history, even more than himself, and managed to drag from oblivion what admiration Byzantium had to reveal and highlighting it in Europe and worldwide. The multifaceted project is a documented record and interpretation of Byzantine history. If his writings leave something behind, it is the fact that he saw the Byzantines as a solid historical unit, which unit he impartially examined, giving future generations of historians the way to more thoughtfull study of it.

Greece owes greatly to Runciman, since he is the person who managed to largely remove the image of the Byzantine Empire from the stigma of the so-called period of decline, corruption and intrigue. He is the person who correlated the expression of medieval Hellenism to modern Greece. Due to Runciman, the English-speaking and the international scientific community at large has discovered the Byzantine Empire and lifted it from the condemnation of two centuries that Edward Gibbon created by calling its one thousand years of history as a "triumph of barbarism and religion".

The late Steven Runciman in the mentioned book describes with melancholy and anguish the last moments of the thousand year old empire doomed to be lost, but which is very proud to surrender. Also, in this classic description, he presents the painful shock that the conquest of Constantinople in May 1453 caused to Western Christendom. Explaining the causes of the fall of Constantinople, the author says that the churches of the City were neglected and the assistance sent (by the West) during this crisis was negligible.

Runciman does not concentrate only on the fall of the City, but goes two centuries back, and throws weight on what happened during the Fourth Crusade in 1204, which overthrew the Eastern Roman Empire. The British historian argues that the conquest of Constantinople by the Venetians and the Franks in 1204 and the installation of a Frankish Emperor in Constantinople was the highlight of the collapse of the Byzantine World. 1204 "was the first time that Constantinople had fallen into the hands of enemies since its foundation in 330 AD." And Runciman observes: "The shock of 1204 was therefore higher than in 1453, when the city fell for the second time. This time the disaster was not a precedent and did not come as a surprise. In 1453 Constantinople was already surrounded and besieged for a century, during which time the loop tightening around the city was more and more stronger." In this great work, Runciman also denies all critics of the (Greek Orthodox) Church and monasticism emphasizing that at the sea walls of the Queen City, one of the towers was defended by Greek monks.

History is above all narrative. And not only does it aim to revive historical time, but also interacts with tradition and with conscience - conscience of nation, language, religion and social organization. Runciman, as a seductive storyteller, but also as sound scientist, achieves the above goal with this excellent history, full of suspense and passion. He tells the story, and, as always, he tells it very elegantly.

From the magazine "On the Way" of the Holy Diocese of Limassol, Cyprus.

Translated from Greek by NOCTOC
John at 9:27:00 AM
Share
‹
›
Home
View web version