St. John the Russian and the Atheist Doctor 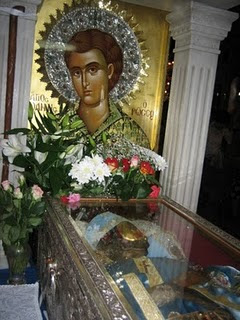 In the 1960's, a doctor who was a staunch atheist became ill with cancer of the rectum, one of the most serious cancers of that time, although now one of the more curable. After the diagnosis, the doctor fell into despair and for the first time in his life began to pray, "O God, I've never believed in You. I thought that all belief was nonsense, and that man should believe only in man and science. Now all my philosophy has lost its value. Accept my repentance, and if you think this prayer worthy, heal me in the name of St. John the Russian."

As he finished his prayer someone knocked at the door. A young doctor entered the room. "How are you doing, colleague?" he asked.

"No, you won't die," answered the young doctor, "I'm taking your illness on myself."

But the old doctor didn't believe him. "I have been practicing for a long time. I know what my disease means. Who are you?"

"I'm the one you asked for help," the young man said, and left the room.

The old doctor followed him out into the hall, but could no longer see him. He asked the staff, but they replied there had been no such doctor, and suggested that he was hallucinating from the shock of the diagnosis. But the old man was sure he had been talking to the saint. He insisted on another round of tests and the second exam showed that he was completely healthy. Dozens of specialists were called in to look at the x-rays; the one showing the cancer, and the second completely clear.