Brief Life by St. Nikolai Velimirovich
Achillios, this great hierarch and miracle-worker, was born in Cappadocia. He participated in the First Ecumenical Synod [Nicaea, 325 A.D.] at which he shamed the heretics and, by his learning as well as by his sanctity, he commanded great astonishment. Taking a rock, St. Achillios shouted to the Arians: "If Christ is a creation of God, as you say, then say: Let oil flow from this rock." The heretics remained silent and were amazed at such a request from St. Achillios. Then, again the Saint said: "And if the Son of God is equal to the Father, as we believe, let oil flow from this rock." And, indeed oil did flow to the amazement of all. St. Achillios died peacefully in Larissa in the year 330 A.D. When the [Bulgarian] King Samuel conquered Thessaly he translated the relics of Achillios to Prespa to an island in a lake which was called and even today is still called Achillios or Ailus.

- In ancient times, the Greek hero Achilles (Achillios) was believed to be from Larissa.

- A district of Larissa is called Saint Achillios after this Saint.

- There is a church dedicated to St. Achillios in Serbia that is architecturally unique. Read more here.

About the Islet of St. Achillios in Prespa of Macedonia

The islet is 800 meters from the pier. You can visit the islet whenever you want, making a simple phone call to the boatmen who will come to take you there. The beauty of Saint Germanos is unbelievable. According to local legend the small houses of the village must not exceed the number 11 because the 12th will fall down. The visitor stunned by the unexpected natural beauty, experiences the tranquility of a deserted land, away from the noise of everyday life.

Near the settlement, you will encounter the remnants of the three aisle basilica of Saint Achillios. This magnificent monument was built at the end of the 10th century by Samuel, ruler of Bulgaria (997-1014), in order to house the relic of Saint Achillios, bishop of Larissa. Prespa at this time was the center of the Balkan world, when Samuel used the region as his capital. It's dominance ended when Roman Emperor Basil II, nicknamed "the Bulgar-slayer", crushed his defiant northern neighbor in 1014. The 26 churches scattered throughout the Prespa region are reminders of this remarkable history. One of the most important objects found in the basilica tombs is a piece of golden cloth, displayed today in the White Tower in Thessaloniki.

Following the trail among apple trees and shrubs, you will arrive at the southern edge of the islet, where the ruins of the Monastery of Panagia Porfyra lie. Only the small church of the monastery stands there. It is decorated with remarkable wall paintings dating back to 1524 and 1743. 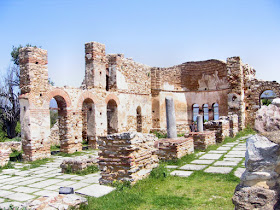 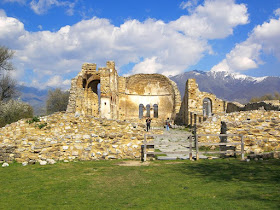 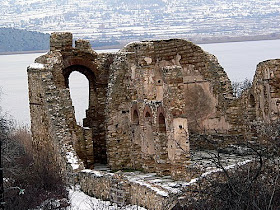 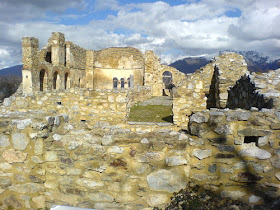 The Return of St. Achillios' Relics to Larissa

Over time the Basilica of St. Achillios in Prespa fell to ruins, and was uncovered almost a thousand years after the relics of St. Achillios were taken from Larissa, by a Greek professor from the University of Thessaloniki, Nikolaos Mitsopoulos, in 1965. The tomb of the Saint was found in the area of the diakonikon in the Holy Altar, which is an area relics are normally stored in a church, and arrangements were made for their return to Larissa.

It should be noted that Larissa never ceased commemorating its patron saint Achillios, honoring his tomb and celebrating his feast in the Metropolitan Cathedral dedicated to him. Over the centuries the locals would always turn to him in times of need and disaster seeking a miracle, especially in 1813 and 1848 when a plague took many victims. During the Frankish occupation in 1204 Larissa became deserted and the Cathedral was made into a base for bandits. On June 12, 1769 the Cathedral was burned down and demolished by the Ottomans, forcing the people of Larissa to have to travel to the surrounding villages for church services for about twenty-five years; the Turks would not allow its rebuilding. Through the efforts of Metropolitan Dionysios Kalliarchou and large donations from the people of Larissa (40 Pouches, or 18,000 piastres), which were issued to Sultan Selim, on 26 February 1794, permission was granted to rebuild. It took only 36 days to rebuild with over 200 Christians volunteering, the foundations being set on March 5th and the completion on April 6th, which was a Good Friday. The next evening Metropolitan Dionysios celebrated the Paschal Liturgy amidst a great crowd. An adjoining chapel dedicated to St. Bessarion was also built within this time. On 12 June 1822 the Turks turned the Cathedral into an arsenal, forcing the Christians to worship at the Chapel of St. Marina until the Church was restored to Metropolitan Meletios V. It was also during this time that trade at the marketplace changed to Monday instead of Sunday in Larissa, renewing the decision from 1730 by traders to keep Sundays and major feast days holy. With Sunday becoming a holiday, it was imposed on all, and those who broke this were forced to pay a fine to St. Achillios Cathedral in the amount of 50 aslan. It was because of the previous practice that St. Kosmas Aitolos was persecuted when he would preach to the people to not haggle on Sundays. In April of 1827 the Turks again turned the church into an arsenal, but the Christians soon bribed judges and pashas to keep it as a place of worship. What we see is that the people highly venerated St. Achillios while his relics were away and took care of his church to the best of their ability. 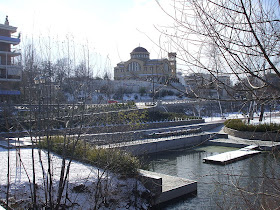 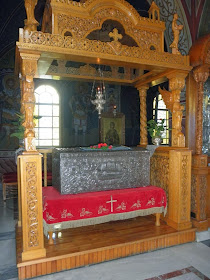 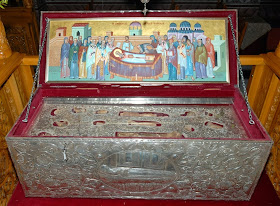 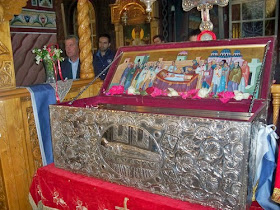 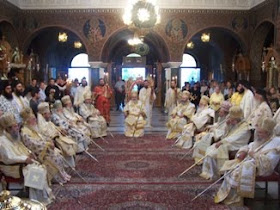 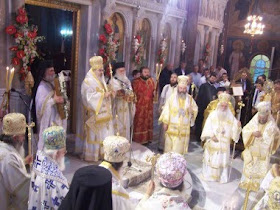 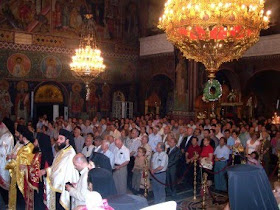 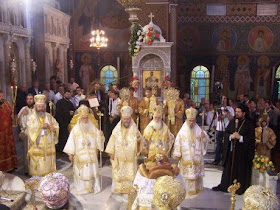 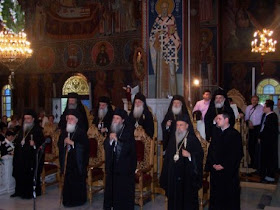 Apolytikion in the Fourth Tone
The truth of things hath revealed thee to thy flock as a rule of faith, an icon of meekness, and a teacher of temperance; for this cause, thou hast achieved the heights by humility, riches by poverty. O Father and Hierarch Achillios, intercede with Christ God that our souls be saved.

Apolytikion in the Fourth Tone
Grace has revealed thee as bishop and protector of Larissa and a wise hierarch, O blessed Achillios. By thy words and miracles thou didst preach the might of the Consubstantial Trinity, Whom we pray thee to entreat for those who praise thee.

Kontakion in the Plagal of the Fourth Tone
Let us all praise with hymns and songs divine Achillios, the brightly shining and unwaning star of all the world, who is Larissa's unsleeping and loving shepherd. Let us cry to him: Since thou hast boldness with the Lord, do thou rescue us from every raging storm of life, that we may cry to thee: Rejoice, O Father Achillios. 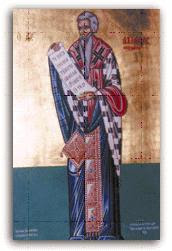