Shroud of Turin Mystery May Never Be Solved 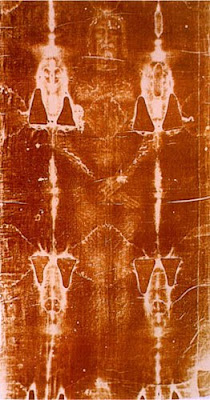 Shroud of Turin - Never Solved
Wednesday May 12, 2010
By Stephen Wagner
About.com
A while ago, I wrote an article called "5 Mysteries That Will Never Be Solved," which included how the pyramids of Egypt were built, the crash at Roswell, the Philadelphia Experiment, crop circles, and what happens to us after we die. Another mystery I can add to that list is the Shroud of Turin. It will probably never be resolved definitively that it is the burial cloth of Jesus of Nazareth.

While the latest scientific carbon dating estimates it was created somewhere between 1260 and 1390 AD, other scholars contest this finding. A leading Shroud expert, Bruno Barberis, director of the International Center of Sindonology in Turin, Italy, recently stated that "the studies made up until now permit us to say there is a very high probability the Shroud of Turin is the burial cloth of Jesus Christ." His evidence? "The injuries seen on the body of the crucified man in the Shroud bear an exact relationship to the wounds Christ suffered in his passion and death, as described by the four gospels of the New Testament."

This is not proof, of course, since someone creating a fake would simply have to consult the gospels for direction. He dismisses the carbon-14 dating as being inaccurate because the Shroud could have been contaminated in any number of ways over the centuries. And it certainly could have been. So far, there seems to be no certain way to prove the Shroud's authenticity.

And I don't think it ever can be, and here's why: Even if it could be proved with a high degree of probability that the Shroud dates back to the time when Jesus is thought to have died, and it could also be proved that it came from the region where Jesus lived, it still could not be proved that it was the burial cloth of Jesus. Many people were crucified as he was in that time period and so it could belong to someone else. It could even be a clever fake created in that day to commemorate Jesus' death. Could it be genuine? We can't say positively no because it is equally mysterious as to how the image was made on the cloth -- no one seems to know. I think this is another mystery that will never have a definitive answer.
John at 9:23:00 AM
Share
‹
›
Home
View web version