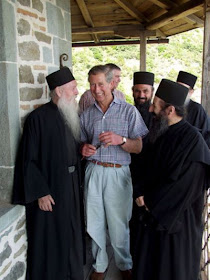 AS HE approaches his fifth wedding anniversary next month, Prince Charles is feeling the need for a male-only spiritual recharge: he is contemplating a solo sojourn to a monastery in northern Greece.

The religious enclave of Mount Athos, where no woman has set foot since the 11th century (and even female animals are banned), was a favourite retreat for Charles during his testing times with his first wife Diana. But since his marriage to Camilla Parker Bowles he has not felt the need to return, until now.

On previous visits to the remote religious community, the Prince has joined in prayer and meditation with monks during the mornings, spending his afternoons painting watercolours of the imposing monasteries dotted among the lush scenery.

Normally visitors to the self-governing republic have to share a dormitory, as well as the frugal lifestyle embraced by the monks, but in the only concession to his royal status, Charles is allocated a small whitewashed “cell”. He sleeps on a steel-framed bed with a foam mattress (possibly not the best choice for a man with an ever-aching back who is in his 62nd year).

There are nearly 2,000 monks housed in the republic’s monasteries, all of whom have devoted their lives to shunning sexual desire through prayer and following the Greek Orthodox faith. Every meal is taken in silence. 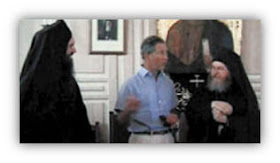 Charles was first introduced to Mount Athos by his father, who was born in Corfu and had to switch to Anglicanism from Greek Orthodoxy to marry the Queen. Philip’s mother, Alice, was deeply religious and became a nun in her later life. When she died in 1969 she left no possessions, having given everything away, and was buried, as she had requested, on the Mount of Olives in Jerusalem.

Speaking about Charles’s last visit, one of the monks said: “Your Prince is always welcome here. It is a place where he seems to have found a lot of serenity in his life. He is treated just like a fellow monk and lives just as we do, from the food we eat to the hours we keep.”

A senior royal source adds that, increasingly as he gets older, Charles “is seeking answers to spiritual and philosophical questions. Nourishing the spirit is very important to him these days. He is a man beset by many pressures, so he relishes the prospect of spending time alone, with the time to concentrate on spiritual matters.”

Clarence House has always adhered to the line that the Prince’s visits are considered “private” and gives no details of whether, and when, he would go but if he does travel to Mount Athos this year, it’s likely to be in May.
John at 11:57:00 PM
Share
‹
›
Home
View web version