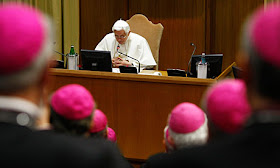 A group of Italian women claiming to have had affairs with Catholic Church officials has posted an open letter to Pope Benedict XVI calling for an end to priestly celibacy.

A priest "needs to live with his fellow human beings, experience feelings, love and be loved," the letter said, according to The Guardian.

The letter dismisses priestly celibacy as a "man-made" law that should be adapted to modern times. The letter was endorsed by a dozen women, but only three actually attached their names to it.

It was very painful to be "cast aside because of a sense of shame" felt by the priest, Salomone told CNN.

Salomone says she knows 40 women who are engaged in relationships with priests, ranging from sexual relationships to "special friends."

The letter pleads for understanding for women who "live out in secrecy those few moments the priest manages to grant [us] and experience on a daily basis the doubts, fears and insecurities of our men," The Guardian reported.

A spokesman for the Vatican, Federico Lombardi, would not comment Friday on the letter, CNN said.

The letter was posted online in March but was not picked up by the media until this week.

Celibacy has been an explosive topic in the Catholic Church in the past few months in the wake of a string of child abuse scandals in Ireland, Germany and the United States.

Benedict, however, came to the defense of "the principle of holy celibacy."

Antonella Carisio, another of the women who signed the letter, said she had an affair with a Brazilian priest. When the relationship was discovered, he was transferred to Rome, according to The Guardian. Before he left, he gave Carisio an engagement ring.

The priest in question has since denied the report, telling the globalPost news agency that he was "never in love with her," the Guardian reported.
John at 6:15:00 PM
Share
‹
›
Home
View web version