A Hymn For the Fall of Constantinople 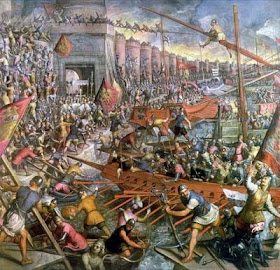 By St. Nikolai Velimirovich
THE FALL OF THE CITY OF CONSTANTINOPLE
Because of the sins of men, God permitted a bitter calamity to fall upon the capital of Christianity. On May 29, 1453 A.D., Sultan Muhammed II conquered Constantinople and executed Emperor Constantine XI.


HYMN OF PRAISE:
THE FALL OF THE CITY CONSTANTINOPLE [MAY 29, 1453]
& EMPEROR CONSTANTINE XI
Constantine the Emperor, Constantinople bravely defends,
And to God quietly prays, within himself:
"O Most-high God Who, from the heavens is looking
And injustice, you do not allow to defeat justice
Christians, against You, greatly sinned
And Your laws, have trampled greatly
Without Your permission, this battle is not
Because of men's sins, this blood sheds.
That this city falls, is it Your will
That they do not surrender, encourage my people,
That the Cross do not trample and to Islam go
But to endure bondage, until a freedom new
Let them servants be, let them even be slaves
Upon them, let hatred and ridicule befall,
But, with hope and repentance, let them endure
And, with bitter sighing, for former sins,
Until their sins, they wash away and every sin, they repay,
And until to You, they completely return.
If they have You, they will be rich,
All plundered treasures, You will replace.
Constantinople on earth, be or not be -
Constantintople in heaven, You established,
Where, with Your servants, you gloriously reign.
Before this Constantinople, behold, even I stand.
O Blessed One, on our sinful soul, have mercy,
When it is built anew, let the old one be razed!"
John at 10:12:00 AM
Share
‹
›
Home
View web version