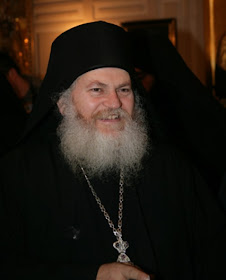 Father Ephraim unleashes both fire and meaningful messages against members of the Karamanlis government in an interview with the Kyrakatik Elefterotypia, shortly before the final verdict of the investigating committee for the Vatopaidi scandal.

He reveals that it was the then Prime Minister Karamanlis who had the initiative to meet with him at Holy Mount Athos back in July 2006! However, he insists that the only subject of the discussion was the creation of the 'Saint Gregory Palamas Foundation'. But, he avoids connecting the establishment of the Foundation at the Olympic land, even though its building plans had been in place since 2006, something the then Prime Minister knew about.

Regarding Th. Rousopoulos he declares: ”We have not had any contact these days because of the defamation he went through” and insists that their relationship was purely spiritual. He says that G. Angelou was visiting the monastery every Feast of the Saturday of Saint Lazarus, but “they had never asked him to intercede so that the exchanges of land would take place…”

He declares with meaning that they had been drawn into the exchanges “by the previous government”. He attributes this stance to the reaction of the local authorities and stresses that this was the reason why Xanthi’s land had been exempt from the exchanges.

Do you really feel that you have been the cause of the scandal? Did you make any mistakes in the Vatopaidi case? Do you go to confession? Do you have a spiritual father?

- Let me clarify first of all, that this case is not a scandal. It is about the longstanding ongoing effort to protect the monastery’s property rights on the Vistonida Lake and its surrounding land against the Greek government. It came to light and was presented as a “scandal” in order to darken the image of the monastery and its long-standing presence, which in reality it is a centre of attraction for thousands of Christians throughout the world. If I could turn the clock back, I am not sure if I would let the monastery been drawn into these exchanges. I would have certainly asked the Greek government to safeguard the interests of the monastery as a legal entity. If this was a mistake, it will be assessed once this furor settles down, after the completion of all investigations, many years from now, I am afraid. I have always had a spiritual father. Confession is one of the Mysteries of the Church. 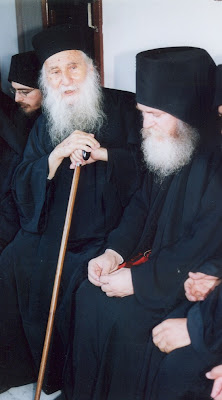 Who started the restoration of the monastery? Did you explain all these to the ministers of the former government? What help did you ask from them?

- The Great and Holy Monastery of Vataipedi became coenobitic in 1990, after the 18 monk brotherhood moved there, under my spiritual guidance. This task was especially difficult since the monastery had almost collapsed, most of the buildings had not been restored, but had been deserted and some had almost given way. One could also find some priceless relics, manuscripts, incunabula, historic documents etc, which were in danger of being destroyed or lost. We took under our wing a monastery spanning 35 thousand square kms, which together with its surroundings occupied an area larger than 70 thousand square kms, with mostly deserted and ruined buildings. We then started thinking how to give back to the monastery its old prestige. Therefore, we began commissioning studies, restoring the monastery and applying for the European community funding programs. I had never discussed these issues with any minister. On the contrary, I can say that most ministers had shown a negative attitude towards our effort to protect our property rights and we had met with immense difficulties in looking after them.

Did you have any private discussions with the former Prime Minister? What was the reason for the meeting in question?

- The former Prime Minister visited the Holy Mount Athos at his own initiative towards the end of July 2006. According to the Protocol provisions, he previously had come into contact with the Holy Community and the monasteries he wanted to visit were Vatopaidi and Iveron. There was no particular reason for the visit and we had not had any discussion with the former Prime Minister on the issue of the land exchanges. On the contrary, we only mentioned the establishment of the ‘Saint Gregorios Palamas Foundation', which intended to carry out a multiple charitable operation, for which he had promised to help where he could.

What was your relationship with Th. Rousopoulos? Do you keep in touch?

- My relationship with Rousopoulos was purely spiritual. Unfortunately because of the developments and the defamation he went through, we do not keep in touch these days. Unfortunately, faith and spirituality had come to be regarded as a punitive act.

Do you believe that the circulation of billions of Euros through companies, some of them offshore, is consistent with the Holy Mount Athos’ spirituality?

- Firstly, I must clarify that Vatopaidi had never itself undertaken any entrepreneurship. This is not our mission. It is for this reason that the monastery has assigned the management of its funds to third parties, specialists. I must firmly declare that the monastic community uses these monies entirely for the completion of the monastery’s restoration, the restoration of the holy relics, the feeding and hospitality of monks and visitors and conducting its charitable mission.

You have an impressive number of visitors at Vatopaidi. What did you mean when you told the investigating committee that “We are a national centre, we are truly serving the nation?”

- In every Orthodox country, the monasteries are centers whereby tradition and religion are protected. Vatopaidi is one such monastery. It totally conserves the nation’s tradition and serves Orthodoxy. I believe this is a great mission, a mirror of our nation and an ark of Orthodox tradition. This constitutes a true honor for Greece because of all those who visit us, simple citizens and even national leaders.

Do you actually believe that there have been some government officials who secretly collected monies in order to supply you with the governmental pieces of land?

- I firmly declare, “No”. It would constitute a great injustice to pretend otherwise. In fact, we have asked that all our bank accounts be revealed so that it is shown where every amount went to. As far as I know, evidence from the Bank of Greece investigation shows that no monies have been given to any government officials from third parties. As far as the so called “prime pieces” of land are concerned, (this reference is clearly the invention by some in order to misguide the authorities and the public), I must tell you that the land that the government gave to Vatopaidi in exchange for its assignment of the Vistonida Lake and its surrounding areas, can in no way be described as “prime pieces”. On the contrary, most of the land they offered us was inappropriate for any use, either because some building regulations were in place, or it was forest land, or like the Olympic land, it did not fulfill the safety regulations for the construction of any institution. 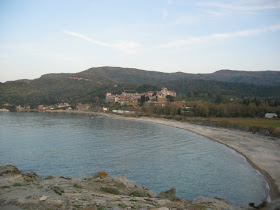 What would you give as a reply to Mr. Tsitourides statement that you had been directing the assignment of specific pieces of land which you desired, using a laptop?

- Firstly, I do not know the reasons behind Mr. Tsitourides lies. He was one of those who had recognized our property rights on the Vistonida Lake and its surroundings, and wished to proceed with the exchanges. However, I must firmly declare, that under no circumstances had we any knowledge of the available lands nor had we any right to pin point and chose. In any case, I do not know what is a ‘laptop’.

You have stated to the investigating committee that you had been drawn into the exchanges. Who had dragged you in and who benefited in the end?

- Since 1998, all governments had recognized with several documents and decisions, that Vatopaidi was the rightful owner of the Vistonida Lake and its surroundings. The act of exchange for this land was not our choice. It was the initiative of the then government who had to pacify the local authorities who had been demanding that we vacate the area, which led us to the exchanges. In his statement the President of the Litigation Committee of Xanthi, Mr. Ath. Xinides admitted that the exchanges were the result of their protests. Mr. Xinides was one of the most important local representatives and was related to the general secretary of the PASOK house committee. This was also stated to the investigating committee by other witnesses in 2008, like the former Minister of Agricultural Development, Mr. Basiakos and the former under Secretary Kontos. Why did the media never mention these truths to inform the public? We had been dragged into these exchanges, under pressure by the former government, and as a result we were made to look as if we had been participating in a political game, in which we had in fact been the losers.

What was your relationship with Mr. G. Angelou? Did you ever ask him to intervene in order to help you with the case?

- Mr Angelou had been visiting our monastery for three consecutive years during the Feast of the Saturday of Saint Lazarus. I had never ever asked him to mediate on anything.
John at 8:03:00 AM
Share
‹
›
Home
View web version