The Confusion of Babel and the Unity of Pentecost 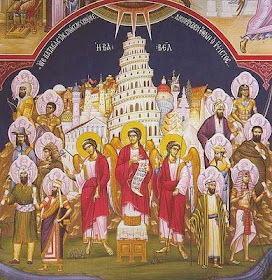 Kontakion in the Plagal of the Fourth Tone
When the Most High came down and confounded tongues of men [Babel], He divided the Nations. When He dispensed the Tongues of Fire [Pentecost], He called all to unity, and with one voice we glorify the Most Holy Spirit. 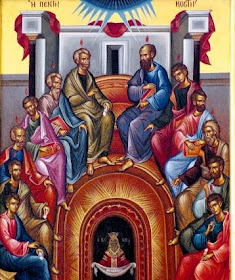 Proverbs 14:12 says: "There is a way that seems right to men, but in the end it leads to death." Whenever human beings forget how limited we are and try to take the initiative in our dealings with God, what inevitably follows is disaster. An example is the story of the Tower of Babel that we are told in Gen 11 where human beings decided to build a tower that would reach to heaven. In this way they would have access to God whenever they wanted, in this way they could manipulate God. But in the process of building the human bridge to heaven God came and confused their languages. They began to speak different languages, there was no more communication, no more understanding among them, and they could no longer work together. The result was the proliferation of languages and human misunderstanding.

Does the story of Babel remind you of the story we read today from the Acts of the Apostles, where the disciples of Jesus are speaking in other languages? Actually the two stories are related. But Pentecost is not a repeat of Babel, Pentecost is a reversal of Babel, and this for three reasons:

1. At Babel human beings decided to build a tower to God by their own effort with their own methods; at Pentecost it is now God who sends His Holy Spirit and shows the way by which mankind is to be united once more with God and among themselves through the Church. As the Apostle Peter proclaimed: "Repent and be baptized, every one of you, in the name of Jesus Christ for the forgiveness of your sins. And you will receive the gift of the Holy Spirit. The promise is for you and your children and for all who are far off — for all whom the Lord our God will call" (Acts 2:38-39).

2. The people of Babel tried to make a name for themselves. They were not trying to do God's will or glorify His name. The consequence of this was that God cursed them by confusing their language and thwarting their efforts. They were scattered and divided in anticipation of Pentecost.

3. Babel divided humanity through the confusion of tongues even though initially they came unified with one goal and purpose, while Pentecost united humanity by the common language of the Holy Spirit who alone can bring unity and mutual understanding even though the people came from many lands and of various tongues. Ideologically if people from all different types of languages, ethnicities and religions came together of their own initiative and bonded over a common goal, it would be hailed as mankind's greatest achievement. But God does not think as we think nor judge as we judge. Pentecost shows us that such ideologies should be absent from the Church, which is called to bring all people throughout the world in the one Body of Christ.

Pentecost is the final feast of the great mystery and dispensation of God's incarnation. On this great and saving day of Pentecost, the Apostles of the Savior, who were unlearned fishermen, were now made wise all of a sudden by the Holy Spirit, clearly and with divine authority speaking the heavenly doctrines. They became heralds of the truth and teachers of the whole world. On this day they were ordained and began their apostleship, of which the salvation of those three thousand souls in one day was the marvellous first fruit. 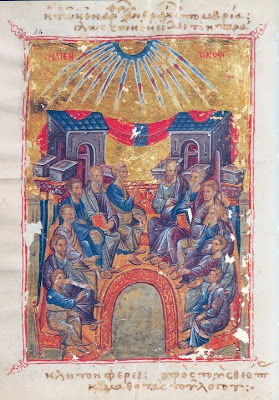