What Would You Do If You Had More Money? 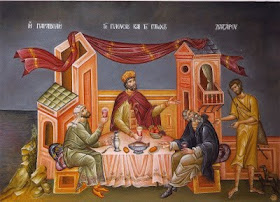 By St. Nikolai Velimirovich
You will hear this kind of justification from many who pursue riches: "When I become rich, I will be able to perform good works!" Do not believe them, for they deceive both you and themselves.

St. John Climacus knew in depth the most secret motives of men's souls when he said, "The beginning of love of money is the pretext of almsgiving and the end of it is hatred of the poor" (Step 16). This is confirmed by all lovers of money, the rich or the less rich.

The average man says, "If only it were that I had money, I would carry out this and that good work!" Do not believe him. Let him not believe himself. Let him look at himself, as in a mirror, at those who have money and who are not willing to do this or that good work. That is how he would be if he acquired some money.

Again, the wise John says, "Do not say that you are collecting money for the poor; so that through and by this you give help to them, in order to gain the kingdom; remember, for two mites the kingdom was purchased" (Step 16; Luke 21:2). Truly, the Gospel widow purchased it for two mites, and the rich man, before whose gates Lazarus lay, could not purchase it for all of his countless riches. If you have nothing to give to the poor, pray to God that He will give to them and, by this, you have performed almsgiving and purchased the Heavenly Kingdom.

When St. Basil the New prophesied to the empress, the wife of Emperor Constantine Porphyrogenitos, that she will first give birth to a daughter and then a son, the empress offered him much gold. The Saint refused it. The empress implored the name of the Holy Trinity that he should take the gold. Then, St. Basil took only three pieces of gold and gave it to the needy Theodora, who served him saying, "We do not need too much of these thorns, for they prick much."