Sermon for the Fifth Friday of Great Lent 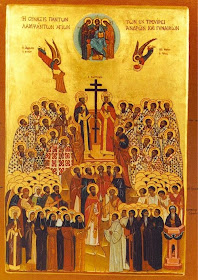 CATECHESIS 70: That We Should Endure Every Torment In Imitation of Christ and the Saints.

by St. Theodore the Studite

Given on the Friday of the 5th Week of Great Lent.

Brethren and Fathers, the previous instruction[1] no doubt pained you which indicated the trials that are being meditated against us. "But because of what I have said to you," says the Lord, "grief has filled your hearts; but I speak the truth to you" [John 16:6-7]. And again the Apostle: "It is not troublesome for me to speak, while for you it is a safeguard" [Phil. 3:1]. May we be safeguarded, then, with every spiritual safeguard, and if what is being said passes into act, we will meet it, with God's help, nobly; but if not, it will not be without advantage for us as our good God accepts such preparation and without toils and blows crowns those who thus choose.

Already Lent draws to its end and the time introduces the fair crown, that is the remembrance of the life-giving sufferings of the Saviour, in which we find the greatest consolation. For if our Lord and God was arrested for our sins, is it a great matter if we unprofitable servants should also be arrested for his sake? And if he was bound and led away and put in prison, is it so strange should we suffer the same treatment as the Master? Rather it would be exceedingly grievous not to encounter such things. But if we must be scourged, let us bear the scourges; and if we must be beaten, let us bear the beatings; and if we have to be spat on, let us bear the spittings; and finally if we must be put to death, let us bear that revered death. And good it is if anyone were to be found worthy to become a partaker in Christ's sufferings. This is blessedness, this is immortality.

Do we not hear what the Apostle says? "From now on, let no one make trouble for me; for I carry the marks of the Lord Jesus branded on my body" [Gal. 6:17]. As though he were saying: Let no one despise me, for I bear the adornments of Christ the universal King in my flesh. Such also was Saint Ignatios who was called God-bearer by his bearing in himself the Lord's sufferings. Such was St Eustratios who cried out in the midst of torments and said, ‘Now I know that Christ lives in me’. O blessed voices and thrice-blessed souls! Whose memorials then do we celebrate? Whose nativities do we feast? To whom do we erect sacred churches, whose relics do we venerate? Is it not those of the Martyrs? Those of the Confessors? Those of the Ascetics? And if here they have been found worthy of so great glory, how much and how great the splendour they would enjoy in the age to come? Ineffable and unimaginable the reckoning! This is the fair business, this the blessed exchange: by small struggles and toils to purchase goods that are eternal and without end.

Let us too then imitate them, brethren; let us mingle our blood with the holy blood, for this is possible; for its nature is not dissimilar nor has He changed who says: "See, see that I am and I have not changed" [Cf. Dt. 32:39 and Mal. 3:6]. He loves all equally, He died on behalf of all, He sets before all inexhaustible delight, He is passionate for the salvation of all, and this to Him is riches, for He says "He is richly generous to all who call upon Him" [Rom. 10:12]. Therefore let us call upon Him in what befalls us and "He will give power and might" [Ps. 67:36] to our souls. Let us embrace Him and "He will bring our enemies to naught" [Ps. 107:14] both seen and invisible. Let us await Him and He will crown us for the day of resurrection of the dead, for the day of His appearing; for which may we too be found worthy to attain without condemnation and to stand uncondemned at his judgement seat, giving a good defence, in Christ our Lord, to whom be glory and might, with the Father and the Holy Spirit, now and for ever, and to the ages of ages. Amen.

1. Unless the renegade Alexander was more dangerous than St Theodore says, this does not seem to have been Catechesis 69. Moreover according to some MSS there was one for Thursday of this week, number 33 of the Large Catechesis. The latter speaks of no such threats.