Seeking the Pearl of Great Price 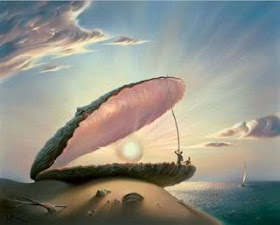 St. Paphnutius prayed to God to reveal to him, who it is that he [Paphnutius] resembled. He heard a voice which spoke to him, "You are similar to a merchant who seeks good pearls; arise and do not be idle!" But why would not God say to everyone of us that we are similar to a merchant who seeks good pearls? Because many of us do not seek pearls, rather we gorge ourselves with heavy layers of cheap dust. Not everything which the net raises up from the bottom of the sea is a pearl; sometimes, it is only mud and sand. The ignorant vie for that mud and sand as though it were a pearl. Only the merchant who recognizes a true pearl casts the net into the sea untold number of times. He hauls it up, sifts it of mud and sand, until he finds one seed of pearl! Why does God compare Paphnutius to a merchant? Because Paphnutius gave away all of his possessions, invested all of his effort and all of his time, in order to find that one seed of the true pearl. That true pearl is the heart cleansed of all passions and of evil thoughts and warmed by the flame of love toward God. Arise also, you man, and do not be lazy! Your marketing day is approaching its twilight.