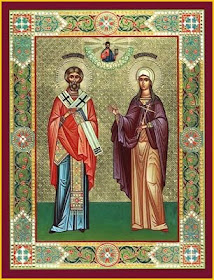 Sts. Chrysanthus and Daria and those with them (Feast Day - March 19)


Today we celebrate the Holy Martyrs Chrysanthos and Daria and with them the Martyrs Claudius the Tribune with his wife Hilaria and their sons Jason and Maurus, and Diodorus the Presbyter and Marianus the Deacon.

St Chrysanthos came from a pagan family who had moved to Rome from Alexandria. He received a fine education, and among the books he read were those in which pagans discussed Christianity. The young man, however, wanted to read books written by Christians themselves. He finally managed to find a copy of the New Testament, which enlightened his rational soul.

Seeking someone to instruct him in the Holy Scriptures, he found the presbyter Carpophoros hiding from persecution, and received holy Baptism from him. After this, he began to preach the Gospel. Chrysanthos' father tried to turn his son from Christianity, and finally married him to Daria, a priestess of Minerva.

St Chrysanthos managed to convert his wife to Christ, and the young couple mutually agreed to lead celibate lives. After the death of the father, they began to live in separate houses. St Chrysanthos converted several young men to Christ, and many pious women gathered around St Daria.

The people of Rome complained to the eparch Celerinus that Sts Chrysanthos and Daria were preaching celibacy and attracting too many young men and women to monasticism. St Chrysanthos was sent to the tribune Claudius for torture.

The torments, however, did not shake the bravery of the young martyr, since the power of God clearly aided him. Struck by this, the tribune Claudius himself came to believe in Christ and accepted holy Baptism together with his wife Hilaria, their sons Jason and Maurus, and all his household and soldiers. When news of this reached the emperor Numerian (283-284), he commanded them all to be executed. The Martyr Claudius was drowned in the sea, and his sons and soldiers were beheaded. Christians buried the bodies of the holy martyrs in a nearby cave, and St Hilaria constantly went there to pray. Once, they followed her and led her off for torture. The saint asked that they give her a few moments to pray, and as soon as she finished, she gave up her soul to God. A servant buried the saint in the cave beside her sons.

The torturers sent St Daria to a brothel, where she was protected by a lion sent by God. A certain man who tried to defile the saint was knocked to the ground and pinned down by the lion, but the lion did not kill him. The martyr preached to them about Christ and set them to the path of salvation.

They threw St Chrysanthos into a foul-smelling pit, into which all the filth of the city flowed. But a heavenly light shone on him, and the pit was filled with a sweet fragrance.

Then the emperor Numerian ordered Sts Chrysanthos and Daria to be turned over to the executioners. After many cruel tortures, the martyrs were buried alive in the ground.

In a cave near the place of execution [near the Via Salaria Nova, the catacombs in Rome], Christians began to gather to honor the anniversary of the saints' martyrdom. They celebrated Church services and partook of the Holy Mysteries. Learning of this, the pagan authorities sealed the entrance to the cave, and those within received the crown of martyrdom.

Two of these martyrs are known by name: the Presbyter Diodorus and the Deacon Marianus (also celebrated this day).

Later, when the tomb of Sts. Chrysanthos and Daria was looked for and found, the bones of these martyrs, and even the liturgical silver vessels, which they used for the celebration of the Eucharist, were also discovered. Everything was left as it was found, and a wall was erected so that no one could enter the place. Only through a window-opening in the wall could be seen the tomb of Sts. Chrysanthos and Daria, as well as the bones of the Christians killed in the tomb. This tomb, like so many others, was embellished by Pope Damasus, who had poems in praise of the martyrs engraved on marble and placed there. Gregory of Tours describes this sanctuary in an interesting chapter of his "De gloria martyrum", I, xxxviii (P.L., LXXI, 739). During the invasions of the Goths the sanctuary was desecrated, but later it was restored, as a metrical inscription composed at that time and falsely attributed to Pope Damasus asserts.

In the 9th century, some of the remains of Chrysanthos and Daria were brought to Prum in modern-day Rhineland-Palatinate, but the veneration remained largely local. In 1011 Pope Sergius IV gave Fulk Nerra, Count of Anjou, some of the martyrs' relics upon his return from a pilgrimage to Jerusalem. Fulk gave them to the monastery of Belli Locus which he had recently established. The relics of Sts Chrysanthos and Daria are found in the Church of the Holy Apostles in Rome. 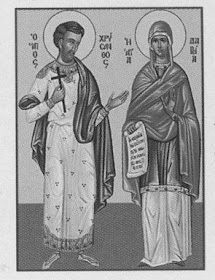 HYMN OF PRAISE
By St. Nikolai Velimirovich
Saint Chrysanthos counsels Daria,
O virgin, forsake the lie
And do not venerate the idols as gods;
Neither seek, you, truth from the world.
The truth is in the One God,
The One Triune God
Who created the heavenly armies
Of angels and heavenly powers;
Who created the whole universe,
And of the universe, man, the crown.
The only One, immortal and living,
He, out of the earth, creates wrappings
And the clothing of spiritual wealth.
Our soul is spiritual wealth
Wrapped up in the dust of the body.
The soul should be tenderly nurtured
As a bride to make ready for Christ.
Forsake, O virgin, the bodily,
It leads to suffering and sorrow.
God does not look into the vessel of the flesh
But at the flower which grows in it.
O virgin, clothed in death
Today, tomorrow consumed by death:
Adorn your soul with the flower of virtues,
Sow the flower with faith in the Lord,
Enclose it with hope and love,
Water it with the Life-creating Spirit,
Weed it of the weeds of sins,
Let grow the flower of virtues,
Let grow the flower of piety,
Let grow the flower of charity,
Let grow the flower of repentance,
Let grow the flower of patience,
Let grow the flower of abstinence,
Let grow the flower of obedience.
As a hymn of Paradise, your soul is,
Let it smell like a garden in May.
And may God to dwell therein,
For which He created it.
Daria listened to Chrysanthos,
Her soul to Christ she wedded,
Her body to torture she submitted
With Chrysanthos, her spiritual brother.
And God transplanted them to Paradise,
With them, adorned the garden of Paradise.
Apolytikion
Let us honor the like-minded pair of Martyrs, Chrysanthos scion of purity, and supremely modest Daria. United in holiness of faith, they shone forth as communicants of God the Word. They fought lawfully for Him and now save those who sing: Glory to Him Who has strengthened you; glory to Him Who has crowned you; glory to Him Who through you works healings for all.
Kontakion
O Chrysanthos, in the sweet fragrance of holiness thou didst draw Daria to saving knowledge. Together in contest you routed the serpent, the author of all evil, and were worthily taken up to the heavenly realms.