Saint Basil was born in 1587 in the very old town of Yaroslavl. Yaroslavl was an important port on the Volga River. Basil's father Theodore was a poor merchant and his family often had very little food.

Even when he was a very small boy, Saint Basil used to go to the church every time he could. He loved God's house and wanted to be there more than anyplace else.

In those days, when a boy was twelve years old, he could become an apprentice. An apprentice is someone who works for a company without pay just to learn the business. The boss pays the boy's father a certain amount and then gives the boy food and a place to live.

Siberia was a very dangerous place, full of wild animals, war-like native tribes and lawless men. The journey to Mangazeya was long, difficult and full of danger. When Saint Basil arrived there safely, he hurried to the church to give thanks to God for protection on the road. Then he went to the merchant's office where he was given the job of clerk. Saint Basil was a very good and careful worker. Soon he was given a more responsible job in the company. 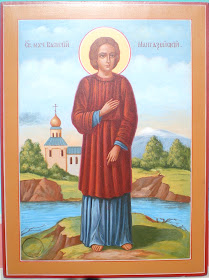 Unfortunately, at that time Siberia was a frontier area, and there were almost no women there. Because of this, some men who had beastial passions used to commit homosexual acts with young men and boys. Saint Basil's boss was one of these perverse men. Soon after Saint Basil had arrived in Mangazeya, the boss tried to entice the youth into homosexual relations. He tried flattery, he offered Basil money and finally, he tried threats and punishments.
Saint Basil only continued to fast and pray and ask God to help him remain pure.
The boss began to hate Basil. He was angry that he would not submit to his evil lust, and he hated Basil's prayerful, religious life. He especially hated Basil for his meek and humble personality. But no matter how much he persecuted and mistreated the innocent lad, Saint Basil continued to faithfully and honestly perform all his duties and responsibilities.
Finally, the persecutions and slanders reached a terrible point. During the Paschal Matins, thieves robbed the merchandise house in which Basil worked. The boss, discovering the theft, went to the governor and reported the theft. But then a terrible deed occurred: the merchant hated Basil so much and the evil in him was so strong that he formally accused the innocent of being the robber.
Thus, on the day of Christ's Bright Pascha, when the Holy Church calls all people to peace and love, this innocent, God-fearing boy was betrayed by a false witness, just as Christ had been betrayed by false witnesses. The governor did not even investigate the charges. He sent officers to arrest Saint Basil and drag him right out of the church. The governor and Basils boss began to torture the boy in order to force a confession out of him. In spite of all the fierce tortures, the blessed one would only reply meekly: "I am innocent."
The pain of the torture became so unbearable that the youth fainted, but when he came to, he again quietly repeated, "I am innocent."
The meek, humble, Christ-like endurance and peaceful reply of the young saint enraged the evil merchant even more. Finally, he flew into a demonic rage and struck the innocent virgin on the head with a heavy chain of keys. Saint Basil fell to the floor, sighed heavily and gave up his pure soul into the hands of the Lord, on the day of Christ's Radiant Pascha, 1600. 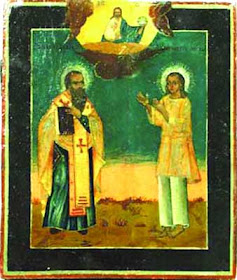 In order to hide this foul crime, the Governor, Mr. Pushkin, and the passion-crazed merchant, placed the body of the holy martyr into a rough coffin and lowered it into a nearby marsh, weighed down with stones.
Rumors of the brutal murder circulated around the town of Mangazeya almost immediately after the incident, but God chose to conceal the sacred relics of His saint for fifty-two years. 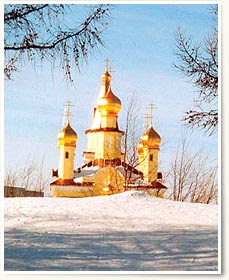 In 1652, during the tenure of the military governor Ignaty Stepanovich Korsakov, God willed to reveal the glory of His Virgin Martyr. In that year, many wondrous events began to occur in the area around Mangazeya. Many pious people had dreams in which a beardless youth appeared to them and many ill people were healed by this holy boy. A strange light was seen over the marsh and unseen voices were heard chanting nearby.
Then, the coffin of the saint rose slowly to the top of the mud. A pious archer, Steven Shiryaev, noticed the coffin, but did nothing about it. Saint Basil appeared to him in a dream and told him to open the the coffin. The whole story of Saint Basil's martyrdom became known.
The coffin was brought out of the swamp and opened. Inside they found the sacred relics of the saint, whole and incorrupt. A chapel was built over the relics and many people received healing through the prayers of the young martyr.
Holy Virgin Martyr Basil of Mangazeya, pray to God for us! 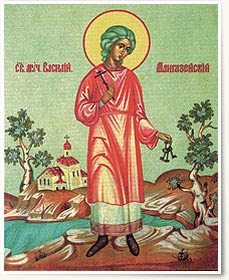 Apolytikion
Thou O Basil didst witness unto death to the glory of virginity, and having been cast into the darkness of a swamp by thy cruel tormentors, thou didst ascend to the heights and shine forth with the glory of the Eternal Light, wherefore we cry to thee rejoicing, glory to Christ Who has glorified thee, glory to Him Who has made thee wondrous, glory to Him Who worketh healings for all through thee.
Kontakion
Chosen Martyr of Christ, patron of missionaries, protector of those who struggle for chastity, we see thee as a radiant lamp in the darkness of a wicked and perverse generation. And since thou hast been thrice-crowned by our Saviour, free us from passions, who cry to thee: Rejoice Holy Martyr Basil, radiant light of virginity.
Source
John at 12:15:00 PM
Share
‹
›
Home
View web version