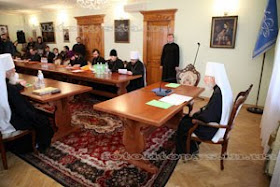 KYIV — On March 25, 2010, at the Kyiv Cave Monastery the first session of the Inter-Conciliar Presence Commission for Counteracting and Overcoming Ecclesiastical Schisms of the Russian Orthodox Church was conducted. The commission was chaired by the primate of the Ukrainian Orthodox Church-Moscow Patriarchate (UOC-MP), Metropolitan Volodymyr, reports the web site of the UOC-MP.

- elaboration of the practical recommendations on prevention and healing of schisms;

- acceptance to the church of the clergymen and laity coming from schisms;

- the issue of the church remembrance of people remaining in schism;

- oikonomia and akriveia in recognition of the Sacraments performed in schismatic communities.

Metropolitan Volodymyr noted that the first session of the committee is being held in Kyiv not only as “an expression of respect for the ancient capital of the Kyivan Rus’…It is also a response to the urgent need of the Ukrainian Orthodox Church. For the problem of church schisms is especially urgent in Ukraine,” he noted.

As the result of the session work, the following priority subjects for further work of the committee were defined:

- overcoming the schism in Ukraine;

Metropolitan Volodymyr noted that the call to seek unity, “a clear pastoral imperative,” is coming first of all from the head of the ROC, Patriarch Kirill, who during his visit to Ukraine in 2009 called to do everything for the “Church of Christ in Ukraine…to have again the strength and possibility to embrace in its motherly arms all of the faithful children.”

The hierarch also noted that the UOC-MP proposes numerous initiatives to overcome the schisms.

The head of the Department of External Church Relations of the Russian Orthodox Church, the deputy head of the committee Metropolitan Ilarion of Volokolamsk, noted that today in Ukraine a favorable situation is emerging for overcoming the schism. He said that the political reasons causing the spread of the schism are becoming the past.

The committee decided that the results of its work can be commented on only by the head and the deputy head of the committee or persons authorized by them.
John at 9:35:00 AM
Share
‹
›
Home
View web version