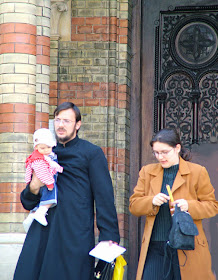 The Romanian Orthodox has decided to strip clergymen who divorce of their priestly duties.

Church spokesman Constantin Stoica says the decision to defrock priests who divorce will apply to all. But he says that those whose marriages broke up because their wives committed adultery will find other employment within the church.

Stoica said Friday that the decision was triggered after the number of divorced priests reached 500 out of a total of 16,000.

Those already divorced or remarried will not be defrocked. But they will not be promoted to high positions and will not be able to teach at theological schools and universities.