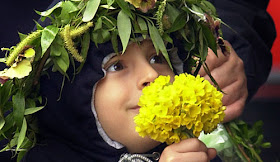 Tsvetnitsa-Vrabnitsa (Palm Sunday) is one of the biggest Bulgarian holidays, rich in a variety of customs, songs and melodies. The holiday is held annually on the last Sunday before Easter and it is the people’s belief that this is the holiday of the fields, meadows and forests.

Being one of the most beautiful spring holidays it celebrates the day of the entrance of Jesus Christ into Jerusalem, when he was welcomed with palms and olive branches. Bulgarian Orthodox tradition uses more readily-available willow branches instead of palm ones, and people wind them into small crowns they put on the head of young kids for health and blessing.

The Lazarovden ceremonies, called Lazarouvane, are among the best-loved Bulgarian traditions. The Saturday before Easter is a festival devoted to young girls, pastures, fields and woods. In Bulgaria's village communities, Lazarovden was quite an event in the life of every young girl, for then she could demonstrate to the townspeople that she had already grown to be a "complete maiden". The girls would gather in groups of about ten at the house of the prettiest one and start from there with their songs to make a round of the village. The songs sung on St Lazar's Day praise the beauty of the maiden and her lover, the industry of the farmer, the purity of maternal love and express wishes for happiness and prosperity.

Early in the morning on Tsvetnitsa the young girls who have been ‘lazarki’ on the previous day go to the nearest river. After they find a place where the water is calm they put pieces of traditional bread on willow barks and throw them into the water. The girl whose bark outsails those of the others is pronounced for ‘kumitsa’. She invites everybody to her house where they all sit down to a table on which traditional bread, hominy and mashed nettle are served. Groups of young girls, wearing the traditional national costumes, carry hand baskets to collect eggs as gifts and sing the Lazar Day songs. 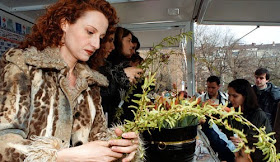 Passersby near churches in Bulgaria on March 28 2010 will see one of the more colourful sights in the church calendar as Bulgarian Orthodox Christians don crowns woven from willow branches in celebration of Palm Sunday.

Palm Sunday, known in Bulgarian as Tsvetnitsa (Цветница) or Vrubnitsa (Връбница) will this year be shared, albeit according to different rituals, with the world’s Protestants and Roman Catholics because 2010 sees the Western and Eastern church calendars place Easter on the same date, April 4.

Palm Sunday commemorates the event in the Christian story in which Jesus entered Jerusalem and was greeted by people waving palm fronds.

In Bulgarian Orthodox Christian tradition, the fasting rules also change, to allow the faithful to eat fish, a change from the Lent rules ahead of Easter that require abstention from all meats.

Churches tend to be crowded, with worshippers queuing for willow branches before entering. The willow branches are worn as crowns by girls, but latterly often boys as well, and women.

Vrubnitsa, which may be translated as Flower Day, has links to the symbolism of resurrection, as spring arrives in the northern hemisphere. In Bulgaria, it is the Name Day for people with names derived from flowers, for example: Violeta, Tsvetelina, Lillia, Yavor, Yassen, Roza, Iglika, Latinka, Margarita, Temenuga, Karamfila, Zdravko, Kameila, Zjumbjul, Nevena. Hence flowers are given as Name Day gifts. 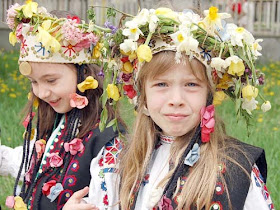 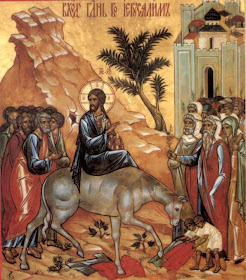