Holy Fathers Slain at the Monastery of Saint Savvas in 797 A.D. 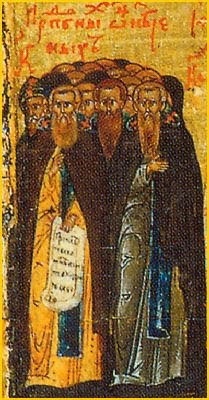 Double crowns from the hands of the Lord,
You received due to your labors and your blood.
On the twentieth the Abbas from the earth went far to the heavens.


Saints John, Sergios, Patrick and others, a total of twenty Holy Fathers, were slain in the Monastery of Saint Savvas on March 20th of 797. During the eighth century the area around Jerusalem was subjected to frequent incursions of the Saracens, who are specifically called Ethiopians or "Blacks" in the Synaxarion of Constantinople. The Monastery of Saint Chariton was devastated and fell into ruin. Twice the Saracens tried to plunder the Lavra of Saint Savvas the Sanctified, but God's Providence protected the Monastery. The monks would have been able to escape the barbarians by going to Jerusalem, but they decided not to forsake the place where they had sought salvation for so many years. 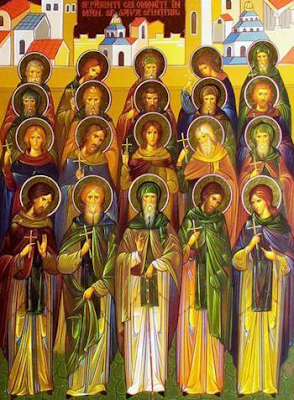 On March 13, around sixty Saracens broke into the Monastery and demanded all the valuables. The monks told them that there was nothing in the Monastery but a meager supply of food and old clothing. Then the Saracens began to shoot arrows at the monks, and they plundered and burnt their cells. Thirteen monks were killed and many wounded.

The Saracens intended also to torch the Monastery church, but seeing a throng of people in the distance, they mistook this for an army sent from Jerusalem. The Saracens managed to get away, carrying off the little they were able to plunder. After the enemy fled, Father Thomas, an experienced physician, began to help those who remained alive. 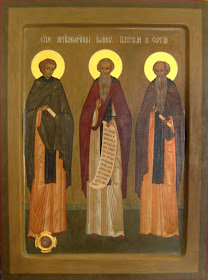 On Great Thursday, March 20, the Saracens again descended upon the Lavra with a larger force and began to beat the monks. The survivors were driven into the church, where they were tortured in order to force them to reveal where any treasure might be hidden. The Monastery was surrounded, so no one could save himself by fleeing. The barbarians seized John, a young monk, who had cared for vagrants. They beat him fiercely, then they cut the sinews of his hands and feet and dragged him over stones by his feet, which tore the skin from the Martyr's back.

The keeper of the church vessels, Saint Sergios, hid the church vessels and attempted to flee, but he was captured and beheaded. Several of the monks nevertheless managed to hide themselves outside the Monastery in a cave, but they were spotted by a sentry on a hill, and they ordered everyone to come out. Inside the cave, Saint Patrick whispered to the brethren huddled with him, "Fear not, I will go alone and meet my death. Meanwhile, sit and pray." 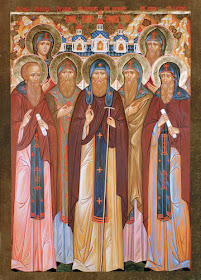 The Saracens asked whether there was anyone else in the cave, and Patrick said that he was alone. They led him to the Lavra, where the captives awaited their fate. The Saracens demanded of them a ransom of 4,000 gold pieces and the sacred vessels. The monks were not able to give such a ransom. Then they led them into the Cave of Saint Savva inside the Monastery walls. They lit a fire on which they piled up dung in front of the entrance to the cave, hoping to suffocate the monks with the poisonous fumes. Eighteen men perished in the cave, among whom were Saints John and Patrick. The Saracens continued to torture those who were still alive, but got nothing out of them. Finally, they left the Monastery.

Later, on the night of Great Friday, the monks hidden in the hills returned to the Lavra, they took up the bodies of the murdered Fathers to the church and buried them there. Father Thomas again tended to the wounded fathers, at which time one died of his wounds, thus rounding the total number of slain monks to twenty. 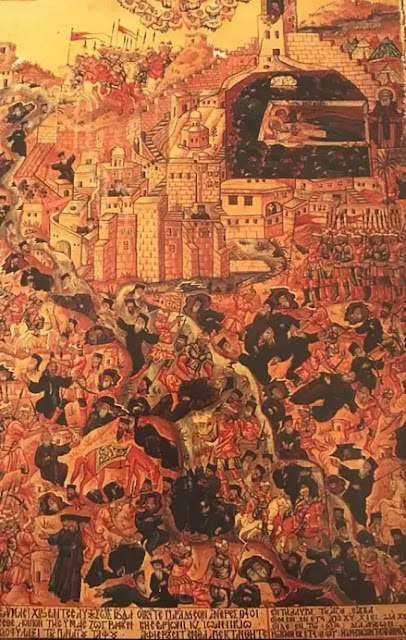 The barbarians who plundered the Monastery were punished by God. They were stricken with a sudden illness, and they all perished. Their bodies were devoured by wild beasts.

The above account was delivered to us by Stephen the Melodist, nephew of John of Damascus.

It should be noted that the slaughter of the Holy Fathers of Saint Savvas Lavra commemorated on May 16 are different from the above-mentioned Holy Fathers, having suffered in the seventh century, during the reign of Heraclius (610-641) in the year 614.

Apolytikion in the Second Tone
Blessed is the earth that drank your blood, O prizewinners of the Lord, and holy are the tabernacles that received your spirits; for in the stadium ye triumphed over the enemy, and ye proclaimed Christ with boldness. Beseech Him, we pray, since He is good, to save our souls.

Another Apolytikion in the Fourth Tone
As holy and chosen lambs of the Saviour, from many lands you were gathered in wise Savvas' flock. You were put to death by the cruelty of the barbarians, and you departed joyfully for the heavenly fold. And now as venerable Athletes you are praying for our souls.

Kontakion in the Fourth Tone
Shunning all earthly and corruptible pleasures, ye chose a life of great ascetical struggles, disdaining worldly beauty and all fleeting fame; wherefore, ye dwell joyously in the Kingdom of Heaven with the Martyrs' holy choirs and the ranks of ascetics. Hence, we revere your memory and cry: From every peril, O Fathers, deliver us.

Another Kontakion in the Second Tone
You dyed your monastic habits with your own martyrs' blood, O blessed and holy fathers. Thus adorned you now stand with twofold crowns of glory, before Christ's throne in the heavenly abodes.