A Greek or a Roman Revolution? 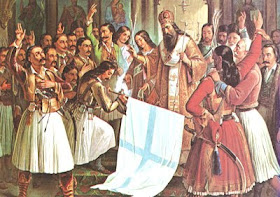 By Basil A. Lampropoulos
We have become accustomed each year on the 25th of March, when we celebrate the anniversary of our national rebirth, to address ourselves to events which are related to the freedom of our nation or, more specifically, to the creation of today’s Hellenic State.

From a pre-fabricated chauvinism prepared by the great powers, we learned to speak of the epic-making of our forefathers of 1821, which tie them in a direct line with antiquity!

In reality we have celebrated this liberation of ours for many years without examining very well what we celebrate. There is something paradoxical here. Do we celebrate our liberation? But which liberation? That of the ancient Hellenes? That is, of our forefathers of the 4th century B.C.? And after that? What became of us during the ensuing years? Where were we? Are we a nation with an ancient and modern history only? What were we doing the years in between?

Here we find ourselves confronted with a falsification of history. When Constantinople, the empress of all cities, fell into the hands of the Ottoman Turks, it was not antiquity that was conquered, but the capital of Romanism, to wit, the capital city of the Roman Empire. And the area we live in is a piece of this empire.

We accepted a strange historical compromise. Did we accept that the City was not our capital? - the Imperial City of Romanism which resulted from the marriage of Hellenic and Roman antiquity? Even today the Ecumenical Patriarch still bears the title Archbishop of New Rome, i.e. Constantinople. In Turkish the Ecumenical Patriarchate is called “Rum Patrikhanesi”, which means Patriarchate of the Romans. This is because the Turkish sources say, and correctly, that when the Turks conquered the City they conquered the heart of Romanism.

We never learned these truths. Our school books teach histories with inaccuracies, written by foreigners like Arnold Toynbee and adopted by some “enlightened intellectuals”, or rather Greeklings. It seems that the great powers wanted to hide this counterfeiting of history from the Romans, and for this reason they led Regas of Velestino to his death in 1798. A glance at the Manifesto and the Charter of Regas demonstrates clearly what we mean by freedom of our nation from the Ottoman Turkish yoke. When Regas wrote Roumeli, the Turkish word for “Land of the Romans”, he meant the whole of the Balkans, because they belonged to the Roman Empire.

Professor John Romanides of the University of Thessaloniki recently published a book entitled Romanism, Romania, Roumeli in which he uncovers these truths which seem stranger to many because they learned a false history in school.

Born of Cappadocian parents, and a Roman to the core, Prof. Romanides was raised and educated in the USA. He became a professor there, and it was there he first encountered falsification of our Roman history. He searched for explanations and expediencies, he studied source and reached certain conclusions, and eventually revealed in this book the historical fraud which began around the 9th century AD and is still being perpetrated today.

Searching through texts he found that two great men, Argyres Ephtaliotis and our own Mesolongite Costes Palamas, had already denounced this forgery as early as 1901. In discussing this with the author I found the materiel very interesting and concluded that these truths should be brought to the attention of the public. I put the question to the Board of Directors of the Costes Palamas Society, who gladly undertook to organize a lecture in Mesolongi, in the heartland of Western Roumeli; where our distinguished speaker would bring to light the opinions for our national poet.

So with great joy I find myself in the exceptionally honored position of presenting to you the speaker who with special pleasure accepted the invitation to present his work, “Costes Palamas and Romanism,” first to us here in Mesolongi, thus paying a debt of honor to the Romans of the Romans of the Great Exodus and at the same time celebrating the 150 anniversary of some of the struggles of Romanism, struggles and yearnings which as it appears have not yet been extinguished.*

* The above introduction was written to be used as an introduction to the lecture of Fr. John Romanides during a “newspaper assignment in Constantinople New Rome (Istanbul), March 5, 1976. The printed lecture came out in Greece on March 21, 1976, the day the lecture was delivered in the ceremonial chamber of the Mesolongi City Hall, and was presented to the audience with the signature of the author and the seal of the Society of Costes Palamas - The Publisher.