Evgenios Voulgaris and the Icon of the Akathist 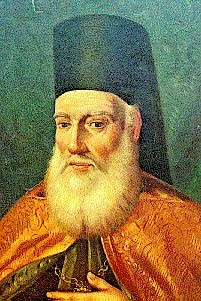 In 1753 Bishop Evgenios Voulgaris was teaching at the Athonite School on Mount Athos. He became very sick with a severe ulcer. His pain was so great that he prayed for death. They brought him to Dionysiou Monastery where there was a doctor with medical knowledge, but nothing helped him. The monks residing there told the groaning Evgenios about the miraculous icon of the Akathist residing at the monastery which was the original that saved the people of Constantinople. Hearing this Evgenios requested that they carry him there because he was bedridden. There he prayed fervently. Suddenly he felt himself being healed, his acute pain ceased, and the tears stopped. Gratefully Evgenios took his pen and wrote the following iambic verse to the Theotokos: "You gave me life which you brought in your arms, bringing life when death was under my arms." 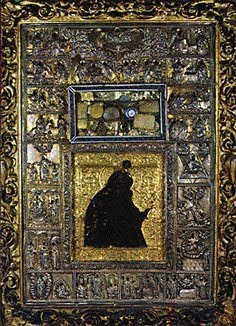