Don't Put Yourself In Despair Over Salvation 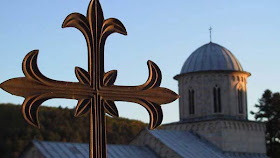 By St. Symeon the New Theologian
If you ignore these things, my beloved one, don’t put yourself in despair, saying:

"I have not seen these things, nor can I ever know them; I will never have the power to reach and rise up to the height of this knowledge, contemplation and cleanness."

"If someone won’t become like this, that is, to put on Christ and see Him as God in this life, and take Him to dwell in himself, then one won’t enter in His Kingdom. Of what use, then, is it to me to fight, even a little, or even to lose the current pleasures?"

Don’t say this; don't even think about it, but if you wish, listen to my advice and I will announce to you the way of salvation, with the help of the grace of the All-Holy Spirit.

First of all, believe with all your soul that whatever we said according to the divine and God-inspired Scriptures, are all true, and that whoever believes in the Son of God has to become this, because He granted us power to become sons of God, and if we want it, nothing can stop us... For it is certain, that if you won’t believe in these, that they happen indeed this way, you won’t ask for them to happen at all, and if you won’t ask you won’t receive. Because He says, "Seek, and ye shall find, ask, and it shall be given you" (Matt. 7:7).

If you believe, follow the divine Scriptures and do what they say and you will find everything without exception as it is written - rather, you will find much more than what is in the godly Scriptures. And what are these? "What eye hath not seen, nor ear heard, neither have entered into the heart of man", the gifts "which God hath prepared for them that love him" (1 Cor. 2:9).

These gifts, if you believe with certainty, as we said, you will see, without any doubt at all, just as Paul, so you too - and not only this, but you will also hear ineffable words, since, as you understood, you will be seized to Paradise, even now. Which Paradise? Where the thief entered together with the Christ, and there now remains.