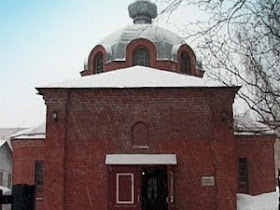 The alleged scam involved false religious ceremonies at St. Elizabeth’s Church, located near Yelizavetinskaya Hospital at 14 Ulitsa Vavilovikh in the north of St. Petersburg. The phony priests also charged locals for access to fake sacred relics of Orthodox saints, including those of St. Nicholas and St. Panteleimon, police say.

“A group of swindlers disguised as Orthodox priests charged relatives of patients who died at the Yelizavetinskaya Hospital for the performance of religious rites at the hospital’s morgue,” the city police press office said Thursday. “A special notice on the wall said that the priests were operating with the blessing of the Metropolitan of St. Petersburg and Ladoga.”

Police said leaflets advertising the services were distributed across the city and that large numbers of worshippers had flocked to the church to light a candle by the fake relics at a cost of 50 rubles ($1.70) each.

“The victims of this scam were literally praying to God knows what,” said Vladimir Vigilyansky, head of the press service of the Moscow Patriarchy. “The scammers appear to have no fear of God whatsoever. The sacred relics that they mentioned are located in some of the world’s most important churches and are hardly ever moved. For example, the sacred relics of St. Nicholas are kept in a sanctuary at the St. Nicholas Cathedral in the Italian town of Bari. Needless to say, it is a world-renowned place of religious pilgrimage, and the relics are never moved.”

The alleged fraudsters were brought to the attention of the police after a series of complaints from local Orthodox believers. They questioned the authenticity of what were being presented as precious sacred relics and had noticed that the priests had even managed to get the name of the Metropolitan of St. Petersburg and Ladoga wrong — the Metropolitan is in fact called Vladimir, and not Ioann as stated on the leaflets.

Police say the confidence trick had been going on for more than five years.

Vigilyansky said that the men disguising themselves as priests were schismatics who had no relation to the Russian Orthodox Church. He said that the Moscow patriarchy had in recent years released numerous statements aimed at exposing the fraudulent practices.

For example, in 2006, there was widespread advertising in St. Petersburg of a temporary display of the holy relics of St. Serafim Sarovsky at St. Elizabeth’s, though the Moscow patriarchy and the St. Petersburg patriarchy both officially declared that the relics were fakes.

Investigators believe the group was founded and masterminded by Grigory Lourie, who was excommunicated from the Orthodox Church for sacrilege in 2003. Earlier, Lourie had been accused of forming a club for people intending to commit suicide and encouraging several of its members to go through with attempts on their lives, though the police found insufficient evidence and eventually dropped the case.

Doctors from Yelizavetinskaya Hospital told reporters on Thursday that the hospital had no connection with the church or any fraudulent practices carried out there.