Two Holy Fathers on the Calendar Issue: Elder Ephraim of Katounakia and Elder Joseph the Hesychast 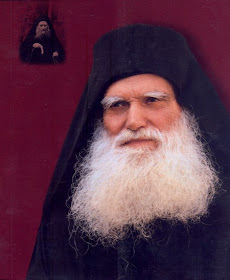 By Elder Joseph of Vatopaidi
When the New Calendar entered into the life of the Church after 1924, the entire Holy Mountain, for reasons of tradition, maintained the use of the Old Calendar, without severing communion with and maintaining dependency upon the Ecumenical Patriarchate of Constantinople, and consequently, with the other Orthodox Churches.

Because of this calendar change, some Athonite Monks - the self-titled "Zealots"- broke their spiritual communion with the Patriarchate and the rest of the Holy Mountain. They would participate neither in Liturgies, nor in festal celebrations, nor even communicate with the rest of the fathers.

Katounakia was one of the centers of the Zealots and Papa Ephraim was one of them. Moved by spiritual zeal, both he and Elder Joseph the Hesychast initially joined the extremist party of the so-called "Matthewites". When an issue arises concerning the faith, naturally fanaticism will rise up.

The grandiose Matthew, who so occupied Athonite monasticism, proceeded from another Matthew, a Cretan monk. Matthew had obvious rebellious tendencies, and thus they readily induced him to take hold of some authority on account of the calendar disorder.

Increasing the degree of fanaticism surrounding the calendar change, and depicting the Church as lapsed, Matthew created that which pleased him. He became "super-orthodox" and worked up his followers with sermons and demonstrations. This still occurs today with some of his followers - a fresh wound to the bosom of the Church.

As always, every source of scandal creates fanaticism and unrest - mostly from ignorance - until the true state of affairs is revealed. It was natural for the fathers in the desert areas to be found among the fanatics, since anxiety and ignorance were prevalent, and because they had an acute fear that perhaps they would betray their faith.

Then, in opposition to the Matthewite harshness, the Florinite moderation appeared. The Florinites avoided the severity of the Matthewites, maintaining a milder stance, even though they were still "zealots". The fathers then turned towards this faction. They chose the "lesser of two evils" as the better even though they were still not at peace with this.

The living Church, unjustly cast aside, was protesting with their consciences, causing them unrest. The solution for them was prayer.

Elder Joseph the Hesychast turned with insistence to his sure refuge of prayer, seeking an answer from on high. "Call upon Me in the day of trouble; I will deliver thee, and thou shalt glorify Me" (Ps. 48:15 LXX), was something that the blessed Elder knew well from his ascetic life.

Falling to his face with tears, pain of heart, and deep humility, he pleaded:

"We have sinned and trespassed against You, O Lord, and we have betrayed Your Most Holy will. Justly You have turned Your face from us, for we have confused and mocked the light of Your Truth. We have closed our eyes to the bedrock of the Truth, Your unswerving and unshakable Church, Your All-Holy Body, which You established amongst us through Your own presence, and which we have handed over to the conjectures of human thoughts and speculation. Remember, All-Good One, Your compassion and mercy towards us, for they are from the ages unto ages."

With pain and persistence, he continued knocking on the doors of God's compassion and mercy, and the All-Good One did not turn away from his humble supplication. As our blessed Elder Joseph related to us:

"During this intense petition, I was overcome by sleep. I discovered myself suddenly alone on one piece of the mountain of Athos that was separated from the rest. It stood in the oceans trembling from moment to moment, in danger of sinking into the sea. I was frightened and thought to myself, ‘Since this has broken off from the whole and is trembling, in a little while it'll sink and I'll be lost.’ Then, with one mighty leap, I found myself on the stable part of the mountain. Sure enough, the small section of rock that I had been standing on was swallowed up by the sea, and I glorified God Who had saved me from destruction! Immediately, I tied in the dream with the issue that had been occupying me and about which I had been petitioning the Lord not to allow me to be deceived in my judgment."

Similarly, while he was praying, Papa Ephraim of Katounakia heard a voice that told him, "In the person of the Florinites, you have renounced the entire Church."

The fathers found peace with this revelation that the Church had not ceased in its living presence. Afterwards, Elder Joseph also heard a divine voice inform him that, "the Church is found in the Ecumenical Patriarchate in Constantinople."

When, at the suggestion of Elder Joseph, they left the zealots and returned to communion with the rest of the Athonite Fathers, they truly came to know the power of Grace in the Mysteries they celebrated.

Papa Ephraim always used to see Divine Grace consecrating the venerable gifts into the body and blood of Christ during the Divine Liturgy. For the entire time he was with the zealots, he saw something like a veil in front of him, hindering him from seeing this Divine Grace distinctly. This veil was withdrawn when he returned to the living Church.

In speaking about this, Elder Ephraim said: "First I, then Old Joseph, received revelations spiritually regarding the calendar scandal; that is, that the living Church is in Constantinople and not in the faction of the so-called zealots. We returned then to the living Church, where the rest of the Holy Mountain also is."

After being reconciled with the Church once again under the Ecumenical Patriarchate, in 1952 they went to the neighbouring brotherhood of Danielaioi to celebrate Pascha. The fathers welcomed them with much love: "Welcome, welcome. Elder Joseph, please take the stasidion [chair in church reserved for the elders]. Father Ephraim, please come and celebrate the Liturgy for us."

"The Danielaioi chanted the hymn 'Theotoke Parthene' (O Virgin Theotokos) on the solea and I, standing in the sanctuary, could almost see the Mother of God; so great and so tangible was the grace I was feeling,' the Elder confessed with nostalgia.

But Father Nikephoros (a companion of the elders), accustomed to their zealot neighbours, started grumbling and getting very upset. The Elder found himself in a difficult position. While praying, he felt that the will of God opposed him. He was frightened then. He consulted Elder Gabriel, the Abbot at the Monastery of Dionysiou, as well as Father Gerasimos, the Hymnographer. They told him: "My brother, obey your spiritual father." In prayer it was even harder. He felt that God had imposed a penance on him. The dilemma was whether to maintain obedience or follow the Church. He was forced to choose the first option, which made us realize that obedience is fundamental to the Church; for the divine founder of the Church "humbled himself and became obedient to the point of death, even death on a Cross" (Phil. 2:8).

Then, he went through a crisis of conscience of another kind. He, who had been informed that he was subject to the Patriarchate, and that the word "Church" means love, which he found in the warm behaviour of Danielaioi; he whose heart leapt for joy when he said the word "Church" like a child's heart leaps when it needs its mother's hug; he who considered Elder Joseph and his brotherhood his own beloved family; how could he now abandon them? Fortunately, these doubts lasted only a few days. He then thought: "In spirit I will always be with the Church, but with my body I will be with the Zealots for a while, as long as my elder is alive."

Thus he made peace with himself. He waited patiently until 1975, i.e. for 23 years. He never gave anyone the right to criticize him. When he finally established his own brotherhood, he left the Zealots forever with great humility.