The Flight of the Theotokos Into Egypt With Christ

By St. Nikolai Velimirovich
The wise men (astrologers) from the East, having worshiped the Lord in Bethlehem, were directed to return to their home another way by command of an angel. Herod, that wicked king, planned to slaughter all the children in Bethlehem, but God saw Herod's intention and sent His angel to Joseph. The angel of God appeared to Joseph in a dream and commanded him to take the young Child and His Mother and flee to Egypt. Joseph did this. Taking the Divine Child and His Most-holy Mother, he traveled first to Nazareth (Luke 2:39), where he arranged his household matters, and then, taking his son James with them, went off to Egypt (Matthew 2:14). Thus the words of the prophet were fulfilled: "Behold, the Lord rideth upon a swift cloud, and shall come into Egypt" (Isaiah 19:1).

In old Cairo today, the cave where the holy family lived can be seen. Likewise, in the village of Matarea near Cairo, the tree under which the Most-holy Theotokos rested with the Lord Jesus, as well as a miraculous spring of water under this tree, are visible.

After having lived for several years in Egypt, the holy family returned to Palestine, again in response to a command of an angel of God. Thus another prophecy was fulfilled: "Out of Egypt have I called my Son: (Hosea 11:1). Herod was dead and his wicked son Archelaus - a worthy successor of him in evil - sat on his bloodstained throne. Hearing that Archelaus was reigning in Jerusalem, Joseph returned to Galilee, to his town of Nazareth, where he settled in his own home. Herod's second son, Herod the Younger, who was somewhat less evil than his brother Archelaus, then reigned in Galilee. 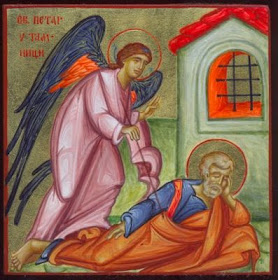 A Story of the Christ Child in Egypt (1)

When the holy family fled before Herod's sword to Egypt, robbers leapt out on the road with the intention of stealing something. The righteous Joseph was leading the donkey, on which were some belongings and on which the Most-holy Theotokos was riding with her Son at her breast. The robbers seized the donkey to lead it away. At that moment, one of the robbers approached the Mother of God to see what she was holding next to her breast. The robber, seeing the Christ-child, was astonished at His unusual beauty and said in his astonishment: `"If God were to take upon Himself the flesh of man, He would not be more beautiful than this Child!" This robber then ordered his companions to take nothing from these travelers. Filled with gratitude toward this generous robber, the Most-holy Virgin said to him: "Know that this Child will repay you with a good reward because you protected Him today."

Thirty-three years later, this same thief hung on the Cross for his crimes, crucified on the right side of Christ's Cross. His name was Dismas, and the name of the thief on the left side was Gestas. Beholding Christ the Lord innocently crucified, Dismas repented for all the evil of his life. While Gestas reviled the Lord, Dismas defended Him, saying: "This man hath done nothing amiss" (Luke 23:41). Dismas, therefore, was the wise thief to whom our Lord said: "Verily I say unto thee, today shalt thou be with Me in Paradise" (Luke 23:43). Thus the Lord granted Paradise to him who spared Him in childhood. 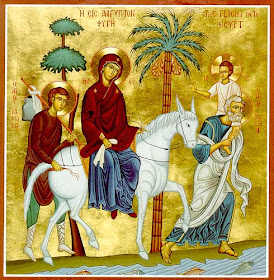 A Story of the Christ Child in Egypt (2)

Both great prophets, Isaiah and Jeremiah, prophesied that the Lord would come to Egypt and that His presence would shake the pagan temples and destroy the idols. Isaiah wrote: "Behold, the Lord rideth upon a swift cloud and shall come into Egypt: and the idols of Egypt shall be moved at His presence" (Isaiah 19:1, cf. Jeremiah 43:12-13).

When the divine refugees came to the city of Hermopolis (Cairo), they approached a pagan temple, and all the idols in that temple suddenly fell down and were shattered. St. Palladius writes of this in his Lausiac History: "We saw the pagan temple there, in which all the carved idols fell to the ground at the coming of the Savior."

In a certain place called Sirin there were 365 idols. When the Most-holy Virgin entered that temple with the Divine Child in her arms, all these idols fell down and were shattered. All the idols throughout Egypt fell in the same manner.

The Holy Prophet Jeremiah, living in Egypt in old age, had prophesied to the pagan priests of Egypt that all the idols would fall and all the graven images would be destroyed at the time when a Virgin Mother with a Child, born in a manger, would come to Egypt. The pagan priests remembered well this prophecy. In accordance with it, they carved out a representation of a Virgin as she lay on a bed and, next to her in a manger, her young Child wrapped in swaddling clothes; and they venerated this representation. King Ptolemy asked the pagan priests what this representation meant, and they replied that it was a mystery, foretold by a prophet to their fathers, and that they were awaiting the fulfillment of this mystery. And, indeed, this mystery was fulfilled, and revealed not only in Egypt but also in the entire world. 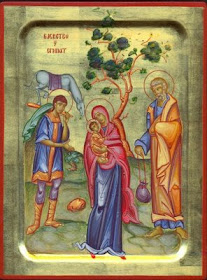 A Story of the Christ Child in Egypt (3)

When the Most-holy Virgin, with her Divine Child and the righteous Joseph, drew near to the city of Hermopolis [Cairo], they saw a tree before the gate of the city. The travelers from afar were weary from their journey and approached this tree to rest a while, even though the tree was very tall and did not offer adequate shade. The Egyptians called this tree "Persea" and worshiped it as a god, for they believed that some divinity was hidden in the tree. In reality, an evil spirit dwelt in this tree.

As the holy family approached the tree, the tree shook fiercely, and the evil spirit, terrified by the approaching Christ-child, fled. Then the tree bent its top down to the ground and worshiped its Creator like a rational creature. Thus the bent tree cast a great shadow, under which the weary travelers rested. From that day, the tree received miraculous healing powers from Christ the Lord to heal every infirmity of men.

Afterward, the holy sojourners went to the village of Matarea. Near the village they saw a fig tree, and, while Joseph went into the village on business, the Most-holy Virgin took refuge under the fig tree with the Lord. And, oh, what a miracle: the tree lowered its crown down to the ground to create a shadow for the travelers, and its lower half split open in such a way that the Mother with the Child could enter and rest. And what is even more miraculous: a living spring of water suddenly opened up near the fig tree. Joseph found a hut in the vicinity, where they settled. There they lived and drank water from that miraculous spring. This was the only spring of living water to be found in Egypt, for all the other water in Egypt comes from the Nile River, which branches off into innumerable canals. And thus, like brought forth like: the Lord Jesus, the Immortal and Heavenly Spring of living water, by His presence called forth this spring of living water from the earth.