Who Wrote the Gospel of Matthew? 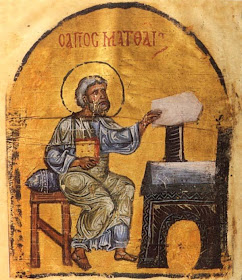 By John Sanidopoulos
Who wrote the Synoptic Gospels? Their titles bear the names of Matthew, Mark, and Luke, but did those men actually draft them? Modern scholarship has called this previous assumption into question, with some going so far as to say that the men whose names adorn the books were long since dead.

When writing on a controversial subject such as this, some ground rules are in order for this discussion to show my approach towards an objective conclusion.

First, while false attribution was not unheard of in the early Christian community (the Gospel of Thomas, not part of the canon, is an example of this), it is unfair for biblical critics to simply make the assumption that the canonical Gospels were misattributed and shift the burden of proof to those who hold to traditional authorship.

Second, anti-supernaturalism as a bias must be set aside. An example of this is the assumption that Matthew (or at least the 23rd chapter) had to be written after the Roman destruction of Jerusalem in 70 AD, because Jesus simply could not have prophesied the destruction of the Temple. According to an anti-supernaturalist, the author of Matthew had to put that in later.

An even more glaring example of this is the belief among literary scholars that mythic traditions take one or two generations to evolve, thus an assumption is made that the Gospels, which proclaim Jesus’ deity, must have been the byproduct of this evolution. Ergo, the Gospels were written and compiled at least a generation or two after Jesus’ life. Such an assumption is philosophical and prejudicial.

With these concerns in mind, let us then proceed with an objective mind.

The early Christian tradition, articulated by many but most notably by the famed theologian Augustine, is that the Synoptic Gospels were written in the order in which they now appear in the New Testament: Matthew, Mark, and Luke. Post-Enlightenment scholarship challenged this assumption, and today mainline and liberal scholars embrace the view that Mark was the first Gospel written.

In addition, mainstream biblical scholars hold that Mark based his Gospel on a source document known as “Q.” There is absolutely no evidence for any Q document, but literary analysis of the Synoptic similarities along with Jewish rabbinical tradition (namely the practice of keeping records of rabbinical teachings) support the hypothesis. New Testament scholars have since added two additional sources: “L” and “M” – for which, once again, there is no hard evidence. These are assumed to be strains of mainly oral tradition.

The authors of Mark (first) and then Matthew and Luke are assumed to have utilized these various sources in putting together their Gospel accounts.

Who wrote the Gospel that first appears in the New Testament canon, the Gospel of Matthew? Doubts about Matthew’s authorship stem largely from the fact that New Testament scholars now widely believe that Mark was written first. Would Matthew, an actual eyewitness of Jesus’ life, rely on the writing of Mark, who was not an eyewitness?

This skepticism, of course, assumes that Matthew primarily utilized Mark, yet this theory of Synoptic Gospel inter-connectivity has never been conclusively established, certainly not to a degree that would have the author of Matthew actually dependent on Mark’s Gospel. Thomas Jefferson utilized George Mason’s Virginia Constitution when writing the Declaration of Independence, but utilization does not equate to absolute reliance. No historian would argue that Jefferson was helpless in his task of authoring America’s independence document absent Mason’s handiwork. Accordingly, even if Matthew had Mark’s Gospel at his disposal, it hardly discredits the notion that the apostle himself wrote the Gospel of Matthew.

The strongest evidence attesting to Matthew’s authorship is the fact that four ancient sources, not counting the title itself, specifically attribute the Gospel to Matthew, the disciple of Jesus. Those sources are Papias of Asia Minor, Irenaeus of Gaul, Pantaenus, and Origen of Alexandria and Caesarea, all significant leaders or writers in the early Christian community. Moreover, the Gospel of Matthew was in wide circulation in the early church, and was circulated as an account written by Matthew, with no apparent question or contestation.

Confronted with this very strong evidence from ancient history, Matthew, the disciple of Jesus Christ, is the author of the first Gospel in the New Testament canon.

Was The Gospel Of Matthew The First Gospel Written, Composed Before 70 A.D., And Originally Written In Hebrew?

Traditionally, the universities of the western world have taught that the Gospel of Matthew was not the first Gospel written, that it was written in Greek, and that it was authored after 70 A.D.

However, as more and more discoveries have been made, those assumptions have been shown to be stone cold wrong.

As researchers are looking into the writings of the early church leaders, they are finding that not only was the Gospel of Matthew most definitely the first Gospel written (almost certainly before 50 A.D.), but that it was originally written in Hebrew!

Just check out what some of the early church writers from the first few centuries of the church have to say on this matter:

Origen (Eusebius, H.E. 6.25.4) "As having learnt by tradition concerning the four Gospels, which alone are unquestionable in the Church of God under heaven, that first was written according to Matthew, who was once a tax collector but afterwards an apostle of Jesus Christ, who published it for those who from Judaism came to believe, composed as it was in the Hebrew language."

Papias (Eusebius, H.E. 3.39.16) "Matthew collected the oracles (ta logia) in the Hebrew language, and each translated (or interpreted) them as best he could."

Irenaeus (Adv. Haer. 3.1.1) "Matthew also issued a written Gospel among the Hebrews in their own dialect while Peter and Paul were preaching at Rome and laying the foundations of the church."

Eusebius (H.E. 3.24.6) "Matthew had first preached to Hebrews, and when he was on the point of going to others he transmitted in writing in his native language the Gospel according to himself, and thus supplied by writing the lack of his own presence to those from whom he was sent."

Epiphanius (ca. 315-403), bishop of Salamis, refers to a Gospel used by the Ebionites (Panarion 30. 13.1-30.22.4). He says it is Matthew, called "According to the Hebrews" by them, but says it is corrupt and mutilated. He says Matthew issued his Gospel in Hebrew letters. He quotes from this Ebionite Gospel seven times. These quotations appear to come not from Matthew but from some harmonized account of the canonical Gospels.

There is also early testimony that Bartholomew, one of the twelve apostles, carried a Hebrew copy of the Gospel of Matthew to India. Two of the earliest Church historians, Eusebius and Origen, wrote about this. "It is reported," wrote Eusebius, "that among persons there who knew Christ, (Pantaenus) found the Gospel according to St. Matthew (which had arrived ahead of Pantaenus by more than a century). For Bartholomew, one of the apostles, had preached to them, and left them (in India) the writing of Matthew in the Hebrew language which they had preserved." In his ground-breaking book, A History of Christianity in Asia, Princeton scholar and author Samuel Moffett reveals that Pantaenus, a church historian and missionary who traveled to India in 180 A.D., discovered the copy of the Gospel of Matthew in Hebrew that Bartholomew had taken with him. (Read here for more.)

There is a similar tradition that the Apostle Barnabas, the follower of the Apostle Paul, also carried with him and was buried with an early version of the Gospel of Matthew. According to tradition, it was through Barnabas that Matthew's Gospel was transmitted and maybe even translated into Greek. Barnabas primarily taught the Jews in Cyprus and it is said in his Acts that he used the Gospel he received personally from Matthew not only to teach, but to work miracles as well. The Acts of Barnabas even mention a probability that Matthew wrote his Gospel in at least two documents, a narrative of miracles and one of doctrines. If this is true it may have been Barnabas that compiled the documents of his fellow apostle. At his death the supposed writer of the Acts of Barnabas, John Mark, saved Matthew's Gospel and hid it away in the tomb of Barnabas. In 478, during the reign of the Emperor Zeno, archbishop Anthemios of Cyprus announced that the hidden burial place of Barnabas had been revealed to him in a dream. The saint's body was claimed to have been discovered in a cave with a copy of the canonical Gospel of Matthew on its breast; according to the contemporary account of Theodoros Lector, who reports that both bones and Gospel book were presented by Anthemios to the emperor. Severus of Antioch examined this Gospel around the year 500, seeking to find whether it supported the piercing of the crucifed Jesus by a spear in Matthew 27:49 which some taught (it did not). According to the eleventh century Roman historian Georgios Kedrenos an uncial manuscript of Matthew's Gospel, believed to be that found by Anthemios, was then still preserved in the Chapel of St Stephen in the Imperial Palace. If this uncial version is Barnabas' copy, then we can assume he translated it into Greek. If not, Barnabas may have been buried with the original Hebrew version. Of course, there is a possibility that he had a Greek version written by Matthew. (Read here for more.) 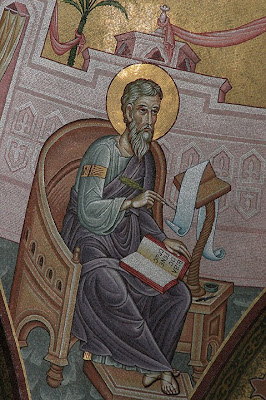