Which Saint Has the Best Cash Flow? 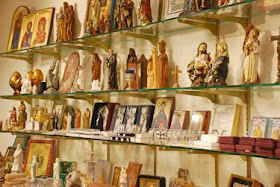 A Question for the Holiday Season: Which Saint Has the Best Cash Flow?
Bruce Watson
Nov 1st 2009
Daily Finance
Earlier this week, Forbes magazine released its list of the top-earning dead celebrities. Although the list highlighted French fashion designer Yves Saint Laurent as the biggest name among those who have shrugged off the mortal coil, it was dominated by entertainers, including Michael Jackson, Elvis Presley, and -- surprisingly -- Rogers and Hammerstein. But what of those who toiled in less lucrative professions? With All Saints Day 2009 finally here, we decided to take a peek at the Christian saints who continue to inspire devotion -- and, yes, cash flow -- long after their passage into the great beyond.

The trouble is that, unlike celebrities, most saints aren't focused on worldly things like profit. While some churches and religious sites charge admission or solicit donations, most are free. For that matter, although religious tracts and books can be copyrighted, the likeness rights of saints generally aren't licensed, which means that tallying the specific earnings of individual saints can be almost impossible.

Even so, it is possible to make a few educated guesses. The most popular saint for the faithful is undoubtedly Jesus' mother. In addition to direct veneration of the Virgin Mary, which inspires sales of numerous medals, statues, candles, scapulars and other items, her visitations in Lourdes, Fatima, Medjugorje, and Guadalupe continue to draw devoted pilgrims from around the world. She has been the subject of thousands of books and pamphlets, and her likeness adorns an almost infinite array of items.

One interesting measure of profitability is film gross While many saints, including St. Bernadette, St. Francis of Assisi, and St. Thomas Beckett, have inspired highly profitable films, the winner in this particular category is probably St. Joan of Arc. The central figure of at least 16 films, the history of Joan of Arc films dates back to almost the beginning of the film industry: the first Joan of Arc movie was produced in 1895. Her last major depiction, 1999's The Messenger, was directed by Luc Besson and starred Milla Jovovich. It grossed over $14 million in the United States.

But what of the lesser-known saints? Phil Dinovo, of Patron Saint Medals.com, pointed out that two of the most popular religious figures are St. Jude and St. Rita, both of whom are associated with desperate causes. For that matter, St. Michael and St. Christopher -- both of whom are associated with the military -- have drawn a great deal of devotion, especially over the past eight years. Given the state of the real estate market, one can only imagine how many distressed homeowners are burying St. Joseph statues in their yards in the desperate hope that his intervention will help them sell their homes.

Dinovo also offered a few surprises. St. Francis of Assisi, who is generally associated with animals, is very big with pet owners, who often have their animals' names carved on the back of the medals. Similarly, St. Gerard, who is invoked by pregnant women in hopes of a safe delivery, is very popular. Other saints wax and wane in popularity, depending upon the season: for example, St. Hubert -- associated with woodsmen -- is often invoked during hunting season.

Joan of Arc's cinematic victories aside, the most popular saint -- apart from Mary -- is probably Christopher, who is invoked by bachelors, teamsters, epileptics, gardeners, porters, sailors, and toothache sufferers. However, his most powerful association is with travel, and thousands of people wear St. Christopher medals or prominently place them in cars. While the Catholic Church removed him from the calendar of saints in 1969, the rumor that his sainthood has been stripped is untrue; he continues to be an acceptable saint for veneration. Good thing, too: his close association with travel makes St. Christopher one of the few religious figures whose medals can be purchased in auto parts stores.

Ironically, two of the most prominent saints have strange or confusing associations. Saint Valentine, the alleged inspiration for Hallmark's biggest holiday, is actually exceedingly obscure: although many early Roman saints were named Valentine, there is still a lot of confusion surrounding the identity of the holy man loosely associated with February 14th. He could be one of three people: a Roman priest, an Italian bishop, or an African martyr. Alternately, he might have never existed.

The association between romance and Valentine's day is also somewhat confusing: although Valentine has been given shared custody of lovers, their original patron saint was St. Raphael, Archangel. For that matter, Valentine isn't really associated with any of the other Valentines day activities: letter writers probably fall within St. Francis de Sales' purview, while candy-makers have St. Macarius and florists are under the protection of St. Dorothea of Cappadocia. In fact, although February 14th has been a Christian love holiday since the 14th century, it is probably a carryover from Lupercalia, a Roman pagan festival that honored the wolves who suckled Romulus and Remus. As part of the holiday, early Romans would indulge in various fertility and mating rituals.

Starting in the late 1700's, February 14th became a day to anonymously exchange love notes; chocolate and roses entered the equation in the mid-1900's. In the face of a modern flower-and-confectionary industry that pushes 58 million pounds of chocolate and rakes in $448 million in candy sales every year, the fact that early Christian martyrs named Valentine had nothing to do with the holiday is relatively unimportant.

The Most Famous Saint of All

The same could be said of the most famous saint of all: Saint Nick. While many people already know that Coca-Cola and cartoonist Thomas Nast share responsibility for the modern image of Santa, common wisdom holds that Father Christmas was originally inspired by St. Nicholas of Myrna. A 4th century Greek bishop who was famously generous to the poor and paid dowries for three pour poor-but-pious maidens, his connection to Christmas may lie in the fact that he is the patron saint of children and merchants (as well as sailors, fishermen, merchants, the falsely accused, repentant thieves, pharmacists, archers, and pawnbrokers). More appropriate Christmas saints might include St. Martin of Tours, the preferred saint of drunken partygoers; St. Claude de la Colombiere, the patron saint of toymakers; and either St. Dorothea of Cappadocia or St. Hubert, who would be good choices for Christmas tree growers.

In a historical lens, the modern Santa Claus bears far more relation to various Slavic and Germanic gods, including the Norse God Odin, who was closely associated with the Yule festival. For that matter, Santa Claus and his dark companion the Krampas could easily fit into the Slavic tradition of Czernobog and Byelobog, the dark and light gods of winter and spring. Still, paganism gave way to Christianity over a thousand years ago, so it is hardly surprising that menacing European idols have been cast aside in favor of a round-faced, jolly present-giver.

As popular as St. Nick is, it's interesting to note that most religious medals and images of saints are made in China; for that matter, so are most plastic flowers, toys, teddy bears and religious statues. Regardless of the saint, the irony may be that the biggest beneficiary of saintly devotion may be a country where the most popular religion is Buddhism.