The Vision of Saint Peter of Alexandria 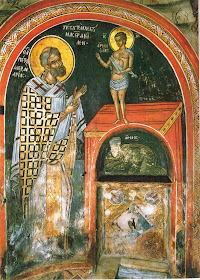 Saint Peter illustriously occupied the throne of Alexandria for twelve years, and, as Eusebius says, "was a divine example of a bishop on account of the excellence of his life and his study of the Sacred Scriptures" (see Eusebius, Eccl. Hist., Book VII, 3 2; Book VIII 11, 13; and Book IX, 6). He excommunicated Arius for his sympathy with the Meletian schism. Melitius, Bishop of Lycopolos, rejected the idea that the lapsed could return to the Church and thus created a schismatic group.

When Arius learned that Saint Peter had been imprisoned, he sent many priests and deacons to him, asking that he receive him back into the communion of the Church before his martyrdom (he did this in the hope of becoming Bishop of Alexandria). When the ambassadors of Arius, among whom were Achilles and Alexander the presbyters, who had not, like Saint Peter, perceived the ruin he would engender, were astonished at the vehemence with which Saint Peter refused to receive Arius again, he revealed to them a dread vision he had seen. In the vision the Master Christ had appeared to him as an adolescent of 12 years of age wearing a white garment torn from head to foot which He held with His hands to His breast to cover His nakedness. When Saint Peter asked the Lord who rent His garment, the Lord answered that it was Arius, and that he must not be received back into communion because he rent and tore asunder His people in the Church. The Lord also told Peter to bless Achilles as his successor and Alexander as Achilles' successor so as to prevent Arius from coming to the episcopal throne of Alexandria. Eventually, the motif of the torn garment became a metaphor for schisms and for the Arian misinterpretation of the Trinity (see the Vespers for the Feast of the Fathers of Nicaea in the Pentekostarion).

The holy hieromartyr Peter was beheaded during the reign of Maximinus in the year 312; he is called the "Seal of the Martyrs," because he was the last Bishop of Alexandria to suffer martyrdom under the pagan Emperors. His successors to the throne of Alexandria, Saints Alexander and Athanasius the Great, brought to final victory the battle against Arius' heresy and Meletius' schism which Saint Peter had begun.

Eucharistic/Liturgical Connotation of the Vision

But in the 11th century, the account took on a liturgical connotation at a time when there was an increase in the number and expansion of liturgical thematic scenes in general.

An image of the Vision appears in an 11th century liturgical roll (Jerusalem, Stavrou 109) where it forms the initial letter of the priestly prayer recited just before the "Our Father" which refers to receiving the Eucharist in a proper manner (i.e. unlike Arius but like Bishop Peter, faithful even unto death). Peter is preseted as a liturgical bishop and the young Christ appears on an altar as the real presence of the Eucharist. Both allude to the theme of Sacrifice and Offering - the purifying sacrifice of martyrdom and the sacrifice of Christ - themes echoed in the Cherubic Hymn (of offering and being offered). The image of the young Christ at this time parallels similar contemporary depictions of the young Christ in the scenes of the Melismos that were often placed in anctuaries from this point onward. The fracturing (melismos) of the Eucharist at the time of receiving was also likened to the fractured garment of Christ in the image.

A Few Fresco Examples of the Vision

1. Church of the Savior, Nereditsa, Novgorod (end of 12th cent.), on north wall of prothesis. 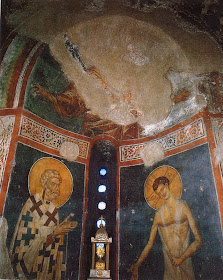 Church of the Virgin Olympiotissa, Thessaly 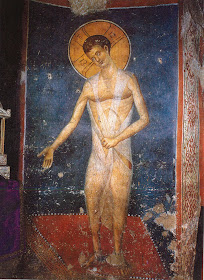 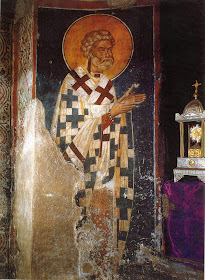 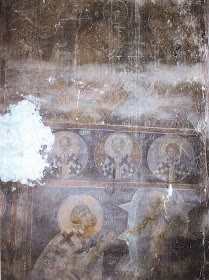 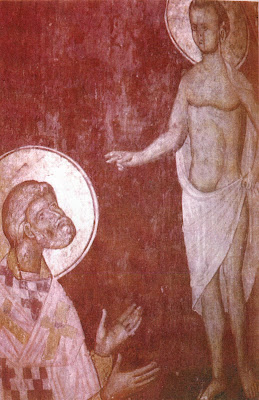 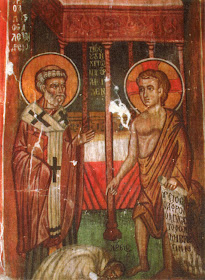 Church of the Holy Cross, Cyprus 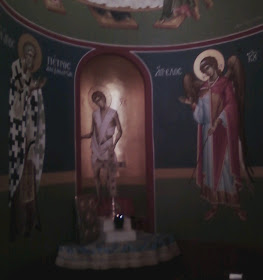 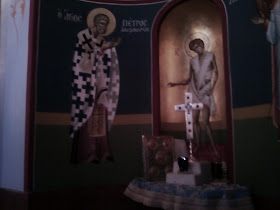 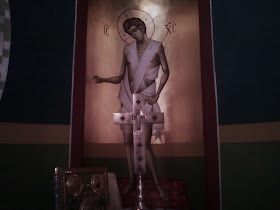 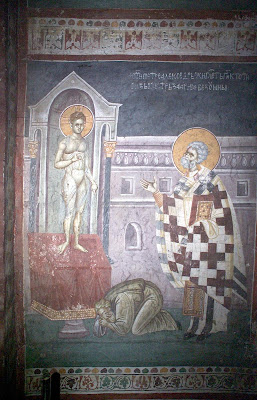 Church of the Virgin, Gracanica, Serbia 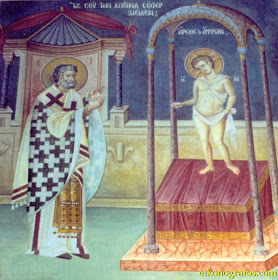