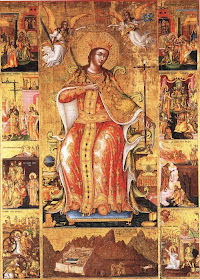 When the property was bought by the nuns, it did not have any water. In 1924 they dug 30 meters, but still could not find any water. At that time a priest-monk from Mount Athos was visiting the Monastery and prayed to St. Katherine with the nuns. At the same time, he lowered the miraculous icon of St. Katherine down the dry well, censed the area, and prayed with deep faith: "If, my dear St. Katherine, you do not bring forth water for us, we will not remove you from here!"

That night, as the nuns were in prayer, a loud noise was heard that was very strange, and the small monastery shook at its foundations. "The Saint is angry", they said, "and will destroy us, because we left her in the dirt." In the morning the priest-monk went down to the dry well to remove the icon. However, on the walls of the dry well he noticed a Cross stuck within. He noticed also that the bottom of the Cross was wet. As he was removing the icon he called to the nuns and proclaimed the miracle. From 1924 until today this well which was once dry has flowed abundantly ever since, and has adequately served the needs of the Monastery.

Many other miracles have occurred at the Monastery of Saint Katherines that are written in a book distributed by the Monastery. 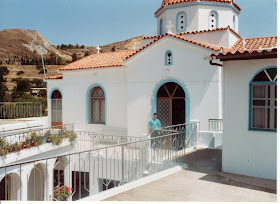 John Foukas is the former president of the Association of Epirotes of Rhodes and native of the village in which the Monastery is located. To raise awareness of this Monastery and his village, at his own expense he recently took the initiative to issue a limited number of stamps with the image of the Monastery of Saint Katherine for it to gain wider profile throughout Greece.

The Holy Monastery of Saint Katherine in Katarraktis Arta, like a precious jewel, adorns the eastern side of Katarraktis, on a small hill called "Karaouli". It is a monastery which lived out many good old days with devoutness, yet mirth and joy would spree every year during the Feast of St. Katherine.

At the entrance of the Monastery the following is inscribed: "In the year 1827 on September 11, the Sacred and Honorable Monastery of Saint Katherine was founded and raised with the assistance of Abbot Gabriel...and the builders Georgakis Giannoulas and Panagiotis Antonious of the village Pramanta."

It is believed that prior to 1827 a smaller church dedicated to the Saint existed where the Monastery was built.

There is also an inscription on the silver covering of the miraculous icon of St. Katherine: "This Holy and Miraculous tablature was written by the assistance and cost of His Holiness the Abbot Lord Dionysios of the Holy Monastery Sihoretziani by the hand of Nicholas Apostolis Papageorgiou and his son Apostolos: 1820, November 20, Kalareites."

The silver covering over the image follows faithfully the iconography of the scene and is a valuable work of silver craftmanship. The icon itself remains in relatively good condition. It is miraculous and is in a shrine in the church of the famous Katholikon of the Monastery of Saint Katherine in Katarraktis.

The long history of the Holy Shrine lead to exist here besides the august silver miraculous icon of St. Katherine, holy relics and other icons of great worth and importance.

For many years, the pious from all over Greece visited the Monastery, kneeling before the august icon of St. Katherine, praying for her intercession, each individually offering their problems to St. Katherine so they may be freed. The people of Katarraktis as well as pilgrims come to piously venerate the holy icons as well as the holy relics.

In the past, the priest of the village, accompanied by some villagers, about ten days before the Feast of St. Katherine, would go door to door with the sacred relics to all the houses of the village, as well as the neighboring villages Sgaras, Scloupsas, Aloni Chioni, and Moutsiatras, so that all the households would receive the grace and blessing of St. Katherine. When the priest visited with the relics, the inhabitants of the village, because they had no money, would instead give corn, beans, lentils and nuts. An assistant of the priest would put all these into a sack and bring it back to the Monastery where it was distributed to the poor for free, and some was sold to help financially with the needs of the Monastery.

Today the holy relics along with the silver reliquaries in which they were kept, as a precious treasure, unfortunately no longer exist because two years ago some sacrilegious persons violated the door of the Monastery and stole them, causing great distress to all the inhabitants of Katarraktis, among many others. Despite expensive investigations by the police, the sacred relics were never able to be found, and so the space exposed for the veneration of them by the faithful remains "orphan".

The Holy Monastery of Saint Katherine from early on became a place of worship and pilgrimage, not only for the residents of Katarraktis but for those of the entire area mainly because of the many miracles received by the faithful.

Important also was the multifaceted social contribution of the Monastery, which gave "present" whenever warranted by circumstances. Even in difficult economic times, which at times it was difficult to cover the costs of its own operations, the doors were open for the sick, the wayfarer, the poor family man, a destitute student, and every person who had a need was lead there, with the assurance that his request would be met, in other words, the Monastery was always a helper.

While it may seem strange, the Monastery of Saint Katherine was a kind of "mental hospital" in earlier years and as such continued to be until the 1950's. Since doctors and nurses, practitioners, clinics and institutions did not benefit them, the parents and relatives of the mentally ill took them to the Monastery with pain and grief and left them to the divine assistance of St. Katherine and the care of the monk in the Monastery. To get well, they would donate money, land, livestock and valuables. In the peaceful surroundings of the Monastery, together with prayer and fasting, and above all faith in St. Katherine, many of the patients after a long stay in the Monastery were cured completely and with joy and optimism, but also full of gratitude to the divine power of St. Katherine, they returned, now healthy, to their homes. There are cases where the mentally ill, after a long stay of treatment in the Monastery, not only were they very good, but in later life one became a teacher of theology and another an engineer.

The seriously mentally ill were tied with heavy chains that exist today. Apart from the chains were manganese, wooden handles and other practical tools, which the monk with the help of priests of Katarraktis adjusted depending on patients.

In the past there was much income driven into the Monastery and given out, which was mainly given by the faithful and the mentally ill. The offerings to the Monastery of money, land, oxen, horse, mule, sheep, goats and other animals clearly demonstrates that St. Katherines had many miracles so that the faithful donated generously, despite their poverty. The elders of the village report that at one time the Monastery with its shepherds had over 400 sheep, and one villager who was mentally ill and became well offered his two oxen to the Monastery.

Today the Monastery is not as it was in olden times, but it still does not cease to radiate spiritual life. The climate and atmosphere created in this sacred space, the faith which it refreshed, the love for St. Katherine, have been many times the cause for many - to those who had not Communed in many years, who in many years had not lived the Orthodox ecclesiastical life, yet came as pilgrims to the Monastery - to change their way of life, become good Christians, and faithful children of the Church.

At this time, the successful caretaking of the Monastery, I would say, is by Elder Metrophanes. Through the program "Pindos", the renovation of the church has been approved, as well as the Cells and the courtyard, and a contractor has been approved for the project. In a very short time the Monastery will change in appearance, like it merits. 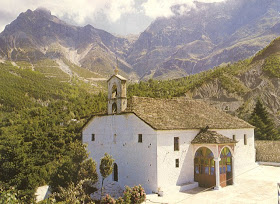 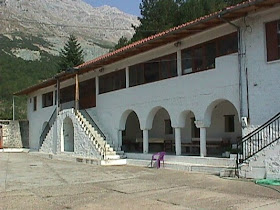 Apolytikion in the Plagal of the First Tone
Let us praise the most auspicious bride of Christ, the divine Katherine, protectress of Sinai, our aid and our help. For, she brilliantly silenced the eloquence of the impious by the sword of the spirit, and now, crowned as a martyr, she asks great mercy for all.

Kontakion in the Second Tone
O friends of martyrs, now divinely raise up a renewed chorus, praising the all-wise Katherine. For, she proclaimed Christ in the arena, trampled on the serpent, and spat upon the knowledge of the orators.
John at 10:11:00 AM
Share
‹
›
Home
View web version