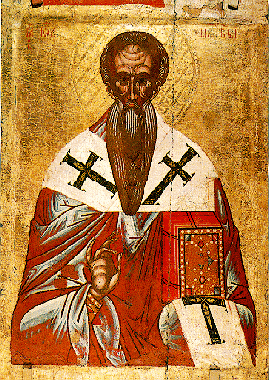 
The Judgements of God

The blessed man always used to talk much about the thought of death and the departure of the soul so that on several occasions those who went in to him with a haughty bearing and laughing face and bold eyes came out from his presence with humble demeanour and a contrite face and eyes filled with tears. He used to say: 'My humble opinion is that it suffices for our salvation to meditate continually and seriously about death and to think earnestly upon the fact that nobody will pity us in that hour nor will anyone travel with us out of this life except our good deeds. And when the angels come hastening down, in what a tumult will a soul then be if it is found unready! How it will beg that it may be allowed a further short span of life, only to hear the words: "What about the time you have lived, have you spent it well?" '

And again he used to say as though speaking of himself, 'Humble John, how will you have the strength to "pass the wild beasts of the thicket", [Ps. 68:30 = LXX 67:31, which reads "epitimeson tois theriois tou kalamou"] when they meet you like tax collectors? Woe is me, what fears and tremors will encompass the soul when it is called to account by so many keen and pitiless accountants?' And indeed the saintly man had especially noted that which was made known through revelation by St. Simeon the Stylite; the words were: 'When the soul goes forth from the body, as it rises from the earth to heaven there meet it troops of demons, each in his own regiment. A band of demons of arrogance meet it, they feel it all over to see whether the soul possesses their works. A band of the spirits of slander meets it; they inspect it to see whether it has ever uttered slanders and not repented. Again higher up the demons of harlotry meet it; they investigate whether they can recognize their pursuits in it. And while the wretched soul is being brought to account on its way from earth to heaven the holy angels stand on one side and do not help it, only its own virtues can do that.'

Pondering on these things the glorious Patriarch would grow fearful and troubled about such an hour, for he also bore in mind the saying of St. Hilarion who, as he was on the point of leaving this life, lost courage and said to his soul: 'For eighty years, O humble soul, you have been serving Christ and are you afraid to go forth? Go forth, for He is merciful.' And the Patriarch would say to himself: 'If he, after serving Christ for eighty years and raising men from the dead and doing signs and wonders, was yet afraid of that bitter hour, what can you, humble John, do or say when you come to face those cruel and pitiless exactors of taxes and tributes? To which will you have the strength to make your defence? To the demons of falsehood, to those of slander, to those of unmercifulness, to those of avarice, to those of malice, to those of hatred, to those of perjury?' And with new doubts rising in his mind he would say: 'Oh God, do Thou rebuke them, for the whole strength of man is of no avail against them; do Thou, Lord, give us as guides the holy angels who protect and pilot us. For great is the fury of the demons against us, great is the fear, great the trembling, great the peril of the voyage through this sea of air. For if, when travelling from city to city on this earth, we require a guide to lead us lest we fall into crevasses, or into the haunts of wild beasts, or into impassable rivers, or into pathless and inaccessible mountains, or into the hands of brigands, or into some boundless and waterless desert and be lost, how many strong guides and divine guardians do we not need when we start on this long journey which is everlasting, I mean the exodus from the body and the journey up to heaven?' These were the teachings, full of God's wisdom, that the blessed man gave to himself and to all; these were his daily thoughts and meditations.

The Judgements of Men

Amongst his wonderful achievements the blessed man attained unto this also, I mean never to judge his neighbour without good reason, or to listen to those who condemned him. Here let me give his teaching on this point from which all may profit.

A young man eloped with a nun and fled to Constantinople. On hearing this the just man almost died of grief. But some time later when sitting in his sacristy with some of the clergy and enjoying a profitable conversation someone happened to speak of the young man who had carried off the nun. Those who were sitting with the Saint began cursing the youth for having destroyed two souls, his own and the nun's. But the blessed man interrupted and stopped them saying: 'No, my children, do not speak like that! For I can prove to you that you yourselves are committing two sins, one because you are transgressing the commandment of Him who said: "Judge not that ye be not judged'', [Matt 7:1] and the second because you do not know for certain whether they are still living in sin, and have not repented.

'For I read the life of an abbot which has the following story. In a certain city two monks were starting on an errand, and as one of the two passed through a square a harlot called out to him: "Save me, Father, as Christ saved the harlot." And he, without a thought of men's censure, said to her: "Follow me!" and taking her by the hand he went out of the city openly in full view of everyone. Thus the rumour spread that the abbot had taken the woman, Porphyria, (for that was her name) to wife. As the two travelled on so that he might put her into a convent, the woman found a baby which had been exposed and was lying on the ground near a church and took it with her intending to bring it up. A year later some of the citizens came to the country where the abbot and Porphyria (she who had been a harlot) were staying, and seeing her with the child said to her, "You have certainly got a fine chick by the abbot", for she had not yet adopted the monastic robe. The men who had seen her spread abroad the report when they got back to Tyre (for that was the city from which the abbot had taken her) that Porphyria had had a fine son by the abbot. "We saw him with our own eyes," they said, "and he is like his father."

'Now when the abbot knew beforehand by revelation from God that he would shortly die, he said to the nun, Pelagia, for so he named her when he gave her the holy habit of a nun, "Let us go to Tyre for I have business there and I want you to come with me." She did not like to refuse, so she followed him and they both came to Tyre with the boy who was now seven years old.

'When the abbot fell ill with a mortal sickness about a hundred people from the city came to visit him, and he said to them: "Bring hot coals!" When the censer arrived full of hot coals he took it and poured all the hot coals on to his robe and said: "Now be assured, brethren, that as God preserved the bush unburnt from the fire, and as the live coals have not even singed my robe, so, too, I have never committed sin with a woman from the day I was born." And all were struck dumb with amazement that his robe was not burnt by the fire and they glorified God who has such servants, though they are unrecognized by men. From the example of the nun Pelagia who had once been a harlot several other harlots followed her and renounced the world and went with her into her convent. For after the monk, the servant of the Lord, who had received her profession, had fully satisfied everybody of his innocence, he surrendered his soul to the Lord in peace. For this reason', the Patriarch continued, 'I warn you, my children, not to be so ready to mock at, or judge, the acts of other people.

'For we have often seen the sin of the fornicator, but his repentance, which he made in secret, we did not see, and we may have seen somebody steal, but we know nothing of the groanings and tears which he has offered to God. We still think of him as we saw him, a thief, a fornicator or a perjuror, but in the sight of God his secret repentance and confession have been accepted, and in His eyes he is honourable.'

Thus all were astonished at the teaching of this virtuous shepherd and teacher.

From "The Life of Saint John the Almsgiver" by Leontius, Bishop of Neapolis.