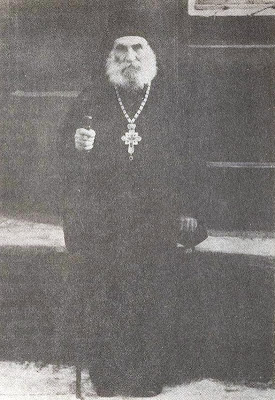 Blessed Elder Gabriel Dionysiatis (1886-1983) was for forty years Abbot of the Holy Monastery of Dionysiou at Mount Athos. He has been called "the abbot of abbots of the twentieth century", and "a great man of Greece and of the Orthodox Faith".

Dr. Constantine Cavarnos, who has written the only existing book in English on this significant elder whom he knew personally, characterizes Elder Gabriel as a "remarkable confessor and spiritual guide, a profound analyst of twentieth century society, and an inspiring writer on many vital topics". Below is a piece he wrote in 1965 and is just one of many examples in which his wisdom is manifested, offered here on the anniversary of his falling asleep which occurred on November 6, 1983.

Spiritual Invocation
By Elder Gabriel Dionysiatis
So many years have passed and we still cannot forget the horror of the Second World War and the foreign occupation [Nazi Germany and Fascist Italy]. What can we remember first? The fear and terror of the barbarian conquerors? The bombarding or the hunger? The hundreds of thousands in Greece who were killed or died of starvation? Remembrance of these things chills the blood of man.

But we will say: Glory be to God, all these things are now past; let us no longer recall them. Yet, without our wanting it, they come back to our mind, because we see the "signs of the times", and we understand that these things that have passed are "the beginning of pains".

Now we read of the "seats of fire" that exist at so many places of our planet. We see the conflict of ideas, which divide the world into mutually hating parts, the haste for the production and storing of fearful nuclear weapons. And we ask: For what are all these things? What will be the end result? Alas...war! Yes, a war incomparably more destructive than the last one. And why? What is the cause? The Apostle answers and says: "The wages of sin is death" (Romans 6:23). Thus, sin is the cause of every catastrophe. Without doubt, the cause are the multiform sins that prevail everywhere - sins in the form of moral decline, of arrogant science and arrogant technological development.

Progress and development are good, but without ideals they do not benefit. What is needed above all is spiritual progress, if man is to live well and become happy. The greatest achievement that mankind could offer would be to approach God and attain union with Him.

Now, however, the withdrawal of men from the Creator is beyond dispute and manifest. It is sufficient that we glance at the whole world and we will be convinced of this. Unbelief prevails, materialism, division, indifference, moral crumbling, and in general spiritual decline. What then? "If ye be willing and obedient, ye shall eat the good of the land; but if ye refuse and rebel, ye shall be devoured by the sword: for the mouth of the Lord hath spoken it" (Isaiah 1:19-20).

These are great truths which have been proclaimed at various times by men of God, Prophets and Saints illuminated by Him, in order that we might know them and come to our senses, and through repentance be delivered from the wrath of God. There are many books that inform us about these truths - the Old Testament, the Holy Gospels, the Book of Revelation of Saint John the Theologian, and other, later works of holy men.

The Book of Revelation says that one third of mankind on the earth will perish. There will survive the "spiritual men", the "elect" - those who have not been carried away by the current of unbelief and the rest of the sins of our age. Those will survive who have "their hearts lifted up to God", and have patiently endured the temptations and the sorrows of the time. Also, those who have repented, who have sought refuge in the mercy of God will be saved, according to the word of God.

For this reason it is necessary that our spiritual condition be improved and renewed. There must be a total turn to God by all of us. The one-sided progress of science and technology will not benefit us. We see clearly that we have surpassed in arrogance and folly those who undertook to build the Tower of Babel. We fly into space and want to reach the stars, while heaviness of souls nails us down to the earth. There is unimaginable waste of money for our self-destruction, while there is incalculable misery in the world! Besides the fearful diseases that scourge people, one third of mankind lives in a state of continuous hunger! How long will God forgive this foolishness and total lack of love?

Beloved brethren, let us not be intoxicated by the rapid advances in technology and scientific discoveries. Let us instead be sorrowful for the "impending wrath of God", and let each one of us work, wherever he may happen to be, for the salvation of his soul and the benefit of his neighbor, entreating God to "waive from us His wrath", as He did for the city of Nineveh at the time of Jonah the Prophet. Only the return to God, faith in Him, and love amongst us, will save us.
John at 11:40:00 AM
Share
‹
›
Home
View web version