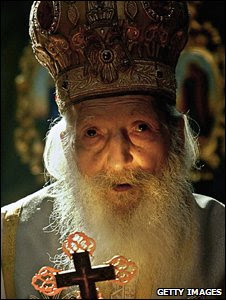 The head of the Serbian Orthodox Church, Patriarch Pavle, has died in Belgrade, the Church has announced.

The 95-year-old patriarch, who became leader of the Church in 1990, was admitted to the city's military hospital two years ago.

He died on Sunday morning. Though he reportedly suffered from heart and lung conditions, the Church did not specify the cause of death.

Most of Serbia's population of seven million people are Orthodox Christians.

Pavle was a respected theologian and linguist, known for personal humility and modesty.

After the fall of communism and rise of Serb nationalism, the Church regained a leading role during his rule. 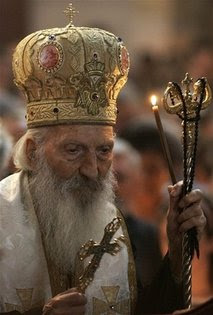 BELGRADE, Serbia – Patriarch Pavle, who led Serbia's Christian Orthodox Church through its post-Communist revival and the turbulent 1990s marked by ethnic conflicts in the Balkans, died Sunday. He was 95.

Pavle, who took over the church in 1990, had been hospitalized for two years with heart and lung problems. He died of cardiac arrest in his sleep, the church and the Belgrade Military Hospital said.

Bells tolled from Serbian churches after the news of Pavle's death and the state-run television aired documentaries about his life. Serbia's government proclaimed three days of national mourning starting Monday.

A respected theologian and linguist also known for personal humility and modesty, Pavle took over the dominant Serbian church just as the collapse of communism ended years of state policy of repressing religion. He also headed the church during the turbulent years of the Balkan wars in the 1990s and the collapse of former President Slobodan Milosevic's regime in 2000.

President Boris Tadic said Patriarch Pavle's death is a "huge loss" for the nation. Tadic said Pavle was "one of those people who by their very existence bring together the entire nation.

"His departure is my personal loss too," Tadic said, explaining he had often consulted with the patriarch about crucial national decisions.

Tadic added that Patriarch Pavle was respected worldwide by both the Orthodox Christian churches and the pope.

The news about patriarch's death was first announced by influential Bishop Amfilohije, who has served as the acting head of church during most of Pavle's hospitalization. State TV showed Amfilohije breaking into tears as he told a gathering of believers that Pavle had died. A sobbing Amfilohije then said a prayer for the Patriarch.

The church said its highest body, the Holy Synod, is expected to meet early Monday and possibly announce when Pavle's successor will be chosen. According to church procedure, at least 40 days will have to pass after Pavle's death for a new patriarch to be elected.

There have been reports of a power struggle within the church over who will succeed Pavle. The favorite for the post among several candidates is Amfilohije, a hard-liner known for his anti-Western and nationalist stands.

Pavle often spoke against violence in the ethnic wars Orthodox Serbs fought in the 1990s against Catholic Croats and Bosnian Muslims during the bloodiest conflict in Europe since World War II.

"God help us understand that we are human beings and that we must live as human beings, so that peace would come into our country and bring an end to the killing," Pavle had appealed — mostly in vain — in 1991 as fighting raged between Serbs and Croats over disputed territories in Croatia.

"It is only the will of the devil that is served by this war," the patriarch was quoted as saying in 1992 but stopped short of naming names, notably not going explicitly against Milosevic.

The Serbian Church eventually broke with its tradition of formal neutrality in 2000, openly urging the Serbian strongman to step down after the regimes humiliating defeat in 1999 following NATO bombing that ended Milosevic's crackdown against ethnic Albanian separatists in Kosovo.

The church's demand for Milosevic's resignation — which he ignored — helped lead to the popular revolt that eventually ousted the autocratic president in October 2000. Milosevic died in 2006 during his trial on war crimes charges at a U.N. tribunal in The Hague, Netherlands.

The patriarch then launched a damage-control campaign for Kosovo, struggling to rally international support for protection of ancient Serbian churches and monasteries that came under attacks by Kosovo's mostly Muslim ethnic Albanians.

Critics, however, faulted him and other Serbian religious leaders for failing to be equally vocal when Serb troops previously destroyed Catholic churches and Muslim mosques in Croatia and Bosnia, or launched major ethnic-cleansing campaigns against non-Serbs in the Balkans.

Pavle was born as Gojko Stojcevic on Sept. 11, 1914, in the village of Kucani, which was part of the Austro-Hungarian empire at the time and is now in Croatia.

From 1944 to 1955, he was a monk at the Raca Monastery in central Serbia. From 1950, he lectured at the Prizen Seminary in Kosovo — the position which he retained until his election as the patriarch on Dec. 1, 1990.

"The Serbian people now have someone to represent them before God better than anyone else," Lavrentije said.