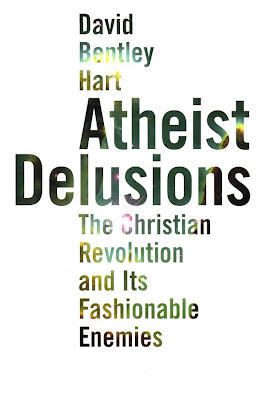 How we got into the atheism culture war in the first place. A review of David Bentley Hart's Atheist Delusions.

Upon seeing the title Atheist Delusions: The Christian Revolution and Its Fashionable Enemies (Yale University Press), I confess to having suspected it would follow the formula of other debunkings of the "Bright brigade," decrying the illogic and inaccuracy of the New Atheists' arguments. Instead, I found someone (in this case, theologian David Bentley Hart) taking a step back from the carnage of the current (pop) culture war to ask bigger questions about how we ended up here in the first place.

Hart, a visiting professor of theology at Providence College, begins by looking at the New Atheist phenomenon, lambasting Richard Dawkins, Christopher Hitchens, and Daniel Dennett et al. for their carelessness with and rhetorical manipulation of philosophy, theology, and history. But that is quickly left behind; in the book's second half, we begin to see the Orthodox theologian's real intent: to offer a counter-narrative of religion's role in human history.

The New Atheists trade in "fruitless abstractions of religion," Hart writes, and reduce Christianity to its history's "bloodthirsty crusaders and sadistic inquisitors"—in other words, to its worst constituent parts. But far from being an obstacle to human flourishing and fulfilment, Hart asserts, Christianity gave birth to the idea of humanity as we know it. Never before the 2,000-year-old religion were slave and free, man and woman, rich and poor, Jew and Gentile welcomed in equal measure and with immeasurable love.

Much of Atheist Delusions reminds readers of the importance of remembering what Christianity has done for us—not just for the believer in personal salvation, but also for the nonbeliever in human history. Would we have had medieval leper hospitals if not for Christ's teachings of kindness and his charge to seek the good of those less fortunate? Would almshouses, orphanages, and hospitals have come into existence without the Christian message that God dwells in "the least of these"? Hart finds no precursor in pagan society that shows that Christ's message was anything but revolutionary.

He also refutes many of the New Atheists' unjustified charges regarding witch hunts, the Inquisition, wars of religion, the destruction of the Alexandrian Library (which supposedly symbolizes Christians' antipathy toward learning), and so forth. You might think, as I did, that saying that much of Christian history has been distorted in this debate is hardly revelatory. But Hart goes further, asserting that itself has a mythology of its own, according to which the Age of Reason came to birth during the Enlightenment (Genesis), scientists such as Galileo have been sacrificed (as martyrs) for the cause, and the superstitions of religion (evil) must be fought in order for science and reason (good) to prevail. Modernity has rewritten the past, editing out the role of the church, the cradle of many triumphs of scientific inquiry.

A good deal of the modernists' mythology parades in the name of education; science and religion are presented as polar opposites, while misinformation about this battle, such as the belief that Galileo suffered at the hands of the church, prevails. Galileo's own irascible character, in fact, was the source of much of his misfortune. This is not to say that science and religion have always existed harmoniously, but where such tensions existed, they were often internal; many conflicts arose because so much early science was done in the church's pursuit of learning.

The New Atheists often dismiss the faith of leading scientists as irrelevant with the line, "everyone believed in God back then." But they forget, as Hart claims, that "we have no real rational warrant for deploring the 'credulity' of the peoples of previous centuries toward the common basic assumptions of their times while implicitly celebrating ourselves for our own largely uncritical obedience to the common basic assumptions of our own." In sum, the modernist mythology needs to be dismantled.

A Hope Beyond Ourselves

Hart describes our world as "post-Christian," stressing that even unbelievers are, for good or for ill, post-Christian. We all have inherited the consequences of Christianity and, most importantly for Hart, its morality and definition of human life. For him, post-Christian culture precariously stands on the brink of being post-human. The God-free Age of Reason promised to usher in a new cultural reality in which liberty, justice, and equality would be protected by rulers who in reality saw human lives as expendable in achieving their ends. For all its "enlightenment," secular society has come with unprecedented violence in the form of revolutions, imperialism, chattel slavery, and ideologically inspired mass murder (one need only think of Stalin and Pol Pot).

Meanwhile, the freedom of the will has become a god unto itself, transcending the Christian "superstition" that every life is of immeasurable value. And with the will so exalted, it is choice itself, not what we choose, Hart writes, that now matters. We see this in many of today's ethical debates—abortion, euthanasia, genetic engineering, economics, and censorship—where choice is invoked frequently and seems to exercise "an almost mystical supremacy over all other concerns."

Hart concludes by asserting that we need a re-education of what it means to be human. We must learn more about the story that we Christians have inherited. In doing so, we must also face the uncomfortable fact that Christianity is not shaping civilization today as much as it once did. "Innumerable forces are vying for the future, and Christianity may prove considerably weaker than its rivals," Hart warns.

But Hart's message is not as disempowering as it may seem: it is a call to action, for learning more of our history better equips us to fight the battle to reclaim it. If Hart is correct that "Christianity has been the single most creative cultural, ethical, aesthetic, social, political, or spiritual force in the history of the West," then we must ask ourselves: Why? Christian hands are by no means free of blood and wrongdoing. As Hart writes repeatedly, "human beings frequently disappoint." We are corrupt and callous, and the temptations of power and conquest have snuffed out the holiness of many. But through the darkness, a glimmer of hope shines, for unlike atheism, Christianity offers hope—a hope of transformation from beyond ourselves.

As we survey modernity's rewriting of history, we must remember this hope as we look to shape the future. For it is the life and death of Jesus Christ that has transcended the ages: for Christians, faith is not merely "a cultural logic but a cosmic truth."

Atheist Delusions is a stimulating and challenging contribution to the New Atheist debate, and is recommended for any believer who wants to confront modern misconceptions about Christianity and its history. I say believer because I think that, although Hart prefaces the work by saying that his prejudices are "transparent and unreserved," occasionally his historical analysis is laced with the rhetorical flourishes of a preacher. His argument is strong, but some "prejudices" might be seen to beg questions. I would not expect a non-Christian to be won over on the neutral grounds of abstract argument. But if "we used to produce better atheists, atheists who had a better arsenal of arguments to make"—that is no reason not to better furnish our own.