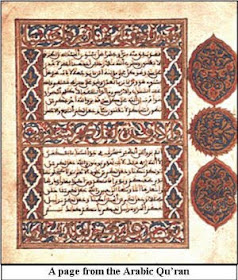 [Following a mediocre (my opinion) visit of the Ecumenical Patriarch Bartholomew to America in which he was often heard to walk a very fine line between Orthodoxy and an extreme compromise, we see in the news story below such a fine line continued to be tread, maybe even misstepped, by his gifting a Koran (Quran) to a Muslim. The Patriarch is obviously a smart man, but this act makes me question how well-rounded his knowledge really is. First he holds up Leo Tolstoy as an Orthodox Christian (which he was not), and now he dares to publicly give a gift of a book obviously inspired by the devil himself (Muhammad claimed it was dictated to him by the Archangel Gabriel, which Orthodox have always interpreted to be a demon and, as St. John of Damascus says, "a forerunner of Antichrist") to a man deluded by its demonic teachings? What kind of Orthodox witness is this? It makes one wonder where his boundaries truly lie. Would he give a Satanic Bible to the High Priest of the Church of Satan? I've read and studied both and see no difference between the two as far as their origins are concerned. I'm not against Orthodox giving Muslims gifts, but I'm perplexed as to how uncreative his gift giving is and why he could not just at least give a Bible since Muslims believe in the Bible too (a reasonable compromise). Anyway, I can rant all day about this, so I'll hold my peace...for now. - J.S.]

Baku, 9 November 2009, Interfax - Patriarch Bartholomew I of Constantinople gave the Quran as a present to the chairman of the Caucasus Muslim Board Allahshukur Pasha-zade for the 60th anniversary.

The book was handed to the Sheik in front of delegations of local Orthodox Churches, Vatican, and Islamic communities worldwide at a solemn jubilee ceremony held in Gulistan palace in Baku.

The head of the Patriarchate of Constantinople Representation at the European Union Metropolitan Emmanuel of France handed the Quran to Pasha-zade and highlighted that this present was a sign of special respect from Patriarch Bartholomew I.
John at 2:07:00 PM
Share
‹
›
Home
View web version