Miracles of the Archangel Michael in Roman Times 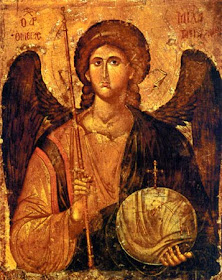 Miracles of the Chief-commander of the Bodiless Host, the Archangel Michael, in Roman Times
In the period after the New Testament, there are also accounts of the Archangel Michael's cures and wonders. Therefore, on this day, we call upon him as the protector of our lives, and celebrate his honored feast with the remembrance of some of his marvels.

The Church of the Archangel Michael in Sosthenion

When Emperor Constantine the Great (r. 306-337) was building Constantinople, it came to pass that he constructed a church dedicated to the Archangel Michael in the surrounding suburb, known as Sosthenion. The account of how this church came to be built is curious indeed. In the outlying suburb, there was a statue of a man with wings. The great Constantine marvelled at the work and wondered what it could mean. He asked his nobles, but no one knew to whom it was dedicated. He then besought God, "Reveal to me after whom the statue was fashioned." At night, the Archangel Michael appeared to him and said, "I am the Archangel Michael, the helper of the Christians, even as I have assisted thee in thy victories over thine enemies. For this cause, do thou build a church in my name, and I shall preserve thee from all thine enemies until the end of thy life." When the emperor awoke, he immediately set about fulfilling the command of the archangel. The church he erected was huge, for which he apportioned considerable revenues. On the feast day of the archangel, Christians from the suburbs were assembling at the new church from the outlying areas. One of the faithful had a child who was deaf and dumb from his mother's womb. The father brought the lad into the church and besought the archangel to heal him. After much supplicating, the archangel hearkened to the prayer of that poor father. During the Divine Liturgy, the child was brought before the icon of the Chief-commander Michael. When the deacon was about to say, "Let us attend," followed by the priest, "The Holies for the holy," the child, instead, spoke up and said, "Let us attend." From that hour, he was healed. The father returned every year to commemorate and thank the commander of the bodiless host.

The Deliverance of Constantinople from the Perils of the Avars, Persians, and Arabs

The Avars, mounted warriors, came to capture Constantinople. They used their swords, long lances, and reflex bows that they might gain the advantage. The hierarch at that time gathered the faithful of the city, and they went to the Church of the Chief-commander Michael, where they entreated God to be delivered from captivity to the barbarians. Then, when the Avars were about to enter the city, the Archangel Michael, as a flash of lightning, appeared in their midst. Out of their intense fear, many of the Avars fell prostrate on their faces, while others took to their heels and retreated. That same night, the archangel appeared to the khan of the Avars and said, "Leave quickly with all thy host, otherwise tomorrow thou shalt die and thy soldiers with thee." The khan, terrified, that same night, departed with his entire army and returned to his own place.

At another time, the Persian armies assembled and besieged Constantinople. They encamped outside the walls and prevented food and supplies from being brought into the city. The populace was in danger of dying from starvation. Having their hopes only in God, they also brought to mind the previous miracle performed by the Archangel Michael. The people went to his church and supplicated him that he might work a miracle as before. Then on the day that the Persians decided to enter the city, as they laid their ladders against the walls, the Archangel Michael appeared to the invaders. Once again, he appeared as lightning, throwing the Persians into a panic. In the commotion created by this visitation, the Persians, in their confusion, began fighting with one another, thinking they were battling the citizens of the city. The Constantinopolitans, beholding the confounded Persians, exited the city, slaying as many as they were able.

At another time, by sea, a multitude of Arab Muslims attacked the city, the strongest citadel in the world. This occurred during the reign of Emperor Constantine IV (669-685) grandson of Herakleios. The Arabs had already ravaged the countryside in Asia Minor, dragging off inhabitants to slavery. They already held Cyprus, Rhodes, and Kos. The peninsula of Kyzikos was also seized, which was in the neighborhood of the capital, thus providing the Muslims with a base for attack. News was then heard that part of the Arab fleet had captured Smyrna and other sections. The Arabs tried again and again to take the city. Once more, the faithful flocked to the Church of the Chief-commander Michael, imploring God and His archangel for help. The archangel hearkened to their cries. He pierced and bore through the Arab ships, causing most of the marauders to die of drowning. After a five-year siege, only three ships out of the entire fleet remained, and they turned and sailed back home in 678.

The Preservation of the City of Akolia

On the Black Sea, the city of Akolia was under attack by the Saracens. They tarried long with their forces outside the city. Not being able to take the city, they decided to depart. There was, however, a certain traitor inside the city who informed against the Christians to the Saracen chief, saying, "The Christians have a church dedicated to the Chief-commander Michael. It lies by the citadel wall. It is there that they supplicate God for His help, and for this reason you cannot launch an attack." The Saracens, receiving this piece of intelligence, set about making war machines to breach the citadel wall. After they had prepared their ropes, rolling battering rams, and catapults, they readied one large boulder to thrust against the narrow church. As soon as it was catapulted, the faces of the emir and his officers, who were responsible for flinging that boulder, turned backwards. Those wretched men wasted no time loading down the camels with plenty of incense, lamps, and oil. They also took silver from the bridles of their horses and went together to the Church of the Archangel Michael. They swore among themselves that they would never come again to Akolia for many years, and that the city would come to no harm. After they had sworn this vow, their faces returned to their proper places.

The Archangel Michael at Colossae and Germia

The Archangel Michael is remembered also for the miracle he performed at Chonae, near Colossae in Phrygia. He parched the waters of the river which the infidels released against his holy shrine and Saint Hermippos. The archangel's large basilica in Chonae, decorated with mosaics, was a center of pilgrimage and great trade fairs.

Now also in Germia, a city in western Galatia, below Mount Dindymon, the Archangel Michael wrought numberless cures. In 454, the consuI of Constantinople, one Stoudios, was sick and near death. No physician could offer him a cure or any treatment. At that time, a certain man, named Goulio, who was from Germia, came to the capital. He visited the sick consul and began recounting how many miracles were taking place in Germio at the archangel's healing spring. Even the little fish, with the aid of the Archangel Michael, were effecting cures. As Stoudios listened to the accounts, he believed that God would help him.

In the company of other ill folk, Stoudios traveled to Germia. Straghtway, as he entered that holy spring, he was cured. Not only Stoudios received healing, but also his entire traveling party. One of the members was suffering from glaucoma, and he too received a swift cure for his eyes. Studios, beholding the number of miracles taking place, then resolved to most of his fortune building a great church to the archangel.

The five-aisled basilica of ashlar masonry with much sculptured decoration still survives in Galatia. He endowed the church also with revenues for its maintenance. The consul also built homes for the sick and aged. All the while, sick people kept flocking to the site of the archangel's healing waters. Having come with faith, they were leaving healed, including many blind folk who recovered their sight, and the lame who were enabled to walk.

The Cure of the Monk Markianos and the Physician

At the time of the restoration of the icons, during the reigns of Empress Theodora (842-856) and her son Emperor Michael III (842-867), there was a certain monk, named Markianos, who was living at the Monastery of the Archangel Michael inside Constantinople. Whenever Father Markianos became ill, he did not take refuge in physicians and medicines. His only recourse was to fall before the icon of the Archangel Michael, who always cured him of whatever ailed him. It happened one time that the monk became gravely ill. According to his custom, he hastened to the icon of the Archangel Michael seeking help. This time, however, the archangel wished to test him, and did not render a cure. The relatives and friends of Markianos came and reproved him for not seeking medical treatment, but he would not listen to their counsel. Unbeknownst to Markianos, they contrived among themselves that they would seek out a physician on his behalf. They found one and learned from him the proper course of treatment and received medicines appropriate to Markianos' condition. They were to administer them while Markianos was asleep. They, therefore, took the drugs and hid them in his head cushion, and waited until sleep should overtake him.

That night, instead of Father Markianos finding rest, those waiting to administer the drugs fell asleep. Father Markianos, not being able to sleep, remained wide awake. It then appeared to him that he saw the Archangel Michael exiting the holy sanctuary of the church, being escorted by two beautiftil and wondrous youths. He walked over to Father Markianos, as he lay on his pillow. Seeing the drugs, he said to the monk, "What are these?" The monk answered, "I do not know, 0 archangel." The chief-commander then said to the youths, "Take these medicines and put them under the pillow of the physician who concocted them." Markianos then observed the youths walking out of the church. The archangel then took oil from the oil lamp before his icon. He proceeded to anoint Father Markianos, who was instantly cured. Father Markianos, sensible of the healing, kept giving thanks to God.

At midnight, the priest went to the church that he might chant the Orthros Service. He found Markianos healthy and restored as before. That same morning, the priest was called to the house of the physician, who had become gravely ill during the night. The priest then recounted all that he had heard from Markianos. The physician, therefore, came to understand the cause of his sudden illness. He rose up, being supported by others, and went to the Church of the Archangel Michael. He remained there all day, lying before the icon. By evening, he was cured, but he did not return to his house or profession. He decided to remain at that church and become a monk, bequeathing all he had to that church.

This and many other miracles were wrought by the commander of the bodiless host, Michael.

Through the intercessions of Thine Archangels and all of the Celestial Host, O Christ God, have mercy on us. Amen.

Apolytikion in the Fourth Tone
O Commanders of the Heavenly Host, we the unworthy beseech you, that through your entreaties you will fortify us, guarding us in the shelter of the wings of your ethereal glory, even as we fervently bow before you crying: "Deliver us from all danger, as Commanders of the Powers on high! "

Above is taken from The Great Synaxaristes of the Orthodox Church - Nov. 8, pp 228-238, Trans. from Greek by Holy Apostles Convent, Buena Vista, Co.