Homily of St. John Chrysostom on the Holy Apostle Andrew 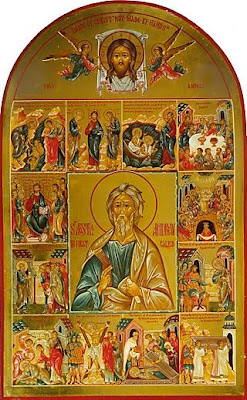 By Saint John Chrysostom
Strong is the net used by the apostles to fish, wondrous the memory of Andrew, and marvelous the commemoration of the net he employed to catch the nations and to lead them to faith in Christ! The seine of those deathless mortals, the apostles, can never be torn by forgetfulness, nor can time destroy their fishing tackle, made not by the art of man but by the grace of God. The fishermen themselves have departed from us, yet neither their gear nor the sweep-net with which they ensnared the world have fallen into decay. They cast and pull in their net invisibly, but the net is clearly seen to be full. They do not make use of a rod that time decays, nor do they let down into the water flaxen cord, which rots with time. No hook that rusts away have they fashioned; no bait have they prepared for a hook with which to catch fish. They do not sit upon a rock washed by waters, nor in a ship that may be sunk by a tempest do they sail. Indeed, it is not fish, by nature irrational, that they catch. Astonishing are the methods of which they make use; new and previously unseen their gear. With them, preaching replaces the rod; their recollections of Christ, the fishing-line; the might of grace, the hook; miracles, bait; and the heavens, from which they cast their line, the rock at the water's edge. Their ship is the holy altar; instead of fish, their catch is kings. They do not spread a net but the Gospel. Their work is guided by divine grace, not by the rules of the fishing trade. They are not helmsmen of ships on the sea but men's guides in life; and the seine, the sweep-net they always employ, is the Cross.

Who has ever seen fisherman from the dead catch living men like fish? O, great is the power of the Crucified One! Wondrous is the beauty of the divine! Mighty are the deeds of the Apostles! Nothing in this life is as great and lofty as the grace given them!
The history of mankind has seen much that is marvelous and surpasses understanding; it has seen spilt blood cry, murder call out as though with a tongue, nature divided and turned against itself in jealousy, brother slay a brother born of the same womb, and the door of death opened by rancor. It has seen Noah's ark remain afloat while the whole world was submerged by the flood and the human race destroyed. It has seen an old man, because of his faith, arm himself against his own son, the offspring of his loins, and take him to sacrifice, although the son was not put to death. It has seen a blessing stolen and God the Creator wrestle with His servant. It has seen envy arise between brethren and slavery lead to dominion over a kingdom. A throne it has seen prepared by a dream and those who betrayed their brother compelled by famine to return to him. It has seen a rod work miracles and a bush covered with flames as if with dew. It has seen Moses the lawgiver give commands to nature. It has seen water made hard as a rock, the bottom of the sea laid bare, a path suddenly opened, and a pillar of cloud by day and one of fire by night serve as guides for a host of people. It has beheld a rod blossom, although the rod was not planted in the earth, and seen manna given as bread from heaven. It has seen the sun halted in its course by a man's prayers and a prophet conceived through the supplications of a barren woman. It has seen a handful of meal made greater than the contents of a granary and a cruse of oil steam forth more abundantly than a spring. It has seen a chariot ascend through the air, carrying away a prophet, and the bones of the dead become a life-giving potion. The history of mankind has seen many great and marvelous things, but all of them pass away and are extinguished like a lamb put out at the rising of the sun. Never has there been anything or anyone like the apostles.
As servants of God the Word, they touched the Incarnate One, Who as God has no form. They followed after Him Who is everywhere present and reclined with Him Who cannot be contained in any place. They heard the voice of Him Who created the world by a word, and caught the world with their tongues as if with nets. Their travels took them to the ends of the earth. Error they rooted up like thistles, and they levelled heathen places of sacrifices like thorns cut down to the ground. They utterly destroyed idols as if they were wild beasts, and drove off demons as though they were wolves. They assembled their flock, the Church, and gathered in the Orthodox like a crop of wheat. But heresies they cast away like tares, while they caused Judaism to whither up like grass and destroyed paganism as if by fire, reducing it to ashes. The Cross was the plough with which they cultivated human nature, and they sowed on that ground the seed of the word of God.
Their deeds shone like the stars; therefore the Lord said of them, "You are the light of the world" (Matt. 5). The eastern horizon is for the Christian man the Lord, born of a Virgin; morning, Him Who gave an example to all by being baptized. The light of the sun is the grace of Christ crucified; its rays the wondrous tongues of fire that appeared at Pentecost. Morning is the age to come; midday, the time when the Lord hung on the Cross. The western horizon is the grave; evening, death, which quickly passes away at the rising of the sun, the resurrection of the dead. "Ye are", it is said, "the light of the world." Let us gaze upon these stars and marvel at their brilliance!

"We have found a treasure!" Andrew cried. "Flee, O Peter, the poverty of circumcision; strip yourself of the ragged cloak of the Law, and cast off the yoke of its written ordinances. Count all things temporal as of little importance. Regard your present life as a dream, and flee Bethsaida, the wretched dwelling of outcasts. Forsake your nets, the gear of impoverished men; your boat, refuge from deluge; fishing, an occupation for times of flood; fish, gluttony's merchandise; the people of the Jews, a nation ever in revolt against God; and Caiaphas, the father of a rebellious nation. 'We have found the Messiah' Whom the prophets foretold and Whose coming the Law heralded like a trumpet. We have found the treasure hidden in the Law. Flee, O Peter, the famine of the written statutes! 'We have found the Messiah', foreshadowed in ancient wonders, Whom Micah beheld sitting upon a throne of glory, Whom Isaiah saw surrounded by seraphim, Whom Ezekiel saw amid the cherubim, Whom Daniel beheld sitting upon the clouds, Whom Nebuchadnezzar saw in the furnace, Whom Abraham received in his tent, Whom Jacob would not release until he had received his blessing, Whose back parts Moses beheld as he stood upon a rock. We have found Him Who was begotten before time and appeared in the last times. Great is this treasure, which can never be exhausted! The riches thereof are not subject to the laws of nature; they exist eternally although they are newly revealed. 'We have found the Messiah, which is, being interpreted, the Christ.'"

Many were they whom God anointed, but all were subject to death. Abraham He anointed, but he moulders in the grave; Isaac He also anointed, but his bones lie in a sepulchre. Jacob He anointed, but he was mortal, and Moses as well, whose body lies in a place known to no one. David was also anointed, but like the others he was death's prey. All alike were captives of death. Only Christ is by nature God. Yet in His compassion He became man, leaving sealed the virginal womb from which he appeared and making of fisherman springs of healing; for His are dominion and the kingdom, and unto Him, together with His blameless and consubstantial Father and the Holy Spirit, are due glory and worship, now and ever and unto the ages of ages. Amen.

This homily by Chrysostom is to be found in St. Symeon Metaphrastes' "Lives of the Saints".