The Epoch of Orthodoxy – an interview with Abbot Ephraim of Vatopaidi 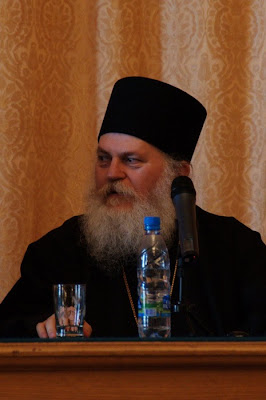 Well, nowadays it is fashionable to speak about the Antichrist. Satan attacks from the left and from the right: he advises man either not to take care for the end times, or he tries to convince him that the end of time comes tomorrow. People apt to think about the End Times are afraid of everything, and that can bring only spiritual harm. A great number of such advice is not God-pleasing. A true Christian has to take care about the moment of his death – our death is our Last Day. Be devoted to our Lord Jesus Christ, and the Church that keeps the Tradition will inform us about the Antichrist, and She is the One that will tell us what to do.
What are Characteristics of a Modern Priest?
Well, his love towards Christ must be endless. Elder Paisios used to say: “If a priest is truly pious and not avaricious, he has eighty percent chance to be successful; but if he loves God, than his chances are one hundred percent guaranteed.”
How Can One Actuate Children to Love Christ?
That can be achieved by condescension, patience and prayer. Elder Porphyrios used to say: “Let us not speak much about God to our children. They can not stand many words. The point is to tell God about our children.” Our youth will have much use from modern monasticism. Regardless of whether one will become monk or not, in a true monastery atmosphere, young people turn to God for a pretty short period of time. They simply think about many things.
On the Spiritual Life in the World
Neither marriage nor monasticism is our purpose; theosis is our purpose. There is no so-called monastic or worldless spirituality. Patristic teaching is one and refers to all. The only difference between the two is the physical relationship that exists in marriage. Everything else is the same. Everyone must face (ascetic) struggle. Everyone can do prayer, services, liturgy, confession and Holy Communion. Asceticism is common for the whole Church. There are families that pray together; they read the Lives of the Saints in their dinning rooms; children seek blessing from their parents; and they kiss their hands. In a word, such families live like monks.
On the Novitiate on Mount Athos
Divine Providence calls someone to become a monk. For that reason novices are being separated, so they can overcome their trials. If monasticism is their way, they stay. Sometimes enthusiasm and outer feelings can induce man to become a novice, but those cannot endure the monastic way of life. A spiritual elder is the one who helps that inward and spiritual progress in a person.
On Holy Communion and Prayers Before Holy Communion
There are some monks that confess every day. Monks receive Communion four times a week – on Tuesdays, Thursdays, Saturdays and Sundays. On other days, there is a strict fast – food is prepared without oil; and on Saturdays food is prepared with oil. In our monastery, sometimes even ten liturgies are served every day and every monk knows when he can receive the Holy Communion. In Greece, Holy Communion has nothing to do with Holy Confession. If a man did not commit deadly sins that can not be absolved, then he can receive the Holy Communion. Holy Communion comes from love of the heart; it is straining of one’s heart. A prayer before Holy Communion is the Canon Before Partaking Holy Communion. Indeed, canons do exist, but their fulfillment must not be taken as a law. As for preparation before Holy Communion, there must be no constraint. The same can be said for the fast. A man is obliged to fast according to the fasting period prescribed by the Church; there is no special fasting rule for the receiving of Holy Communion.
On Miracles Nowadays on Mount Athos
"Blessed are those who have not seen and yet believe." Some time ago a miracle occurred in the Bulgarian Monastery Zografou. Namely, an icon was miraculously taken by the Holy Martyr George to one of the Monasteries churches. But the greatest miracle is – the Church with Her Holy Mysteries.
On Russian Saints who are Venerated on Mount Athos
Well, there are many of them that are venerated on Mount Athos: St. Paisios Velichovsky, St. Sergius of Radonezh, St. Seraphim of Sarov, St. Silouan the Athonite, St. Maximus the Greek (who lived in Vatopaidi), St. Luke of Simferopol, Righteous John of Kronstadt. On Mount Athos there are numerous relics and icons of Russian Saints.
On Iconography – monastic or lay work
Generally speaking, iconography is a monastic occupation; according to condescension, the laity can also be iconographers. An iconographer must fast, must pray and keep vigil. Of course, iconography is not forbidden for pious lay people. There are many lay persons who work in Vatopaidi; for example, they do the wood carving. All in all, there is one thing that is important; and that is to have the fear of God.
About Archimandrite Sophronius Saharov
Father Sophronius is absolutely a man of God. Some Athonite monks like to call him the ”new Gregory Palamas”. As for Father Sophronius, my personal experience witnesses that he was a blessed man, full of divine grace.
On St. Ignatius Brianchaninov
In Vatopaidi Monastery, the works of St. Ignatius Brianchaninov are read. St. Ignatius is a man of prayer, soberness; in a word, he is a ”complete Athonite monk”. We can say that, because Mount Athos is not a place; it is a way of life. Therefore, everyone can be called an “Athonite monk”.
http://www.eparhija-dalmatinska.hr/
John at 2:00:00 PM
Share
‹
›
Home
View web version