Can Psychics Help to Solve Crime? 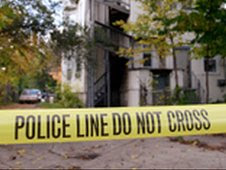 "Quite often the victim in the spirit world will come to me and they often lead you to the name or the person involved in their murder."

Joe Power is a psychic medium who has worked with several UK forces trying to solve tough cases.

When asked if he has helped the police solve murders, there is no hesitation: "without a shadow of a doubt," he says.

When the BBC approached the Metropolitan and Merseyside Police forces they were vague about any dealings with Joe. Merseyside said they could not confirm or deny that they had followed up on his information, or that they had actively contacted him

A spokesperson for the Met said: "We welcome any information from people who feel they are able to assist.

"We are unaware of any inquiries significantly progressed solely by information provided by a psychic medium."

The BBC has approached a number of police forces after speaking to psychics who claim that their information has been acted upon. The vast majority are ambiguous in their response.

But there is no denying that some individual officers are pursuing leads that have arisen from someone professing to have paranormal powers.

Earlier this month it emerged that Dyfed Powys Police had spent £20,000 following a line of investigation in a murder inquiry, based on information passed on by a medium.

The Welsh force was widely criticised for wasting taxpayers' money.
Joe Power says that he was contacted by the Metropolitan Police, asking for assistance on a very high profile murder investigation.

"I got an e-mail from the Met police asking for assistance," Joe Power insists.

"I gave them some information that was coming through the murder victim and people on the other side. Without a doubt they followed up on it."

In an initial statement, the Metropolitan Police denied Joe had any involvement in the case.

However, the Donal MacIntyre programme has seen an e-mail which Mr Power claims was sent to his partner by an officer working on the case.

The officer writes, "can Joe or the victim assist with any landmarks that would assist in narrowing the search down?"

Joe is also asked "what sort of vehicle does the killer use, is it a car or a bike? Can the victim be more specific to Joe as to what happened at 2.10?"

When approached for a second time about Joe Power's involvement with the case, the Metropolitan Police issued a new statement, authorised by the senior investigating officer.

It said: "We do not identify people we may or may not speak with in connection with enquiries. We are not prepared to discuss this further."

This reluctance to be open is something Keith Charles can relate to.

A former Scotland Yard man who now practises as a medium, he says: "I think the police are sceptical, but they have a right to be so because some mediums and psychics make false claims."

"But, ultimately officers don't mind where the evidence comes from as long as it proves or disproves the case."

However, there are plenty who believe that there is no place at all for so-called psychic mediums in police work.

Dr Ciaran O'Keeffe from Derby University has conducted research into psychic detection for 10 years and says, "there isn't any scientific evidence for psychic detectives being able to provide accurate information."

"My advice to psychics is to stop providing information to the police," he says. Explaining that it is difficult for officers to ignore information, Dr O'Keeffe claims that details passed on by psychic mediums are simply "diverting budget and man power away from genuine investigation."

It is not just within policing that the UK shies away from any mention of involvement with the paranormal.

In 2007 the Ministry of Defence was forced to admit that it had spent £18,000 carrying out secret tests to find out whether psychic powers could be used to detect hidden objects. At the time a spokesperson for the MOD said that the study had found that there was "little value" in using the technique in the defence of the nation.

The US military has experimented on a much larger scale with their Stargate Project, which investigated whether 'remote viewing' - the ability to psychically 'see' people and objects from great distances - could be used for potential military purposes.

Some believers have even gone as far to say that US authorities deployed the technique to search for Osama Bin Laden.

But for psychic mediums in the UK, the willingness of police officers to use their information, but not publicly acknowledge them, can be frustrating.

West Midlands Police told the BBC that "officers interviewed Angela McGhee as we would anyone offering information about any offence.

"But she did not have any evidence that was not already known to the investigative team."

Angela rejects the notion she was visited purely out of courtesy: "They said you're telling us things that only people involved would have known; you've told us forensic details."

While police forces across the UK refuse to either confirm or deny their use of psychics in major investigations, it is difficult to gauge how widespread the practice is.

But Joe Power is in no doubt that he and others will continue to play a role in solving crime:

"I predict that in the next 30 to 40 years you will actually get people like me who will find bodies, where there's no question about it.

"The psychic world is moving on very fast and it's getting more accurate with the information all the time."
John at 12:03:00 PM
Share
‹
›
Home
View web version