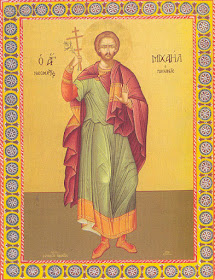 
Athens was conquered by the Ottomans in 1456. It became actualized by 1458 when the Acropolis was captured and turned into a mosque. Athens became an administrative center (kaza) under Ottoman rule. The highest ranks of the city's executives were the voivode (governor) and the kadi (judge). Non-Muslims were allowed to practice their religion with few restrictions, but this had a price in the payment of higher taxes and the inability to hold public office (which was rarely given to Christians).

During the mid-18th century Muslims in Athens numbered to be about a tenth of the population following the Venetian invasion. Edward Gibbon described the inhabitants 'walking with supine indifference among the glorious ruins of antiquity.' Hans Christian Anderson reported seeing black Ethiopian slaves belonging to the Turks, who lived high in the caves in the side of the rock on the northern slope of the Acropolis. Some of the cave entrances would be partially bricked up for added shelter. The Ethiopians used the ruins of the Temple of Olympian Zeus as a mosque.

In 1759 the voivode Hadji Αli Tzistarakis built the mosque which still bears his name on the present Monastiraki Square. The workmen dynamited one of the columns of the Temple of Olympian Zeus to obtain high quality lime for the stucco. The Pasha of Halkis had Hadji Αli Tzistarakis banished for this act, even refusing a bribe of 16,000 piastres which the voivode offered him. The people attributed the outbreak of plague that year to the disease being released by the destruction of the column.

Conditions for the Christian population of Athens worsened during the Russian-Ottoman War of 1768-1774, and especially with the campaigns of the Russian admiral Orlov in the Aegean in which a large number of local Christians took part. During these operations Salamis was taken over by armed Christians, which led to a deterioration of Christian-Muslim relationships in Athens, since many Christians were considered by Muslims to be allies of the Russians. 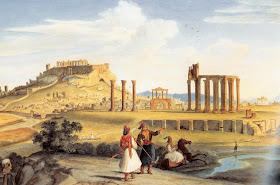 This painting by Johann Michael Wittmer from 1833 shows the dwelling of a Stylite ascetic on the Temple of Olympian Zeus and the Ilissos River in the foreground.
Life of Saint Michael the Neomartyr of Athens

Michael Paknanas (or Baknanas) was born to very poor but pious and faithful parents in the famous city of Athens, Greece in 1753 near Thisseio. Consequently, he did not go to school but learned gardening instead. A devout Orthodox Christian, Michael was a parishioner at the church of Panagia Vlassarou, which today is in ruins in Ancient Agora near Thisseio . During the harvest season Michael would load his donkey with products and peddle them in the villages surrounding the city of Athens. 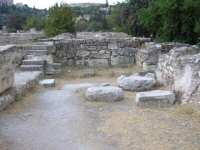 Panagia Vlassarou is exactly west of the Odeon of Agrippa, in the center of Ancient Agora on the edges of Thisseio. Only a part of the church wall survives.
One day when he was eighteen years old, as he was returning from such a journey in the villages of Attica with his donkey, he was seized by some Muslims and accused falsely of transporting gunpowder to some rebel Greeks (klefts) who had become allies of the Russians. The Muslims beat him up and brought him before the kadi who had him put in jail. There, he was visited by other Muslims who threatened Michael and attempted to convert him to the Islamic faith.

A pious and zealous Christian named George, who found out about Michael, was able to visit him in prison and give him much needed support, for Michael was a rather simple and uneducated individual. George feared that Michael may deny his Orthodox faith, seeking to spare his life since he was only 18 years old. After bribing the guards, George saw Michael in his prison cell on his knees praying with tears. For many hours they stayed together and prayed and sang hymns. After giving the young Michael words of encouragement to make firm his faith for martyrdom, they embraced and he departed.

On the way to his execution, Michael asked forgiveness from all the Orthodox Christians he encountered. The site of his execution was to be the Temple of Olympian Zeus. At the site of his execution Michael knelt and bent his head, being tied to one of the pillars of the Temple. The executioner, to frighten and cause him to weaken at the last minute, hit him with the blunt edge of the sword asking the martyr to reconsider. The martyr responded: "I told you, I am a Christian. I refuse to become a Muslim." It is said that this was done a few times to induce fear in Michael. But Michael, full of the Holy Spirit, shouted with courage: "Strike for the Faith!" (Χτύπα για την πίστη!) This outburst infuriated the executioner who struck off Michael's head with one fatal swing of the sword.

Thus Michael the Gardner from Athens, Greece gave his life for the love of Jesus Christ in Athens on July 9, 1771. 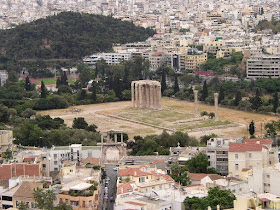 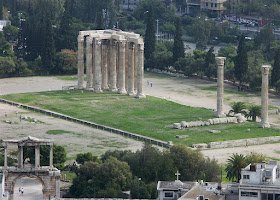 The Temple of Olympian Zeus today. Originally there were 104 Corinthian columns of which only 15 remain standing. One of the columns actually blew down in a storm in 1852. The rest of the columns were used as building material over the centuries.
Today the following inscription at the Temple of Olympian Zeus (the first southeastern pillar) bears witness to St. Michael's martyrdom: "1771 Ιουλίου 9 απεκεφαλίσθη ο Πακνανάς Μιχάλης" (July 9th 1771 Michael Paknanas was beheaded.) Though he was martyred on July 9th, his feast day is celebrated on June 30th and also on July 9th.

Finally, because he was a gardener and recommended a diet rich in fruits and vegetables in his lifetime, on April 4, 2003 the Archbishop of Athens Christodoulos proclaimed him a patron saint of Dieticians and Nutritionists, in addition to Gardeners. Furthermore, a street was named for him (Baknana) in Neos Kosmos in Athens, as well as a stop on the Tram station became named Baknana Tram Stop.

The memory of Saint Michael is especially honored at the Church of the Ascension in Neos Kosmos, Athens and the Church of Saint Philip in Vlassarous (Monastiraki). Since 2010 a Divine Liturgy is served at the sight of his martyrdom on July 9th. Photis Kontoglou painted an icon of the Athenian neomartyr in the Chapel of Saint Irene in Kifisia, Attica which belongs to the Pesmazoglou family. And both Monk Gerasimos Mikragiannanites and Dr. Haralambos Basias of Alexandria have written Divine Services in his honor.


Apolytikion for a Martyr in the Fourth Tone
Thy Martyr Michael, O Lord, in his courageous contest for Thee received the prize of the crowns of incorruption and life from Thee, our immortal God. For since he possessed Thy strength, he cast down the tyrants and wholly destroyed the demons' strengthless presumption. O Christ God, by his prayers, save our souls, since Thou art merciful. 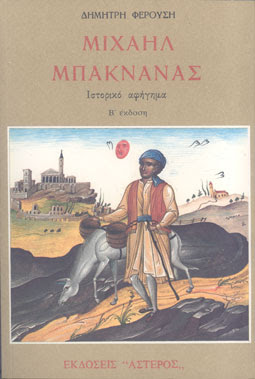