More Proof Against the Myth That Hitler Was A Devout Catholic 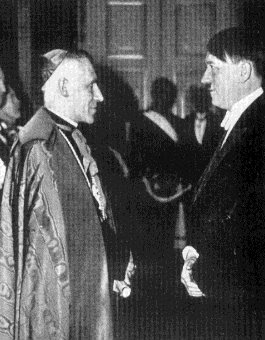 [Atheists often try to deflect arguments against the fact that atheistic ideologies made it possible for the 20th century to be the bloodiest century in history by citing the myth that Hitler committed all his atrocities as a devout Catholic. Though before 1933 we do hear of Hitler making affirmative Catholic statements hoping to win over the support of German Catholics and their conservative values, after 1933 he seems to grow silent on the subject. In 1999 this became the subject of a popular yet controversial book, Hitler's Pope, in which it was claimed that Pope Pius XII was an anti-Semite and helped to legitimize Hitler's Nazi regime. In 2005 this thesis was refuted by Rabbi David Dalin in his book The Myth of Hitler's Pope. Below is presented another study released today which shows that Hitler was far from a devout Catholic, proved by the fact that he planned an assasination attack against Pope Pius. - J.S.]

ROME, JUNE 16, 2009 (Zenit.org)- New evidence published today by the newspaper of the Italian bishops gives more credence to the belief that Adolf Hitler had planned to either kidnap or kill Pope Pius XII.

It has long been conjectured that Hitler had ordered the SS commander in Italy, General Karl Wolf, to seize the Vatican and take the Pope.

Dan Kurzman wrote about it in his 1997 book A Special Mission: Hitler's Secret Plot to Seize the Vatican and Kidnap Pope Pius the XII, which is based on interviews with Wolf himself. Wolf's accounts, however, could never be verified.

New evidence published today by Avvenire now points to the role of the Reichssicherheitshauptamt (the Third Reich's main security office) in devising a plot to take out the Pope.

The newspaper cited the testimony of Niki Freytag Loringhoven, 72, the son of Wessel Freytag von Loringhoven, who during World War II was a colonel in the High Command of the German Armed Forces.

According to the son, days after Hitler's Italian ally, Benito Mussolini, had been arrested at the orders of King Victor Emmanuel III, Hitler ordered the Reichssicherheitshauptamt to devise a plot to punish the Italian people by kidnapping or murdering Pius XII and the king of Italy.

Hearing of the project, Admiral Wilhelm Canaris, head of the German counterintelligence service, informed his Italian counterpart, General Cesare Amè, during a secret meeting in Venice from July 29-30, 1943.

Also present at the meeting were colonels Erwin von Lahousen and Wessel Freytag von Loringhoven, who both worked in Section II of German counterintelligence, which dealt primarily with sabotage.

Canaris, Von Lahousen and Freytag von Loringhoven had all been part of the German resistance against the Nazis.

Amè, upon returning to Rome, spread news of the plans against Hitler in order to block them, which proved successful. The plan was quickly dropped.

According to Avvenire, this testimony coincides with the deposition given by Von Lahousen during the Nuremberg war crimes trials on Feb. 1,1946 (Warnreise Testimony 1330-1430).

Canaris was later dismissed as the head of German intelligence in February 1944, put under house arrest, and then executed in 1945.