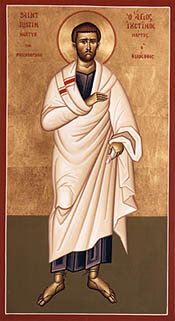 
Chapter I.—Examination of Justin the Philosopher by the Prefect

In the time of the lawless partisans of idolatry, wicked decrees were passed against the godly Christians in town and country, to force them to offer libations to vain idols; and accordingly the holy men, having been apprehended, were brought before the prefect of Rome, Rusticus by name. And when they had been brought before his judgment-seat, said to Justin, “Obey the gods at once, and submit to the kings.” Justin said, “To obey the commandments of our Savior Jesus Christ is worthy neither of blame nor of condemnation.” Rusticus the prefect said, “What kind of doctrines do you profess?” Justin said, “I have endeavored to learn all doctrines; but I have acquiesced at last in the true doctrines, those namely of the Christians, even though they do not please those who hold false opinions.” Rusticus the prefect said, “Are those the doctrines that please you, you utterly wretched man?” Justin said, “Yes, since I adhere to them with right dogma.” Rusticus the prefect said, “What is the dogma?” Justin said, “That according to which we worship the God of the Christians, whom we reckon to be one from the beginning, the maker and fashioner of the whole creation, visible and invisible; and the Lord Jesus Christ, the Son of God, who had also been preached beforehand by the prophets as about to be present with the race of men, the herald of salvation and teacher of good disciples. And I, being a man, think that what I can say is insignificant in comparison with His boundless divinity, acknowledging a certain prophetic power, since it was prophesied concerning Him of whom now I say that He is the Son of God. For I know that of old the prophets foretold His appearance among men.”

Rusticus the prefect said, “Where do you assemble?” Justin said, “Where each one chooses and can: for do you fancy that we all meet in the very same place? Not so; because the God of the Christians is not circumscribed by place; but being invisible, fills heaven and earth, and everywhere is worshipped and glorified by the faithful.” Rusticus the prefect said, “Tell me where you assemble, or into what place do you collect your followers?” Justin said, “I live above one Martinus, at the Timiotinian Bath; and during the whole time (and I am now living in Rome for the second time) I am unaware of any other meeting than his. And if any one wished to come to me, I communicated to him the doctrines of truth.” Rusticus said, “Are you not, then, a Christian?” Justin said, “Yes, I am a Christian.”

Chapter III.—Examination of Chariton and Others

The prefect says to Justin, “Hearken, you who are called learned, and think that you know true doctrines; if you are scourged and beheaded, do you believe you will ascend into heaven?” Justin said, “I hope that, if I endure these things, I shall have His gifts. For I know that, to all who have thus lived, there abides the divine favor until the completion of the whole world.” Rusticus the prefect said, “Do you suppose, then, that you will ascend into heaven to receive some recompense?” Justin said, “I do not suppose it, but I know and am fully persuaded of it.” Rusticus the prefect said, “Let us, then, now come to the matter in hand, and which presses. Having come together, offer sacrifice with one accord to the gods.” Justin said, “No right-thinking person falls away from piety to impiety.” Rusticus the prefect said, “Unless ye obey, ye shall be mercilessly punished.” Justin said, “Through prayer we can be saved on account of our Lord Jesus Christ, even when we have been punished, because this shall become to us salvation and confidence at the more fearful and universal judgment-seat of our Lord and Savior.” Thus also said the other martyrs: “Do what you will, for we are Christians, and do not sacrifice to idols.”

Rusticus the prefect pronounced sentence, saying, “Let those who have refused to sacrifice to the gods and to yield to the command of the emperor be scourged, and led away to suffer the punishment of decapitation, according to the laws.” The holy martyrs having glorified God, and having gone forth to the accustomed place, were beheaded, and perfected their testimony in the confession of the Savior. And some of the faithful having secretly removed their bodies, laid them in a suitable place, the grace of our Lord Jesus Christ having wrought along with them, to whom be glory for ever and ever. Amen. 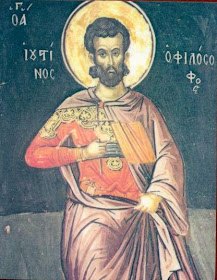 Apolytikion in Tone Four
O Justin, teacher of divine knowledge, you shone with the radiance of true philosophy. You were wisely armed against the enemy. Confessing the truth you contended alongside the martyrs, with them, ever entreat Christ our God to save our souls!

Kontakion in Tone Two
The whole Church of God is adorned with the wisdom of your divine words, O Justin; the world is enlightened by the radiance of your life. By the shedding of your blood, you have received a crown. As you stand before Christ with the angels, pray unceasingly for us all!
John at 12:41:00 PM
Share
‹
›
Home
View web version