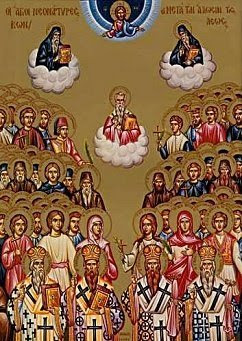 The Orthodox Church celebrates its New Martyrs, known and unknown, who refused to submit to Islam under penalty of death on the Third Sunday after Pentecost

The present article is based on a variety of sources and principally on the biographies (vitae) of 172 Greek Orthodox Neo-Martyrs.

According to several accounts, from the conquest of Constantinople to the last phase of the Greek War of Independence, the Ottoman Turks condemned to death 11 Ecumenical Patriarchs of Constantinople, nearly 100 bishops, and several thousands of priests, deacons and monks (Bompolines, 1952; Paparounis, no date; Perantones, 1972; Pouqueville, 1824; Vaporis, 2000). It is impossible to say with certainty how many men of the cloth were forced to apostatise. Nevertheless, many preferred martyrdom to apostasy, and of the above thousands, several have been canonized and raised to sainthood by the Greek Orthodox Church.

The 172 cases can be classified in 5 major categories of martyrdom. Some martyrs were accused of being political offenders and traitors to the Ottoman state; others were charged with being agitators because they had advocated a better treatment of Christians or because they had spoken on behalf of justice. For example, in the Metropolitan of Corinth, Ζacharias, executed in 1684, was accused of maintaining a correspondence with the Venetians. At his trial Zacharias insisted that he was innocent of the accusation but the Turks beat him cruelly. He was offered pardon on condition that he apostatise to Islam. When the Metropolitan refused, the judge condemned him to death by torture (Delahaye, p. 704). There are 15 more neo-martyrs in this category.

The second category includes martyrs who were native Ottomans and were brought up in the Islamic faith. For some reason, however, either on their own initiative or through the efforts of missionaries they became Christians. Α Muslim was forbidden to deny his faith on pain of death. The same rule applied to all Muslims whether by birth or by conversion. The Roman Catholic missionary Francis Lucas of Smyrna recorded the extraordinary martyrdom of 23 Muslim Turks who were put to death in the year 1649 at Thyatira, Asia Minor. In addition to the anonymous martyrs in this category, we know of five more. Some may have been of Christian ancestry.

The third class of martyrs includes zealous Christians who conducted missionary activity either among Christians trying to sustain them in their faith, or among Muslims and Jews. For example, the monk Makarios, prompted by missionary enthusiasm, decided to preach before a large crowd of Muslims in a market place in Thessalonica. He was apprehended by the Turkish authorities and was thrown into the prison. After several tortures, he was offered pardon on condition that he embraces Islam. When he refused to apostatise; he was beheaded in the year 1527 (Perantones, 1972, 3:325-526). Ιn addition to Makarios, 15 more were put to death because of missionary activity.

Closely related to the previous list, there were some idealistic men who aspired to earn the crown of martyrdom in imitation of the ancient Christian martyrs. The reading of martyrologies and lives of saints was popular in the Greek church under Ottoman captivity and it exerted an influence to the extent that some tried to imitate the early heroes of Christianity. For instance, Romanos, from central Greece, went on a pilgrimage to Jerusalem. While a guest at the Monastery of St. Sabbas, he was inspired by listening to the Acts of the Martyrs, which was read during a meal in the monastery. He desired to become a martyr himself and his desire was fulfilled in 1694 (Delahaye, 1921, pp. 705-07; Perantones, 1972, 3:443-47). Four more belong to this category.

The fifth and most numerous category includes men and women who, for various reasons and at different stages of their life, apostatised from Greek Orthodox Christianity to Islam and later decided to return to their ancestral faith. Guilt not as an aspect of personality structure as psychological theory advocates, but a guilt, which arose from a precise kind of behaviour and from specific circumstances and events. Many of them, seeking atonement for having denied their faith, became martyrs. For example, Demetrios of Tripolis in the Peloponnesos as an orphan entered the service of a Muslim who converted him to Islam. Upon becoming an adult and reflecting on his apostasy, he left Tripolis and sought the advice of a spiritual father. He confessed his apostasy and was received in secret by the church. Nevertheless, he had nο peace of mind and felt the need to atone for his sin with martyrdom. He returned to Tripolis, where he presented himself to his old master as a Christian ready to wash away the stain of his apostasy with his blood. The outcome was that he was put to death on April 14, 1803 (Perantones, 1972, 1:163-65; Delahaye, p. 707). We know by name 52 more who sought atonement by martyrdom.

No less important are the 48 additional neo-martyrs who were condemned to death for diverse reasons. Some were accused of insulting the Muslim faith or of throwing something against the wall of a mosque. Others were accused of sexual advances toward a Turk; still others of making a public confession such as "Ι will become a Turk" without meaning it (Delahaye, 1921, p. 708; Perantones, 1972, 3:409, 421, 470). There are several more whose reasons for condemnation are not stated by the sources. Their names are mentioned but very little else.

Most of the neo-martyrs came from the lower classes and from the provinces. Several professions were represented, including physicians, teachers, and of course, the clergy. But the majority was from various ranks: farmers, artisans, traders, secretaries, merchants, barbers, gardeners, grocers, sailors, household servants, travelling vendors, coffeehouse keepers, and more. The three tables added to this article illustrate the chronological period, geographical origins, and professional background of the neo-martyrs.

Thus, evidence unmistakably indicates that the Turks used both systematic and circumstantial measures to attract Christians to Islam. High political and socially prominent positions were granted to apostates in order to entice Christians to Islamic conversion. Exemption from heavy taxes, including the poll tax, was no less powerful of an enticement. To influence people from lower social strata, apostates from poor Christian families were given riches and honours by the Turks. For men there were some additional allurements to Islam, sexual hedonism, for example. Polygamy was forbidden by the Christian Church but allowed by Islam; concubinage was condemned by Church canons but it was a lifestyle for many Muslims.

ΤΑΒLΕ 3: Distribution by Professions
A profession is not always mentioned. Only four were from wealthy and socially prominent families. Professions are listed as they occur in the alphabetical Arrangement of the neo-martyrs. Total number of professions represented is 35.
Artisans = 24
Clergymen = 34
Shopkeepers = 13
Civil Servants = 6
Physicians = 1
Merchants = 7
Ordinary labourers = 2
Servants = 11
Housewives = 5
Seamen = 5
Farmers = 12
Military men = 1

Apart from Turkish methods and means, there were historical events and religious trends that led Christians to embrace Islam. The progress of the Turks was perceived by some Christians as evidence that their God had abandoned them and was fighting on the side of the Turks. Religious syncretism was one of the most innocent seeming ways by which Christians were persuaded to change their religious creed. This trend was used extensively by dervishes in their religious mission. For example, Badral-Bin, Torlak, Hu-Kemal, and Burklud e Mustafa preached that there was harmony between Islam and Christianity (Vryonis, 1971, pp. 359-59; see also Delahaye 1921 for sources). Christians concluded that since there was a close affinity between the two, why not apostatise to Islam and enjoy worldly privileges as well?

Notwithstanding the material gains that Christians would have enjoyed by converting to Islam, the story of the neo-martyrs reveals that in the course of 400 years there were many who obeyed the dictates of conscience rather than the enticements of secular pleasures. The usual answer of the neo-martyrs to the courts, which offered them conversion as an alternative to death was: "Ι was born a Christian, Ι desire to die a Christian:" The story of the neo-martyrs indicates that there was no liberty of conscience in the Ottoman Empire and that religious persecution was never absent from that state. Justice was subject to the passions of judges as well as of the crowds, and it was applied with a double standard, lenient for Muslims harsh for Christians and others.

The view that the Ottoman Turks pursued a policy of religious toleration in order to promote a fusion of the Turks with the conquered populations (Bréhier, 1947; (Bruader, 1973, p. 769), is not sustained by the facts. Undoubtedly, many Christians, Jews, and members of other religious minorities converted to Islam voluntarily. But what alternative did they have if they wanted to improve their social status? These were those who did not want to be second-class citizens, rayahs or part of the subject class, and became Muslims in order to preserve their social status. That is, those people were not converted by the threat of the sword but by psychological and social constraints.

The relatively few neo-martyrs of the second half of the fifteenth century may be an indication of the rather tolerant attitude of Sultan Mohammed ΙI an attitude, however, determined much more by the horror, pillage, and the destruction which followed the capture of Constantinople. On the other hand, the small number of neo-martyrs between 1700 and 1760 reflects the better conditions and relative peace that prevailed in the Ottoman Empire.

Forced conversions, which also resulted in martyrdom, were often determined by the character and policies of individual Sultans, by internal problems, and by international events. For example, mass-forced conversions were recorded during the caliphates of Selim Ι (1512-1520), the madman's Selim II (1566-1574), and Murat III (1574-1595). On the occasion of some anniversary, such as the capture of a city, or national holiday, many rayahs were forced to apostatise. On the day of the circumcision of Mohammed ΙII great numbers of Christians (Albanians, Greeks, Slavs) were forced to convert to Islam (Finlay, 1877, p. 119). Of the 51 neo-martyrs of the eighteenth century, the overwhelming majority of them (39) were put to death between 1760 and 1796 that is during the Russo-Turkish wars. The great number of neo-martyrs of the nineteenth century is explained on the basis of international events, which affected the fate of the Ottoman Empire. The Greek revolt for independence provided additional ground and pretensions for persecution of Greek Christians. While at no time was toleration of Christians an established rule and it depended upon the arbitrary will of the Sultans and their subordinates, few judges and village rulers paid any attention to whatever privileges had been granted in theory to the rayahs.

Α few more observations. Α church, which was able to produce men and women with a living faith and a commitment to spiritual values and principles could not have been a moribund church, or a church involved only in ritual and concerned with barren tradition, as the Orthodox Church has been portrayed by Western Christendom in the eighteenth and nineteenth centuries. It was not solely an ecumenical brotherly gesture by the President of the Society of the Bolandists when he wrote: "The neomartyrs are the purest glory of the Greek Church, and before these generous witnesses to the faith which we hold in common every Christian should bow" (Delahaye, 1921, p. 712).

(Excerpts taken from this study by Fr. Demetrios Constantelos)