The Ascetic of Boston

Our cities too now have beheld some images of Orthodox witness, at times concealed from the crudeness of worldliness, but strong enough to act as the Gospel leaven.

There lived in Boston in the second decade of the twentieth century a young man by the name of Nikolai Panteleimonov. He was an emigrant from Imperial Russia and possessed the treasure, as he regarded it, of all five volumes of the Philokalia, and many other spiritual books. And he occupied himself in living what these books taught, leading a life of great asceticism as directed by the Orthodox Church. But one day he fell into some grave sin, and upon hearing his confession, the priest put upon him a very severe penance of several hundred, if not thousand, prostrations a day for at least a year. Before this period was over the priest died - and the conscientious young man accepted the uncomplete penance for life.

He worked nights in a factory, and his days he spent locked in his dark attic room in extensive spiritual exercises and long fervent prayer with tears. He would go out for a breath of fresh air only after dusk, roaming the foggy streets. His whole life long he ate nothing but unpeeled boiled potatoes, and salted herring, and he drank nothing but weak tea. Even though his later years were somewhat lax, his whole life was a podvig. In his later years he was made a deacon, but for some reason, despite his absolute devotion to the Church and its every service, he was not in favor. He died a poor man in a city hospital, having himself made all the arrangement for his burial years before. 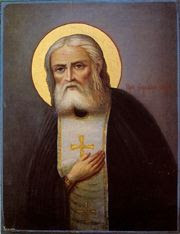 Saint Seraphim of Sarov
In his earlier years, as he later confessed, when he daily made thousands of prostrations, weeping in repentance and experiencing the power of unseen spirits, he was granted visions of St. Seraphim of Sarov. The first time he saw St. Seraphim was at Harvard Square in Cambridge, when he was coming up from the subway, not knowing which way to go find Russian people. He had taken it upon himself to help the poor monks on Mt. Athos by selling their icons to Orthodox Bostonians. In despair he hesitated, not knowing which street to take, when all of a sudden at some distance from him he saw an old man in full monastic habit, in whom he immediately recognized the dearly-beloved image of St. Seraphim. The Saint was looking at him in a friendly manner and was indicating with his hand the direction to take, even going a little way himself. He followed the Saint along Massachusetts Avenue towards Boston. But soon the figure of the Saint, who several times turned back to see if Fr. Nikolai was following, disappeared. In this miraculous way Fr. Nikolai came to very good and pious people who bought the icons he was carrying to sell. The second time the Saint appeared to him was under circumstances unknown to us. The Saint appeared in an area of crowded Tremont Street downtown, motioning for Fr. Nikolai to follow him. The Saint looked very tall and moved swiftly, walking so fast on the other side of the street that Fr. Nikolai could hardly keep up with him; finally, absolutely exhausted, he lost sight of him.

All his life Fr. Nikolai was preparing himself for a monastic life, but never actually entered a monastery, in obedience to the misleading advice of his lay-priest "staretz" who told him the monastic life was too lax.

(Excerpted from: “A Pilgrimage to the Orthodox Holy Places of America: The Fifth Pilgrimage” Orthodox Word, Apr-June, 1967, p. 31-32.) 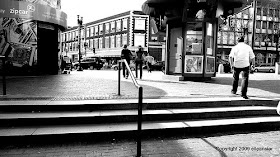 
[Any further information on Nikolai Panteleimonov would be appreciated. Unfortunately he seems to be lost to history as I contacted Saint Herman Monastery in Platina, California who publishes Orthodox Word and no one knew anything about him, including Abbot Herman. The article went on to speak of Holy Transfiguration Monastery in Brookline, Massachusetts, so I contacted them as well and they had never heard of him before either. As the article was written 42 years ago, this does not surprise me. - J.S.]
John at 11:48:00 PM
Share
‹
›
Home
View web version