Below is an account about St. Xenia, whose feast day is celebrated today, written by Fr. George Poulos in his second volume of Orthodox Saints. The Greek Orthodox Church of the Annunciation at 302 West 91st Street in Manhattan is where St. Xenia first revealed herself after centuries of anonymity.
When I traveled to Greece in 1992 I had the opportunity to visit the birthplace of my mother in Kalamata with my sister. We traveled to a female monastery near the Cathedral of the Ypapanti where the nuns are famous for their silk-work. To my surprise I noticed that there were icons of St. Xenia everywhere, reminding me that this city was the place of her martyrdom. I never found out if there is actually a church or chapel dedicated to St. Xenia in Kalamata, though I later found out that a chapel was built in her honor a year later in 1993. 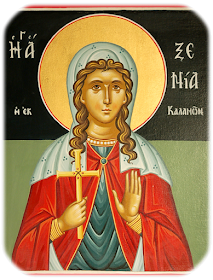 By Fr. George Poulos
One of the sweetest saints in all Orthodoxy remained for seventeen centuries in comparative oblivion unknown, unhonoured, and unsung -- until she chose, at the bidding of God, to reveal herself to a humble priest, in the bustling City of New York.
The name of this Greek girl, who had been sainted but ignored for altogether too many centuries, was Xenia; and the name of the devout Christian to whom she made herself known was the pious Father George Nasis, the highly respected priest of the Greek Archdiocese Annunciation Church in New York City.
Why Xenia remained screened from Greek Orthodoxy for so long a time is attributed to the will of God, the same will that selected a comparatively obscure twentieth-century priest as the herald of the unacknowledged saint. The amazing disclosure would have been more plausible had some archaeologist unearthed St. Xenia's earthly remains, but that was not the choice of the Lord whose acts often puzzle the will of man, but whose truth is borne out in one way or another. The comparative simplicity of the occurrence merely dramatizes the way of heaven and the truth of Jesus Christ.
In yet another incredible incident, Father Nasis acquired laurels which he never wished for and which he thereafter chose to minimize rather than exploit. In one of his customary periods of meditation and prayer there appeared before him a very lovely girl who announced herself as Xenia, a martyred saint of the Church. Not only did she reveal herself for the first time in 1700 years, but she bade the good priest to paint her likeness, asking that in the icon her hands appear clasping a Cross.
At first Father Nasis kept the incident to himself, lest he be ridiculed; but finally he could contain himself no longer. He told his superiors about the appearance of St. Xenia with such conviction that scholars went in search of her in ancient manuscripts, even going back to the oldest of calendars in a vain effort to find the name Xenia mentioned. The credibility of the priest was on the wane when at long last St. Xenia was found in an ecclesiastical work entitled "O Megas Synaxaristes," comprising twelve volumes of the history of the saints of Orthodoxy by the scholar and monk, Victor Mattheou. In such a massive work Xenia was not easily found, but in the end Father Nasis was vindicated.
Mattheou's work describes Xenia as having long, golden-blonde hair, blue eyes (as witnessed by Father Nasis), and beautiful features. Moreover, when she was born in 291 AD, to parents named Nicholas and Despina, in the town of Kalamata, Greece, it was determined that she be raised in the faith of Jesus Christ. At maturity her depth of faith outshone her physical beauty, and she was looked upon with great admiration by the Christian community.
The roving eye of Magistrate Domitianos of Kalamata happened to fall on the lovely Xenia who stirred within him more than admiration. It was love at first sight and he soon offered a proposal of marriage. This proposal was rejected, however, because Domitianos had refused to accept Christ and clung to ancient idolatry with a tenacity which Xenia saw as folly and superstition. It was decided that a prison would change her mind. All else having failed, she was jailed on spurious charges with the stipulation that she could be released if she changed her mind.
When months of incarceration and abuse failed to move Xenia, she was put to death. Soon after, she was sainted because of the many miracles attributed to her, and was given a feast day on May 3rd. This date somehow failed to appear on the Greek Orthodox calendar, although it is a matter of record as indicated by the research of the monk Mattheou.
The icon of St. Xenia still adorns the Annunciation Church and has for forty years been the site of miracles, and miracles in this twentieth century have been hard to come by. Father Nasis, who never sought public acclaim and managed to remain his humble self throughout, was a priest of the Annunciation Church for more than thirty years, passing on in 1974. His many writings, and supplications in honor of St. Xenia give testimony to his faith. His discovery remains in his beloved church, and many a gaze will be fixed upon the sweet St. Xenia who was cloaked in anonymity for seventeen centuries, but whose memory will now be honored for as long as there is Greek Orthodoxy. 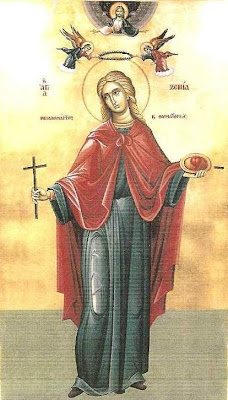