The Orthodoxy of Tom Hanks 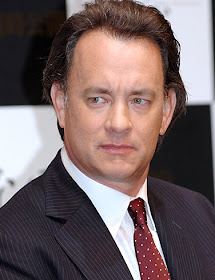 An interesting article recently appeared regarding Tom Hanks and his happiness in being Greek Orthodox (see article below). But how Orthodox is Tom Hanks? Though he is not very vocal about his Orthodox faith, we can get a few glimpses of his Orthodoxy through his interviews and many successful films.

Tom Hanks was an adherent of a number of different Christian denominations while growing up, including Catholic, the Church of Jesus Christ of Latter-day Saints (Mormon), Nazarene, and a Fundamentalist Christian group. His jump from one faith to another mainly was due to the various relationships his divorced parents got into that left him with a very troubled and confused childhood. From an interview published in George magazine, April 1998:

"The major religion I was exposed to in the first 10 years of my life was Catholicism. My stepmother became a Mormon. My aunt, whom I lived with for a long time, was a Nazarene, which is kind of ultra-super Methodist, and in high school, all my friends were Jews. For years I went to Wednesday-night Bible studies with my church group. So I had this peripatetic overview of various faiths, and the one thing I got from that was the intellectual pursuit involved. There was a lot of great stuff to think about. What were the four spiritual laws? Are you a post-tribulationist or a pre-tribulationist?"

Hanks joined the Greek Orthodox Church when he married his wife Rita Wilson in 1988 and has since found his stability there. They attend Saint Sophia's Greek Orthodox Church in Los Angeles and his spiritual father was Fr. Robert Stephanopoulos (his son George is the known political commentator and his daughter is a nun of the ROCOR church in the Holy Land). Tom has stated that he enjoys being Orthodox because the people at his church don't bother him too much and the atmosphere helps him meditate on the bigger questions. Furthermore, Tom and his family are well-known for attending the daily services of Holy Week.

Rita Wilson has written about various Greek Orthodox traditions and they were both producers in the highly popular film My Big Fat Greek Wedding by Nia Vardalos. Vardalos' film (to be released June 5, 2009) My Life In Ruins, a comedy about a Greek-American tour guide in Greece, is also produced by Tom Hanks by his studio The Playtone Company. This same studio also produced Mama Mia! which is set in Greece. All these movies reflect the faith and heritage of his wife Rita, while Hanks presents more subtle theological messages in his films that have not been without controversy. 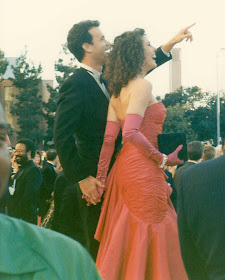 Hanks is most controversial for his role as Robert Langdon in the film The DaVinci Code as well as Angels and Demons. While these books and movies promote theological heresy and historical revisionism, Hanks has always promoted these movies as having no basis in fact and endorses them as a means to ponder the big questions of life. Regarding what these questions are, Hanks says:

When asked whether his wife Rita had any qualms about a story that has been condemned by Greek churches, he said: "No, absolutely not. My heritage, and that of my wife, suggests that our sins have been taken away, not our brains."

When asked about his personal views on God, Hanks is far from dogmatic and Orthodox in his thinking. It's a very personal matter to him and his upbringing probably had a lot to do with his inclusivistic approach to the subject. He says:

"My parents divorced so often that I've seen a lot of different sort of religions down the line. My wife is Greek Orthodox and I've been converted. My kids have been baptized in the same font in which she was baptized at our cathedral in town. But I still believe in being able to leave the heavens to those who want to interpret the heavens as they see fit."

This "open-minded" attitude even steers into moral issues. In 1993 Hanks starred in a film called Philadelphia revolving around HIV/AIDS, homosexuality and homophobia which earned him an Academy Award for Best Actor In A Leading Role. This role made Hanks into a Gay Rights icon which he proudly embraced. In his acceptance speech he said the following about his role and his inspiration:

"I would not be standing here if it weren't for two very important men in my life. Two that I haven't spoken with in a while but I had the pleasure of the other night: Mr Rawley Farnsworth, who was my high school drama teacher, who taught me to act well the part, there all the glory lies.

And one of my classmates under Mr Farnsworth, Mr John Gilkerson. I mention their names because they are two of the finest gay Americans, two wonderful men that I had the good fortune to be associated with, to fall under their inspiration at such a young age. I wish my babies could have the same sort of teacher, the same sort of friends.

And there lies my dilemma here tonight. I know that my work in this case is magnified by the fact that the streets of Heaven are too crowded with angels. We know their names. They number 1,000 for each of the red ribbons we wear here tonight.

They finally rest in the warm embrace of the gracious Creator of us all. A healing embrace that cools their fevers, that clears their skin, and allows their eyes to see the simple, self-evident commonsense truth that is made manifest by the benevolent Creator of us all, and was written down on paper by wise men, tolerant men, in the city of Philadelphia 200 years ago. God bless you all, God have mercy on us all, and God bless America."

The revelation about his gay teacher inspired the 1997 film In and Out, starring Kevin Kline as an English Literature teacher who is outed by a former student in a similar way. 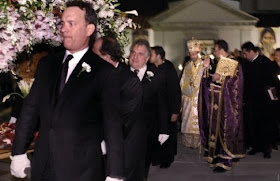 Furthermore, Hanks is very open about his approval of same-sex marriage. According to Wikipedia:

"Hanks was extremely public with his opinion and opposition to Proposition 8 that amended the California constitution to define marriage as a union only between a man and a woman. Hanks and those in opposition raised over USD$44 million in contrast to the supporters' $38 million, but Prop 8 passed with 52% of the vote.

Hanks went on to blame supporters of Prop 8 as un-American and attacked the LDS (Mormon) church members — major proponents of the bill — for their views on marriage and their role in supporting the bill. About a week later, Hanks apologized for the remark, saying that nothing is more American than voting one's conscience, and that is what the supporters of Prop 8 did."

As far as Tom Hanks being an Orthodox Christian, I would say for him it is more about being part of a faith and cultural tradition than anything else. It can be best symbolized from a famous scene in My Big Fat Greek Wedding when Toula’s fiance is baptized in a rite that is a complete mystery to him. Afterwards, he shows her his new Cross and says: “I’m Greek now.”

For someone who attends the daily services of Holy Week, though reportedly few other times throughout the year, it's unfortunate Tom is not more vocal about his Orthodox faith. Could it be because there are contradictions between his faith as an Orthodox Christian with his inclusivistic attitude regarding who God is as well as his moral stance in favor of same-sex marriage? Could it be his lack of education in Orthodoxy? Maybe he doesn't want to sound as snobby as some of his fellow celebrities involved in Scientology and Kabbalism? Perhaps it is all of the above, and he also wants to maintain an individualist attitude with regards to his philosophical outlook on life, and not be bound to the particular views of his faith. At the end of the day, he is still a great entertainer who aims to please his audience and in many ways has been formed within an individualistic and liberal Hollywood milieu. 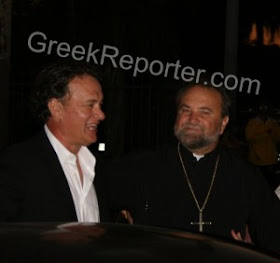 Hollywood actor Tom Hanks appreciates his membership in the Orthodox Church and intends to raise his four children in similar vein.

"I am aware that it is vitally important to come to church and contemplate those substantial questions put up by Orthodoxy and the answers it offers," Hanks said in an interview published by Argumenty i Fakty.

According to him, when a man arrives at a decision to marry and have children, "it is crucial to define spiritual heritage of a future family at this stage."

"I consider Greek Orthodoxy my own spiritual heritage. I got married in the same church where my wife had been baptized. My children were baptized in the same baptismal font as my wife," Tom Hanks said.

According to Hanks, this makes his family "a part of the large universal Church".

"We go to church on rare occasions, but when we do, we have dinner together and discuss our feelings after that," he added.